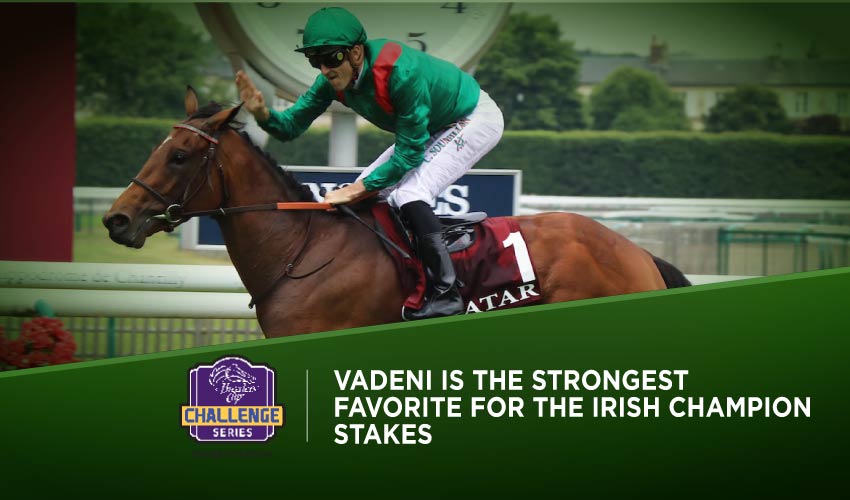 This Saturday, horse racing in both the UK and Ireland is set for an action packed day of racing.  Whilst Doncaster will host the last British Classic, the St Leger. Ireland will host one of its best days of the year – Irish Champions Day. With a fully loaded card, here we preview two of the big races of the day – the Irish Champion Stakes and Matron Stakes.

This year eleven horses will be looking to add their names to the list of prestigious winners of the Matron Stakes. The likely favourite for the race is the Dermot Weld trained Homeless Songs.

Looking to capture one of Ireland’s biggest prizes is the English raider Saffron Beach. Trained by the excellent Jane Chapple-Hyam Saffron Beach is looking to land her third win in a row. She heads to Leopardstown fresh off the back of a victory in the Grade 1 Prix Rothschild and a repeat of that performance will certainly see her in the final shakeup.

Leading Irish trainer Aidan O’Brien hasn’t won this race since 2017 and will be wanting to set that record right with Tenebrism. In her last race she was no match for Saffron Beach who beat her convincingly in the Prix Rothschild. Despite her defeat last time out, she is a multiple Grade 1 winner and at a large price has to be considered as one of the value bets of the race.

Outside of the top three in the betting, the rest of the field are all largely priced. One horse at a price that could be worth backing is the Joseph O’Brien trained Agartha. Highly raced this season, Agartha has hit the crossbar numerous times in Group races this season but finally got her head in front when she won the Fairy Bridge Stakes in convincing fashion. This represents a huge step up in class, but she is in good form and could cause a shock at a huge price.

Saffron Beach is one of the best fillies in training and looks set to land another Group 1 contest here. This race looks to be a contest between Homeless Songs and Saffron Beach and we will just back Saffron Beach to come out on top.

The Irish Champion Stakes has been in existence since 1976 and is a race that has been won by the great and the good of Irish racing. Seven horses will be looking to add their names into the history books and the runners all represent some of Ireland’s and Europe’s biggest yards.

The likely favourite for the race looks to be the French trained Vadeni. Trained by J-C Rouget, his charge has won five of his seven career starts which includes two successive Group 1 races. Despite being based in France, Vadeni is no stranger to victory on British and Irish shores.  A winner last time out at Sandown, he was a narrow victor of the Coral Eclipse. The manner of his victory that day was very tight, and despite winning some shrewd pundits believe he might be vulnerable here.

Vadeni narrowly beat Mishriff in the Coral Eclipse and the connections of Mishriff will be hoping they can exact revenge here. Mishriff has been busier than Vadeni and might arrive at Leopardstown with a fitness edge. A classy performer on his day, his connections will be hoping he can rediscover some of his previous Group 1 form.

Aidan O’Brien has won the last three renewals of this race and in Luxembourg he will be hoping to win this race for the fourth time in succession. In Luxembourg, O’Brien’s charge has won four of his five career starts which includes wins at Group 1 and Group 2 level. There are some question marks to his current form as although he won the Group 3 Royal Whip Stakes, his win that day was very narrow and he didn’t show a great deal, he will have to run far better here.

Onesto is another horse trained in France by trainer Fabrice Chappet. He will arrive at Leopardstown as the lesser known French raider but should be respected. He heads here after winning the Grand Prix de Paris which is a very respectable Group 1 contest. He may have something to find on his rivals but could be the value bet of the race.

Alenquer has won races at the very highest level in the past and will arrive at this race at a very big price. A game winner of the Tattersalls Gold Cup, that represents decent form. However he can be inconsistent and any backers of Alenquer won’t know what horse will show up.

Aidan O’Brien fills the final two spots in the race but both will be regarded as outsiders. Both Stone Age and Broome have struggled in recent starts and if either were to win, it would be considered a huge shock.

In what is a tricky race to call, this looks like it will be a close race between the top three in the market. Vadeni has the recent edge over Mishriff and we think he can reaffirm that form once again.