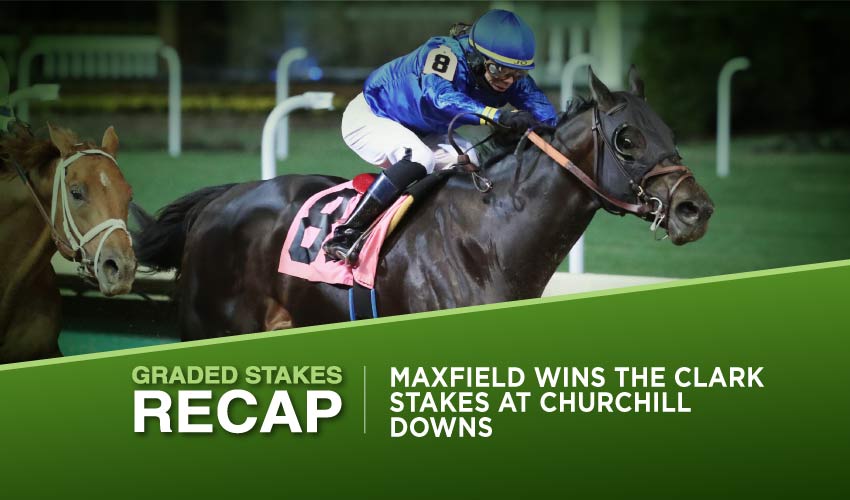 The winner of a Grade 1 normally takes top billing, but Friday’s Clark winner Maxfield had to share the limelight at Churchill Downs with the filly Envoutante, who the previous day had carried off the Grade 2 Falls City for the second year running when winning by six lengths, exactly the same as her winning margin of 12 months earlier.

Maxfield finally got the senior Grade 1 that his talent deserved when running out a game winner of the Clark at Churchill Downs on Friday, in the colt’s last appearance before being retired to stud.

Before the race the big question was whether Maxfield had the class to catch and pass confirmed front-runner Midnight Bourbon, but the 6-5 joint-favourites were almost in lockstep throughout as Maxfield never gave his rival a moment’s peace, sitting at his girth all the way round and kicking on under Jose Ortiz at the top of the stretch.

Midnight Bourbon didn’t throw in the towel but Maxfield had his measure by mid-stretch, and there was enough in the tank to see off the late challenge of Happy Saver, who got within half a length at the wire. There were three lengths back to Midnight Bourbon in third; Maxfield covered the nine furlongs in a tick over 1:49.

“I’m just delighted he went out on a winning note,” said trainer Brendan Walsh. “He’s been an unbelievable horse. And, you know, he’s helped me get out of bed in the mornings over the last two years, and it’ll be hard to find another one like him.”

Maxfield’s career was characterised by bad luck – he missed the 2019 Breeders’ Cup Juvenile and the 2020 Kentucky Derby through injury – and by his affinity for Churchill Downs, where he was unbeaten in five starts, four of them Graded stakes. The son of Street Sense retires with an eight-for-11 record, never missing the board, and will stand next year at Jonabell Farm in Kentucky.

It was deja vu all over again in the Falls City at Churchill Downs on Thanksgiving Thursday, as Envoutante repeated her win of 12 months earlier in eerily identical fashion.

“She had a date with Gun Runner if things didn’t go well today, but she showed that she’s still got it in her,” said trainer Kenny McPeek. “It’s a great day and she’s a great filly.” This was Envoutante’s first Graded win since last year’s Falls City, and the four-year-old Uncle Mo filly is now four-for-seven under the twin spires. Perhaps she and Bonny South will both be back next year to see if lightning can strike three times

Follow us on Social Media for instant Maxfield updates!