Messier Gets a Record-Setting Victory in Robert Lewis 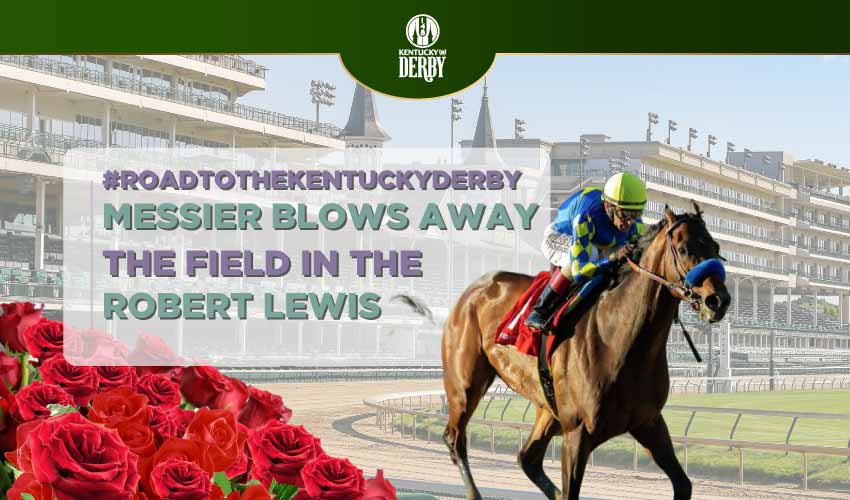 The Santa Anita Park enjoyed a weekend of exciting action as they held five Graded races in two days. As usual, trainer Bob Baffert collected some of the high prices, winning both events for three-year-old horses thanks to Adare Manor in las Virgenes and Messier in Robert Lewis, both delivering outstanding performances here as their rivals never were a threat to them.

Moreover, the Bob Baffert bound Merneith repeated her success in the G2 Santa Monica Stakes. Count Again then won the G3 Thunder Road Stakes, and Express Train was simply perfect when striking the G2 San Pasqual Stakes for the second time in a row.

The first of the Graded races were open to four-year-old and older horses who clashed in this G3 event at the distance of a mile. The purse of $100,000 attracted six contestants, while Subconscious (3-5) was the leading chance here; however, he didn’t manage to draw on his previous success and had to settle for a second place.

On the turf surface, he spent the race galloping in the second position from where he charged for the lead in the final stretch. He seemed a bit erratic but primed to get the job done; however, Count Again (14-5) flew home with such a speed nobody could oppose.

The Philip D’Amato trained seven-year-old won the G2 Seabiscuit Handicap 2020 and collected some good places in Graded races but hasn’t hit the track since August; still, his victory wasn’t that surprising. Under Flavien Prat, he closed on the leading pair in time to triumph in 1m 34.12s, bettering Subconscious by a half of a length. Ready Soul (15-2) ran in third.

The G2 dirt race was open to four-year-old fillies and older mares, among which five-year-old Merneith (14-5) attempted to become a back-to-back winner of this seven furlong-long feat. On her journey for most of the purse of $200,000, Bob Baffert’s Merneith used her early speed to settle at the front, where she remained until the very end. Under Edwin Maldonado, she just built her form on the second place in a Listed she took in January when returning from a hiatus, and she didn’t give a chance to her rivals on Saturday.

Although preferred Ce Ce (1-2) launched her attack in the final stretch, Merneith was just too good this time, drew clear from her, and recorded her second G2 triumph in 1m 22.39s. Always brave, Ce Ce ran in second, three lengths behind the winner, with Kalypso (47-10) being unable to threaten the mentioned duo as she occupied only third place in the closing stages.

The field of six four-year-old and older horses met up on the dirt surface in this G2 event, where they competed for the purse of $200,000 at the distance of a mile and a furlong. Although interesting contestants gathered here, the favourite was clear – five-year-old Express Train (8-5) who looked a winner every single yard of the San Pasqual Stakes.

Trying to win the race for the second time, Express Train had a fine start under Victor Espinoza and even seemed ready to show the way. Subsequently, he settled in second place behind Eight Rings (11-5), who he easily passed by in the final turn. The John Shirreffs bound horse has been showing high class among the elite, while on Saturday, Express Train simply looked eager to get the job done, to win easily by three and ¼ of a length, and confirm he was the best horse in the field right now.

Crossing the wire in 1m 50.99s, the big bay smoothly ran away from second Law Professor (4-1), while Eight Rings weakened in the final stretch to take third place. His stablemate Spielberg (9-2) couldn’t get past fourth.

According to Bob Baffert’s stellar results at the Santa Anita Park, it’s no wonder his favourites struck gold not only in the Santa Monica Stakes thanks to Merneith, but he also won Sunday’s races for three-year-olds, including this G3 dirt race held at the distance of a mile. The purse of $200,000 attracted five fillies at first; however, experienced Eda scratched, so her stablemate Adare Manor (2-5) started off as a hot favourite.

The daughter of Uncle Mo never gave anybody a chance to doubt her ability as she galloped second at first, but once John Velazquez urged her forward, the giant filly bolted up. In the final stretch, the closer she was to the wire, the larger the gap between her and her rival was, extending to 13 lengths when Adare Manor recorded her second victory. Up to this point, she scored only in a maiden but even back then, she oozed class as she did on Sunday when crossing the wire in 1m 37.11s. Queen of Thorns (5-2) secured second place before third Miss Everything (152-10).

It didn’t entirely look like it, but in the end, this G3 dirt race with the purse of $200,000 evolved into a one-horse-show. The Bob Baffert bound Messier (3-5) lead the field since the beginning and covered the whole distance of a mile and a half of a furlong like that; however, at first duo Sir London (18-5) – Cabo Spirit (182-10) pursued him closely.

Still, as soon as John Velazquez moved aboard the giant colt, Messier shook off the competition, scooted clear of them, and worked on creating an abysmal gap between him and the rest of the field. Highly promising colt scored the race in 1m 42.89s by 15 lengths after he finished second in the G2 Los Alamitos Stakes, but it’s fair to say he looked pretty better on Sunday than back then.

By winning his second G3 race, Messier would’ve earned 10 points for the Road to the Kentucky Derby, but as Bob Baffert’s horses are banned from Churchill Downs, they aren’t worth much for him now. Cabo Spirit easily held on to second place as winner’s stablemate, Wharton (22-5), stayed far away from the front and when launching his finish, it was just impossible for him to snatch a better place than third.

Follow us on Social Media for instant Robert Lewis updates!