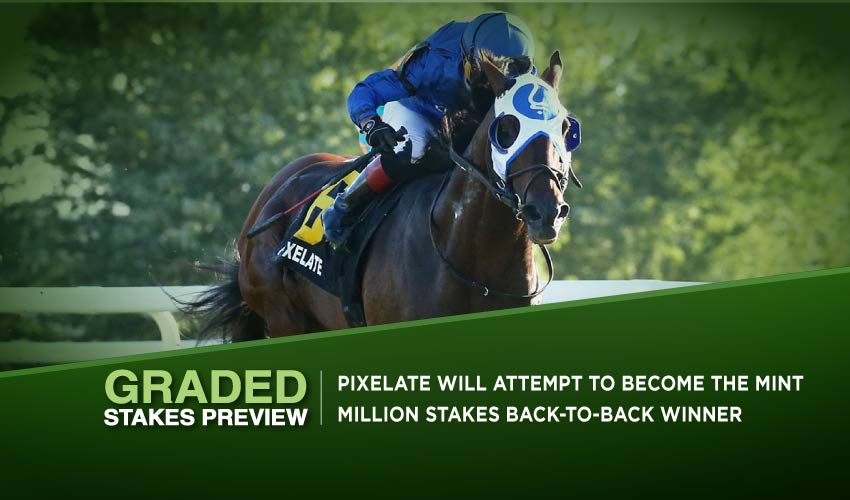 Three appealing races are to be held at the Kentucky Downs on Saturday. Two Listed events are open only to two-year-olds as fillies head into the Juvenile Fillies Stakes and colts and gelding into the Kentucky Downs Juvenile Miles Stakes. The real pinnacle of the card is the G3 Mint Million Stakes, where Pixelate will attempt to become the back-to-back winner of the treasured feat.

Three-year-olds and older horses line up for this G3 turf race, boasting the purse of $1,000,000. The field will cover the distance of a mile, with Pixelate being the leading victory candidate. The five-year-old bay bagged his very first Graded victory in 2020 in the G2 Del Mar Derby, and even though he then scored a Listed race, he had to wait for another Graded glory until the last year’s Mint Million Stakes.

In 2021, the Michael Stidham bound horse travelled at the rear of the field, but he improved his position in time, and in the final stretch, he bolted up towards an easy win. His following attempt at the G1 scene failed, and he signed off the season with second place in a black-type and Listed race. In 2022, Pixelate has been seen just once when commencing the season with a third place a Listed in August.

Of course, it was no stellar performance, but he needs to be considered on Saturday, especially when carrying less than some of his rivals together with Atone , the second chance of the race. The Michael Maker trained gelding spent most of his career in Allowance races; however, his second place in the last year’s G2 Fort Lauderdale Stakes was promising.

He met some decent opponents back then, and therefore, finishing fourth in the G1 Pegasus World Cup Turf wasn’t surprising. He delivered an effort expected of him, and the five-year-old continues in that stride until today. After placing twice at the Graded stage, he, indeed, failed to win even an Allowance, but he was defeated only by two noses at the occasion.

The following trio of participants will carry considerably more than the mentioned duo. Let’s start with Kentucky Ghost, a five-year-old gelding who scored a Listed in May. He hasn’t succeeded when tempting the Graded glory yet, but he’s a place candidate here.

Cavalry Charge is a reliable G3 gelding, but as he showed in 2022, he is capable of earning some money also among the elite. Under a lighter weight, he might be preferred in this event. Mr Dumas is also considered as his form is quite good in the ongoing season, but it’s a question whether his pleasing results at the Listed and black-type levels will be enough to bag another Graded win. It could be.

Atone, whose efforts have been consistent, and he looks ready to finally bag a big one.

The purse of $500,000 lured in a field of nine two-year-old fillies covering a mile distance. On the turf surface, Knockyoursocksoff is the leading chance of the Listed event after she triumphed in her only start in August.

The daughter of Kitten’s Joy hit the track in Colonial Downs as the favorite, galloped in the sixth, and delivered an eye-catching finish to score the mile-long race by more than three lengths. The Chris Block trained chestnut definitely suggested some raw talent back then and is preferred over some more experienced rivals, including Janis Joplin.

The Mark Casse bound bay has twice competed among Graded company as she placed both in the Schuylerville Stakes and Adirondack Stakes, yet she’s still a maiden. Besides this daughter of California Chrome, C C Cruise Control also has three starts under her belt. Kenneth McPeek has sent her to sixth place in her premiere outings, then C C Cruise Control easily bagged a maiden, upon which the Cross Traffic daughter didn’t shine in a black-type company. She finished only ninth.

The Michael Maker trained Towhead has been out three times without achieving a win, yet she placed in all three starts among maidens. The last to mention is Chop Chop. Chad Brown relies on this City of Light offspring, who recorded her first triumph in her debut in August.

Back then, Chop Chop was quick out of the gate, settled in third, and then drew clear from her opponents to strike gold. Together with the other fillies above, the distance should suit her.

Knockyoursocksoff due to her promising debut. Chop Chop looks like the second best.

Nine two-year-old colts and geldings will vie for the purse of $500,000 in this mile-long Listed race. On the turf surface, Really Good seizes the role of a favourite after having just one start under his belt. The Michael Maker bound colt broke his maiden in July when galloping in fifth or fourth place, upon which he showed a good turn of foot, thanks to which he delivered by one and half a length.

The race was held over the distance of a mile and half a furlong, so a mile shouldn’t be a problem for the son of Hard Spun. Bramble Blaze, scratched from Saratoga, has also been out only once when bagging his debut in August, while the rest of the quite interesting runners have more experience.

For example, there is Castleknock, trained by Peter Miller, who has hit the track thrice. The Bernardini offspring started off in a black-type where he was sixth, subsequently finished fourth in a maiden, and last time out, Castleknock prevailed in a maiden by three and ¼ of a length. It was a pretty commanding performance over the mile-long trip, as he scored from the front without giving his rivals a chance to better him.

The distance shouldn’t be a bother also for Mayfield Strong, a winner of his second outing. In July, he delivered a fine finish to score a maiden, and as the races for two-year-olds are often a lottery, we also mention Bourbon Therapy. Another Michael Maker trainee in the race bagged his premiere victory in June at his third attempt, running over five furlongs back then.

Castleknock, who is more experienced, but Really Good should also be very good here.