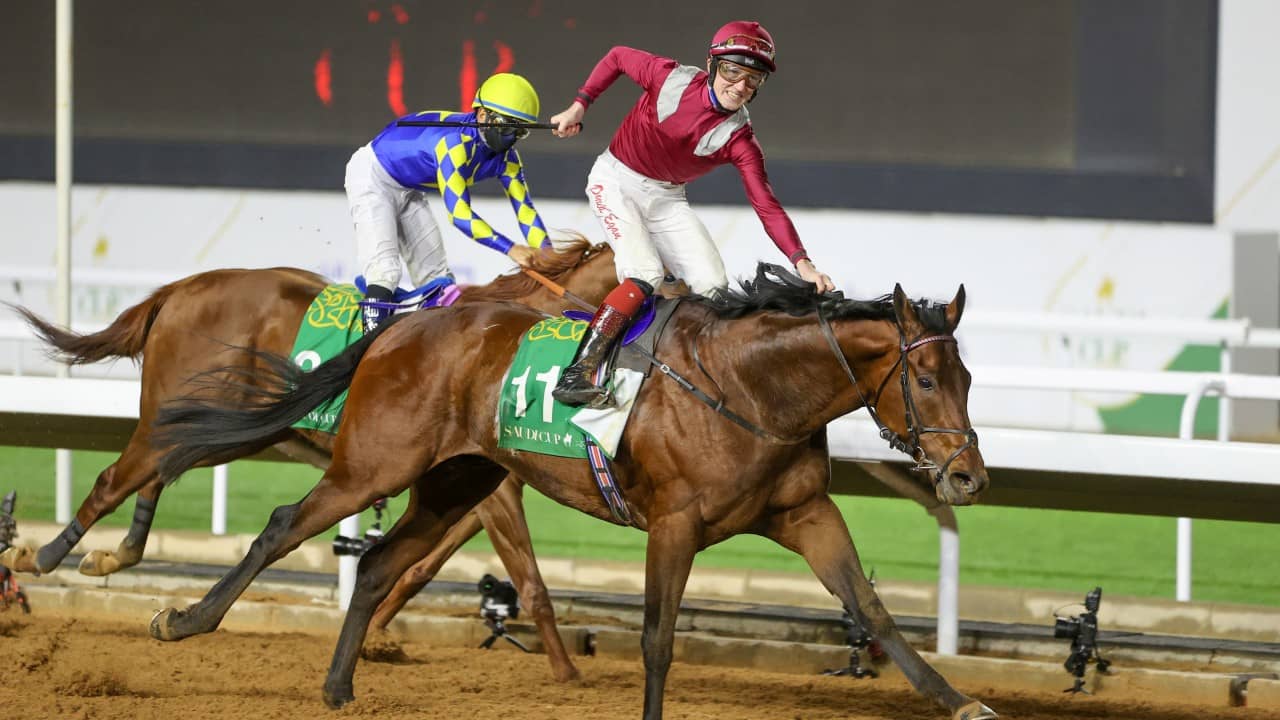 The second edition of the world’s richest horse race, the $20 million Saudi Cup; at King Abdulaziz Racetrack, took place on Saturday. The event witnessed a major upset of the two favorites by Prince A.A. Faisal’s Mishriff.

The favorite coming into the race was Charlatan at +175. The 4-year-old Speightstown colt is trained by Hall of Famer Bob Baffert; and the Malibu (G1) winner was making his first start of the 2021 season.

The other big-name receiving most of the attention was the Brad Cox-trained Knicks Go. The 5-year-old son of Paynter, owned by Korea Racing Authority, was the winner of the Pegasus World Cup (G1). He came into the Saudi Cub at +250.

The big shots failed to make it happen on Saturday; as Mishriff was the one to shock the field and run down the leaders to win the big event. An Irish-bred 4-year-old colt by Make Believe, he is trained by John Gosden.

The winner of the French Derby (G1); ran down Charlatan deep in the stretch to take the victory by one length. He was joined by jockey David Egan.

Running Down the Favorites

As the field of 14 broke; Charlatan sped out of the nine post to move ahead of Knicks Go from the five post. Mishriff sat behind the two favorites; as they made their way down the backstretch, followed by Bill Mott’s Tacitus on the inside.

Knicks Go moved out front; by a head into the turn, but Charlatan didn’t let up and took the lead once again around the turn. Knicks Go began to fall back at the top of the stretch while Mishriff moved to the outside of Charlatan.

It was then a race between the two as Mishriff targeted the leader. He ran down Charlatan as the favorite tired, eventually taking a slight lead with 100 meters to go. He slowly increased that lead until the colt crossed the line first.

Mishriff’s 2021 performance during the Saudi Cup racecard was a major step up from last year’s. The runner’s only previous dirt race came in his second-place finish in the 2020 Saudi Derby. This year’s Saudi Cup was his fifth victory in nine lifetime starts.

In the 2020 Saudi Derby, the Japanese-trained Full Flat beat Mishriff by 2 1/4 lengths. He was coming into that event following a 10-length maiden victory as a 2-year-old during his previous campaign.

Following his runner-up effort in the Saudi Derby; Mishriff went on to score a Newmarket stake in June; followed by a 1 3/4-length victory in the Prix du Jockey Club (G1); at Chantilly in France. He also scored a G2 stakes win at Deauville and finished eighth in the Champion Stakes (G1) at Ascot on Oct. 17, which was his most-recent race going into the Saudi Cup.

The other top spots in the 2021 Saudi Derby were taken by Great Scot in third, Knicks Go in fourth, and Sleepy Eyes Todd in fifth.