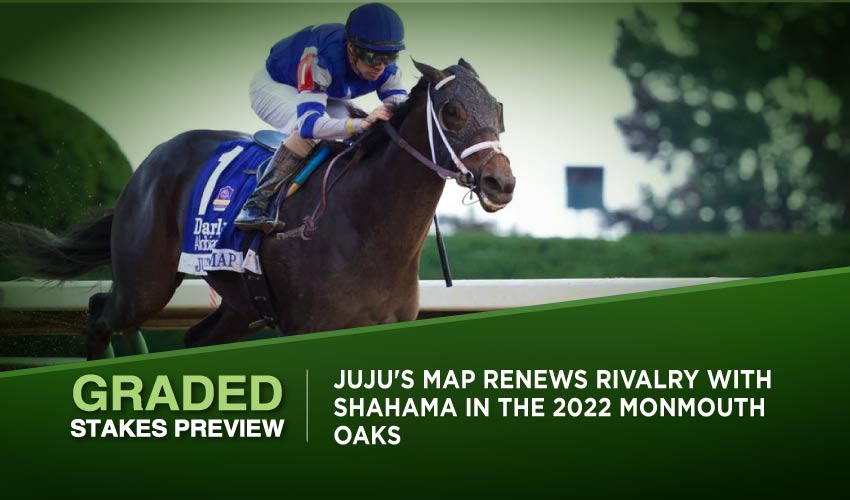 Sunday’s meeting in the Monmouth Park features the G3 2022 Monmouth Oaks for three-year-old fillies, including a G1 winner Juju’s Map. She finished second in the last year’s Breeders’ Cup Juvenile Fillies, yet failed to deliver in a G2 company last time out, so a drop in the class might should her. Shamana, the Dubai Oaks victress, could be her most serious rival.

The G3 dirt race offers the purse of $250,000 and lured in a field of six three-year-old fillies. They will cover the distance of a mile and half a furlong, while just two fillies would really surprise us if winning here.

The leading chance is Juju’s Map, however, most of her opponents have suggested to be classy as well, moreover, her last performance was disappointing. In the G2 Mother Goose Stakes, she started off behind leading Gerrymander but then took command and weakened upon turning into the final stretch.

Subsequently, she finished third out of four contestants, getting easily bettered also by Shamana. The Todd Pletcher bound bay ran a great race last time out in the G2 Mother Goose Stakes when she was defeated only by mentioned Gerrymander. She tried to put up a fight with her, though, she would’ve needed more peaceful trip to actually threaten. If she gets some rest throughout the Monmouth Oaks, she will be a tough nut to crack.

Shotgun Hottie is another to consider as the William Morey bound filly bumped into a promising rival last time out and was denied the victory only by a head. The daughter of Gun Runner was aimed into the G3 Delaware Oaks after finishing third at the same stage in the Gazelle Stakes and having a black-type win under her belt.

At the beginning of July, Shotgun Hottie had mostly a fine galop, upon which she lost the fight for the victory, indeed, still, she put on a gutsy performance and on Sunday, she could achieve her premiere Graded success. There are two other fillies in the field who participated in an Oaks race, in other words, Runaway Wife and Silverleaf earned some money in the G3 Indiana Oaks.

Back then, Runaway Wife delivered a good finish, and even though she was no match for the favorite, she left the rest of her opponents behind with ease, including Silverleaf. Therefore, Runaway Wife, a maiden winner, could continue her progress here.

The last to mention is a maiden, Office Etiquette, an utter outsider of the event.

Juju’s Map as she scored a G1 in 2021, and if she breaks well and gets into a fine rhythm, she could make amends for her recent flop. Runaway Wife could deny her odds and snatch up a place.

Follow us on Social Media for more 2022 Monmouth Oaks updates!