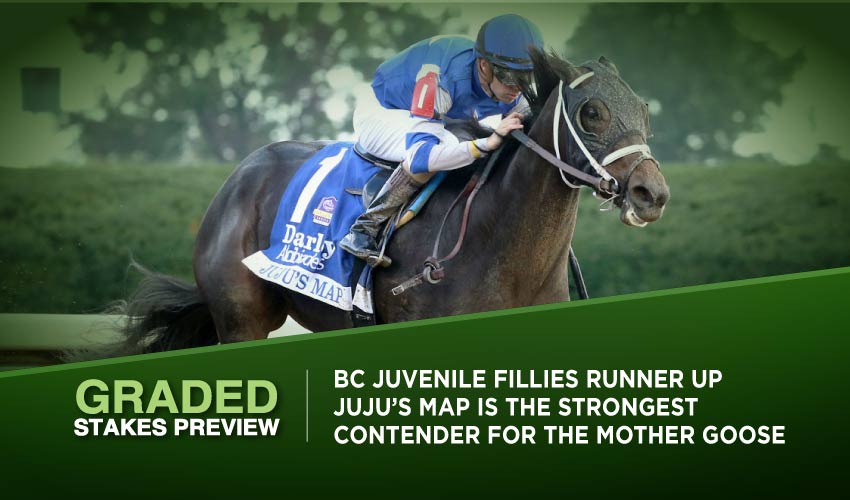 Saturday’s card at Belmont Park is led by the G2 Mother Goose, the big race of the weekend on a quiet schedule across the country. Todd Pletcher has won it six times and relies on Kentucky Oaks sixth Shahama, who renews rivalry from Churchill Downs with Venti Valentine and also meets Breeders Cup Juvenile Fillies runner up Juju’s Map, who wasn’t ready to take her chance in the Oaks but is now making up for lost time.

Two fillies bidding to bounce back to winning form and one looking to build on a recent victory comprise the main contenders for the Mother Goose at Belmont Park on Saturday, a race won a joint-record six times – including last year – by Todd Pletcher.

This time Pletcher is represented by Shahama who compiled an unbeaten streak of four in Dubai – notably the G3 UAE Oaks – before coming Stateside, where she made her debut in the G1 Kentucky Oaks and was not disgraced in defeat behind high-class fillies. She ran sixth, five and a half lengths behind Secret Oath, and was doing her best work late without ever mounting a challenge.

Already a winner over a mile and three-sixteenths, Shahama should cope with the cutback but her lack of early speed may count against her in this short field.

At Churchill Downs she was well ahead of Venti Valentine, a possible speed influence who pressed the pace before being checked and eased on the final turn, finishing a long way last. She is much better than that might indicate, finishing a game runner-up in the G3 Gazelle at Aqueduct over a mile-eighth on her previous start, and the slight reduction in yardage here will suit her.

She is expected to play a pressing game again behind Juju’s Map, runner-up in the G1 Breeders’ Cup Juvenile Fillies but absent from the Oaks. She instead came back on the Churchill Downs undercard after a six-month layoff to post an impressive success in an allowance optional claimer, in which she went gate-to-wire to win with more up her sleeve than the official margin of four and three-quarter lengths suggests.

A G1 winner in the Alcibiades at Keeneland last fall, Juju’s Map has a class edge here and will be ready to give her best with that comeback run under her belt.

More top-level two-year-old form comes from Gerrymander, although she was admittedly a long way behind Echo Zulu when runner-up in the Frizette here in October. She too was coming off a six-month layoff when making no impact whatsoever in the G2 Eight Belles over seven furlongs at Churchill Downs, and although that will have sharpened her up she needs to find plenty more.

The field is completed by Midnight Stroll, a stakes winner over seven furlongs at Tampa Bay Downs in March but rolled flat in the G2 Black-Eyed Susan at Pimlico on her Graded-race debut, finishing ninth. She figures to be another pace angle but may lack the class to make it stick.

G1 winner JUJU’S MAP, who may well get her own way on the lead, was a dominant winner on her comeback run and is now ready to move back up in class.

Follow us on Social Media for Mother Goose updates!