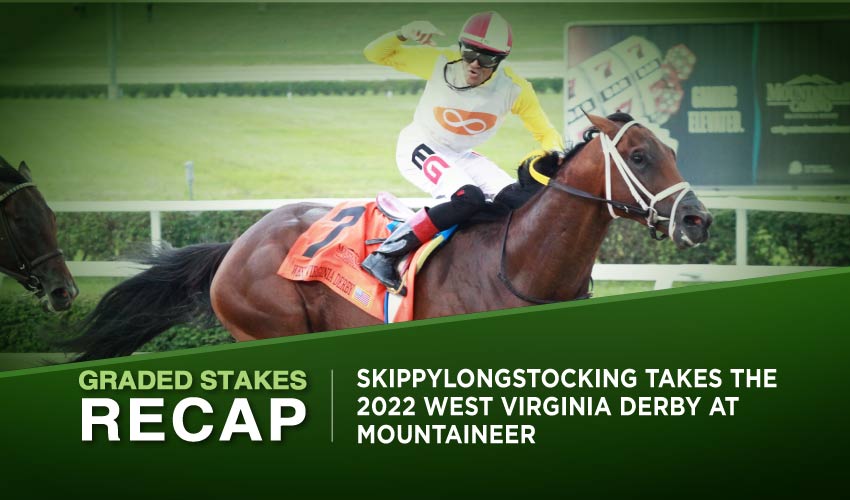 On Saturday, the Mountaineer Casino Racetrack held its rem of the season – the G3 West Virginia Derby lured in a stellar field as the impressive We The People gained the role of a favorite before Kentucky Derby fourth Simplification. In the end, Skippywhitestocking caught them off guard by scoring the race easily. Fulsome then prevailed in the G3 West Virginia Governor’s Stakes. Here is our Mountaineer Stakes Weekend Recap.

The G3 dirt event welcomed a field of eight three-year-old and older horses who covered the distance of a mile and half a furlong. Fulsome (7-10) vied for the purse of $200,000 from the position of a favorite, yet under Paco Lopez, he faced a tough challenge here in Derby House (42-10).

He galloped in the midpack but to have enough space to rally in the final stretch; the Brad Cox bound bay had to run the last turn very wide; still, he had enough energy to fight Derby House subsequently and to score the race in 1m 43.48s. In the end, Fulsome drew clear from him and left him behind by one and ¼ lengths, with Silver Prospector (43-10) taking third place.

Four-year-old Fulsome bagged his first G3 victory in May 2019 and has added three victories at the same stage since. The consistent and still quite progressive gelding could try to succeed even among better horses despite the fact his recent G2 attempt didn’t go that well.

Still, the son of Into Mischief looks ready to step up his game as bettering Derby House deserves some respect. The Juan Carlos Guerrero bound colt entered the West Virginia Governor’s Stakes with five consecutive wins in smaller races, but on Saturday, he proved to be smart enough to shine also at the Graded stage. He shouldn’t be underestimated in his next outings, while the third Silver Prospector delivered his standard.

The purse of $500,000 attracted a field of six three-year-colts, including three who ran in any of the Triple Crown races. In this G3 dirt event, Skippywhitestocking (39-10) was the least anticipated of the trio here to cover the distance of a mile and a furlong victoriously; however, he did so under Edwin Gonzales.

On the sloppy track, the bay galloped in second behind We The People (9-5), who failed to keep the lead in the final stretch as Skippywhitestocking took command. The Saffie Joseph bound colt then scooted clear from the favorite to record his premiere Graded win in 1m 48.11s, crossing the wire with the advantage of one and ½ of a length over We The People. Simplification (23-10) rallied wide to finish third.

Skippywhitestocking entered the West Virginia Derby only as an Allowance winner who placed third in the Belmont Stakes. It was assumed that We The People failed to impress back then only because he didn’t handle the distance, but on Saturday, the trip shouldn’t have been a problem; still, he once again got bettered by Skippywhitestocking, who enjoyed a peaceful race in second.

We The People weakened in the final stretch and had to settle for second, while he might simply dislike the sloppy surface.

Follow us on Social Media for more Mountaineer Stakes updates!