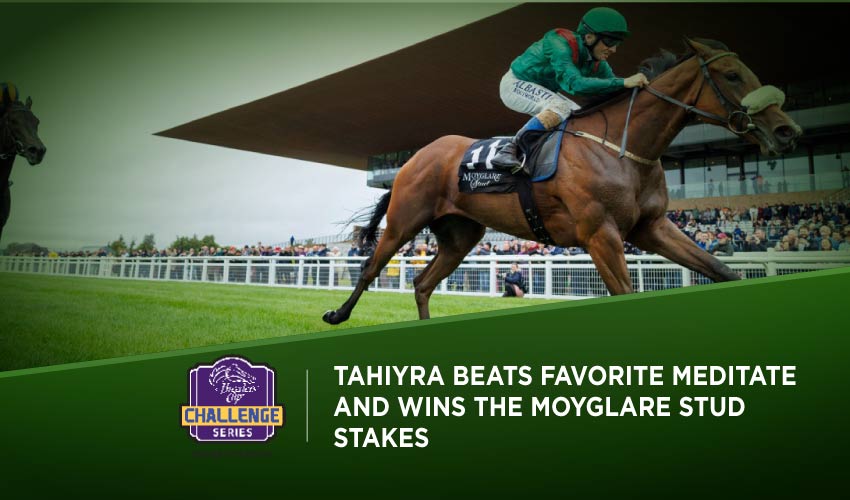 Irish Champions Weekend concluded at the Curragh on Sunday with fireworks aplenty, notably the victory of champion stayer Kyprios in the G1 Irish St Leger. The magnificent Highfield Princess added to her G1 haul in the Flying Five, while two-year-olds Tahiyra at G1 Moyglare Stud and Al Riffa (G1 Vincent O’Brien National) stamped themselves as potential stars of the future with decisive wins.

Confirmation, if any were needed, that Kyprios is Europe’s champion stayer came with this no-nonsense victory in the Irish St Leger, his third successive G1 score.

The Galileo colt – trained by Aidan O’Brien and ridden by Ryan Moore – only ever does just enough in his races, and although the 8-11 favorite had only three-quarters of a length to spare over Hamish at the line he never looked in danger of defeat. There were seven lengths back to Search For A Song in third.

There was an upset in the Vincent O’Brien National when 9-1 chance Al Riffa finished strongly under young rider Dylan Browne McMonagle on his first start in stakes company.

Aidan O’Brien was expected to win with odds-on Aesop’s Fables but it was his son Joseph who took the spoils, with Al Riffa’s late surge taking him a length and a quarter clear of Proud And Regal, with the longshot Shartash a half-length away third.

Perhaps the most impressive performance of the day came from Tahiyra, a half-sister to the brilliant Tarnawa, who kept the family name in light with a dazzling display in the Moyglare Stud.

On just her second start, the Dermot Weld-trained Tahiyra – the 10-3 second-choice – cut down the long-time leader and hot favorite Meditate inside the final furlong and quickened thrillingly clear under Chris Hayes to win by two and a quarter lengths, with longshot Eternal Silence four and a half lengths further back in third.

The rags-to-riches fairytale of Highfield Princess continued in the Flying Five, the mare signing for her third G1 in as many starts with an authoritative victory that booked her spot in the Breeders’ Cup Turf Sprint.

The 5-4 favorite, trained by John Quinn and ridden by Jason Hart, drew off without difficulty through the final furlong to win by three and a quarter lengths from Erosandpsyche, with Flotus a half-length back in third.

The closest finish of the day came in the Blandford, when Above The Curve held off the posse by a neck to spark a double for trainer Joseph O’Brien.

Fresh from a three-month break, the 5-1 shot showed plenty of determination under Ryan Moore – also kick-starting a double – to deny Insinuendo in the last few jumps, with longshot Galleria Borghese a length and a quarter away in third.