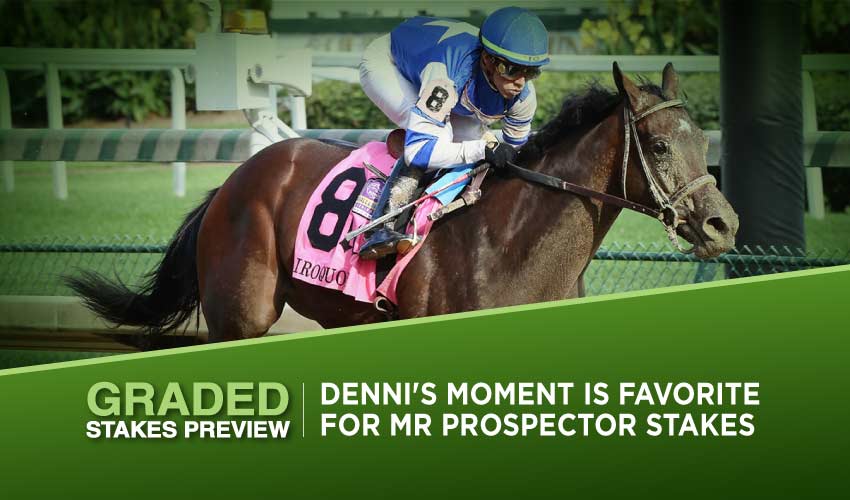 The feature event on the east coast on Saturday is the Mr Prospector at Gulfstream Park, a race that commemorates one of the sport’s greatest stallions, who once held the track record for six furlongs at the Florida venue. This year’s renewal of the race is a complicated contest headed by last-time-out winner Dennis’ Moment and a pair of strong contenders in Winds Of Change and Officiating from the Saffie Joseph barn.

Twelve months ago, the ex-Brazilian Wind Of Change ran fourth in the Mr Prospector against a much better field than he faces here. He tried to wire the field but came in three and a half lengths behind Sleepy Eyes Todd, with Firenze Fire and Mind Control in between, and a reproduction of that performance would make him the one to beat today.

However, he is only one-for-seven since then and was runner-up in handicap grade here over five and a half furlongs on his last start two months ago, although the return to seven furlongs should see him move back up and he’ll be a pace factor.

His Saffie Joseph-trained barnmate Officiating ran arguably the race of his life two starts ago, when kicking clear to win a stakes over course and distance by three and a half lengths, but was then beaten a long way into tenth in a stakes over an extended mile on the all-weather track here. Back to a more suitable surface and distance, he figures to be a player, but those last-race doubts remain.

Back in 2019, Dennis’ Moment hosed his rivals in an Ellis Park maiden by 19 lengths and then won the Grade 3 Iroquois at Churchill Downs. Then he lost his form, and didn’t get it back until last time out at Keeneland, where he came home strongly to land an allowance optional claimer by three-quarters of a length. The close-up presence of third-placed Flap Jack, who is now on a losing streak of nine stretching back almost 18 months, suggests that the value of the performance is open to debate.

A month ago Doc Amster, who makes his stakes debut today, went gate to wire in an allowance optional claimer here over six furlongs, scrambling home by a neck with Poppy’s Pride a mile back in fifth. Poppy’s Pride finished off 2020 with four straight wins, including stakes races over course and distance and at Tampa Bay, but hasn’t run near that level in three starts this year.

Then there is Endorsed, who ran fourth in the Grade 2 Phoenix at Keeneland two starts ago – with Breeders’ Cup Sprint winner Aloha West runner-up – but who hasn’t won a race of any description since May 2020, losing 14 times straight. He surely has a bit of class about him, but when will we see it again?

Betting Prediction for Mr Prospector: OFFICIATING is the selection based on his return to a more suitable test.

Follow us on Social Media for instant Mr Prospector updates!