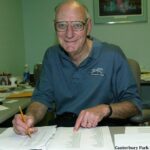 While we always like to report positive horse racing news; we do sometimes see sad stories that need to be reported. There was certainly a sad one this week with the news that legendary horse racing publicist Nat Wess; had passed away at the age of 81. Wess was a major player in the industry in the 70’s and 80’s and will be sorely missed.

Nat Wess initially went into hospital on New Year’s Eve with a fractured hip that needed surgery to repair. During his time in hospital, he eventually delivered a positive test for COVID-19. These details were all revealed in an email sent to members of the Minnesota Racing Commission.

In the early stage of his career; Wess worked as a publicist at Santa Anita before making the switch to Hollywood Park. He spent time in management positions at several different tracks across the country; including time as the assistant GM at Canterbury Park and the GM of the California Breeders Association.

However; it was his time as a promoter at Hollywood Park that really made him and put him on the map. His giveaways and the introduction of the Pick 6 made Hollywood Park the place to be; especially on the weekends, when attendance would routinely top the 50,000 mark. In the 70’s; the track would commonly draw average crowds of over 30,000; with Wess the driving force behind getting people through the gates.

Other notable events on his resume were his tireless work on promoting the Claiming Crown while in its infancy at Philadelphia Park; which is now known as Parx Racing. While with the California Thoroughbred Breeders Association; he played a major role in the creation of the California Cup; a race that just had it’s 31st annual running a couple of days after Wess passed.

Another thing that Nat Wess will certainly be remembered for

Besides his passion for the sport; was the time that he took to help people who were just at the start of their careers within the industry. With that in mind; it is no real surprise that the plaudits from people all across the nation have been pouring in since his death.

Wess is survived by his wife Ellen and his children Deborah and David. His memorial service will be for family only; a public service is planned for the summer.

Be sure to check Horse Racing Tote for all the latest horse news, Racing Odds; Races previews, Horse Racing results, as well as up to the minute reports from our experts on the Road to the Kentucky Derby.