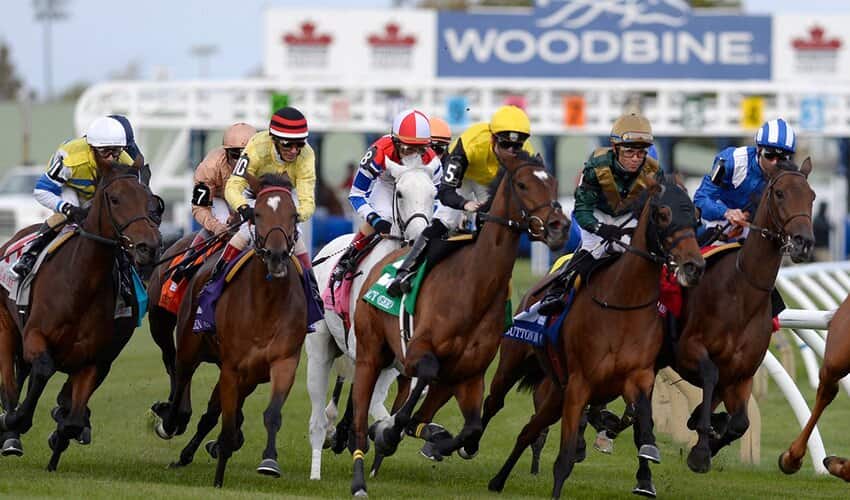 Woodbine plays host to a transatlantic two-year-old Grade 1 match-up on Sunday, with local ace Mark Casse – heavily represented in both the Natalma and the Summer Stakes, which are both win-and-in for the Breeders’ Cup – going head to head with British trainer Charlie Appleby, who flies in with two class acts, one for each race. Will the band be playing O Canada or Rule Britannia in Toronto on Sunday evening?

The duel between trainers Mark Casse and Charlie Appleby is centre stage at Woodbine on Sunday, with the Natalma Stakes, a win-and-in for the Breeders’ Cup Juvenile Fillies Turf on the opening day of world championships weekend at Del Mar, providing the backdrop for the first shots fired.

Perhaps local Hall of Famer Casse has the bullets here with the unbeaten Diabolic (3-1), who is three-for-three including two Listed races at the Toronto track, most recently when ridden out to win the Catch A Glimpse over six and a half furlongs by a length from Royal Engagement (8-1), withstablemate Mrs Barbara (15-1)– still a maiden after three starts – a length and three-quarters back in third. Diabolic, a grey daughter of leading British sire Dark Angel, seems a strong stretch runner and could take the step up to a mile in her graceful stride.

She brings peak recent form to the table, whereas British raider Wild Beauty (5-2) is on a retrieval mission for Appleby. The Frankel filly has wins in two minor races to her name but since then has come up short st stakes level, most recently when runner-up in the seven-furlong Group 3 Sweet Solera at Newmarket, which was not a particularly strong race for the standard. The mile might bring improvement, and the presence of Frankie Dettori in the saddle can only be a plus, but Wild Beauty has something to find today.

Pizza Bianca (4-1) got it right first time in a maiden at Saratoga when coming from last to first for a three-quarter-length success, and with her stamina proven over that Spa mile-and-sixteenth will be keeping on where others fade. Eminent Victor (6-1) is another once-raced maiden winner, but her cosy victory – the first two well clear of the third – came at Arlington and this represents a step up, not least in distance from that five-furlong contest. That applies to another Casse runner in Cardio Princess (20-1), narrow winner here over five furlongs on her debut.

Ready Lady (10-1) made a winning debut here over seven furlongs last month, catching Guileful (15-1) in the closing stages to score by a half-length. She is bound to come on from that, although Guileful is still a maiden and was a well-beaten fifth behind Diabolic in the first of that horse’s Listed wins.

The final Casse contender is Baksheesh (20-1), who seems neglected in the market given the evidence of her victory in a $200,000 black-type affair here over six and a half furlongs, when she drew off nicely in the straight to win by four lengths. Those looking for a longshot to hit the board could do a lot worse.

The same faces dominate the Summer Stakes, with Casse again loaded with four contenders against a lone Appleby raider, in a win-and-in for the Breeders’ Cup Juvenile Turf.

Albahr (7-5), Appleby’s shipper, is a gelded son of Dubawi, which is an unusual situation for a well-bred, evidently talented youngster. There must have been something amiss mentally or physically, but that hasn’t been borne out on the racecourse as Albahr comes here looking for a four-timer, after two wins in minor company and a battling success in a Listed event over a mile at picturesque country circuit Salisbury.

Geldings are ineligible for Group 1 races confined to two-year-olds and three-year-olds in Europe, so Albahr has to travel to take a shot, and everything about him – including his affinity for fast turf – suggests that he’ll be hard to beat.

The best of Casse’s quartet is certainly First Empire (5-2), who has already won twice at Woodbine and last time out stamped his class in the Listed Soaring Free, when driven out to score by a length and three-quarters from Degree Of Risk (8-1), with the pair well clear of the third horse. The Classic Empire colt goes beyond six and a half furlongs for the first time now, but his style of racing suggests that the extra yardage will be no problem.

Degree Of Risk reopposes today, and not only does he have ground to make up on First Empire, but this Arlington winner is in the same ownership as Albahr, and the thought occurs that if Degree Of Risk had a winning chance here, why would Godolphin ship Albahr 3,000 miles to play second fiddle? Second-strings do occasionally upset the applecart, but the designation doesn’t advertise Degree Of Risk’s chances.

Shug McGaughey bids to break the Casse-Appleby hegemony with Saratoga maiden winner Dripping Gold (9-2), who looked to have a future when keeping on strongly to win by two and a quarter lengths from Gooch Go Bragh, who then finished fourth in the Grade 3 With Anticipation back at the Spa. Dripping Gold’s stamina is not in doubt – that debut win was a mile-sixteenth – and that is a useful weapon in this field.

Casse’s other three runners inhabit longshot territory; the once-raced Grafton Street (10-1) is the most interesting of them after finishing third in a Belmont maiden taken off the turf in May. Owned by the Coolmore empire, he will surely leave that form way behind before too long. Stablemate Souper Legacy (15-1) won a seven-furlong maiden here last month, beating Ready For The Lady (20-1) by a length, while barnmate Luckman (20-1) was beaten a neck in the other division of that maiden on his only start.