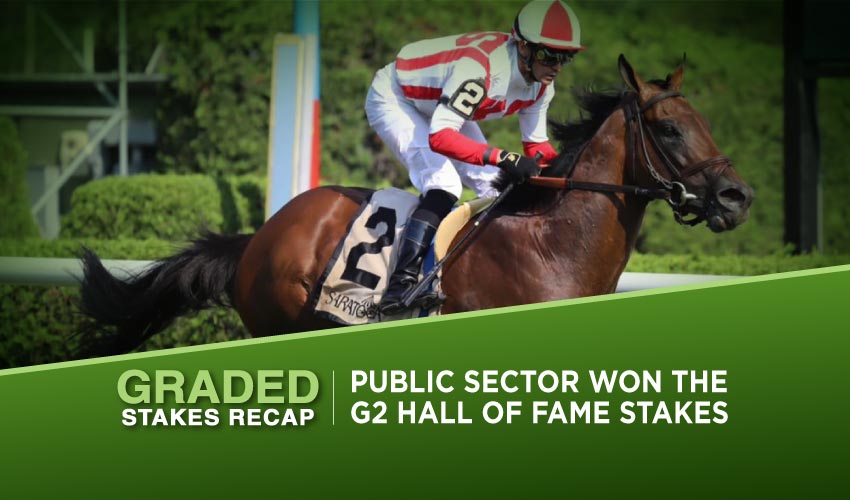 On the day trainer Chad Brown sent out his 2,000th winner, he put the cherry on the icing on the cake when winning the feature at his hometown track Saratoga, saddling Public Sector to win Friday’s $200,000 Grade 2 National Museum of Racing Hall of Fame Stakes, for three-year-olds.

Brown will end up in the Hall of Fame one day, and it was fitting that his big day should be led by success in turf stakes; his stock-in-trade. Public Sector was a warm order at the windows, paying off at $3.80, and his many supporters never had a moment’s concern, the son of brilliant British miler Kingman taking control a furlong out under Flavien Prat and keeping on gamely to beat Annex by a length, with In Effect a length and a quarterback in third. Public Sector covered the mile in 1:35.

Brown’s personal milestone was somewhat put in the shade by Steve Asmussen’s feat of drawing level with Dale Baird in the all-time US standings with his 9,445th winner, but he accepted that with a grin.

“Yeah, there’s a lot going on today, Steve Asmussen and the Hall of Fame induction. Hopefully, we get a blurb at the bottom of the report about getting 2,000,” he said. “It was a great ride by Flavien and a great performance by the horse.”

The late scratch of Casa Creed from the $200,000 Grade 3 Troy Stakes, for four-year-olds and up on turf; opened the contest up for Fast Boat (Joe Sharp/Tyler Gaffalione). He finished his race off like a veritable speedboat, closing irrepressibly to catch long-time leader Carotari in deep stretch and win by half a length. Also, with a length back to Gear Jockey in third.

Last time out Fast Boat had no more than a distant view of Casa Creed’s backside, but everything fell into place for him here. He stopped the clock for the five and a half furlongs in 1:01 and one-fifth and paid out at $23.80.

“The horse on the lead dug in again when he got to him, but when he fires his big ones, it’s always fun to watch,” said Sharp.

He will give the six-year-old one more start before taking him to the Breeders’ Cup Turf Sprint at Del Mar.

Narrow Victory of Elm Drive In The Sorrento Stakes

Talking of Del Mar, the highlight of Friday’s card at the beach was the $200,000 Grade 2 Sorrento Stakes, for two-year-old fillies over six furlongs. The race developed into a stirring stretch duel between Elm Drive and Eda, the two drawings well clear, with the former proving just a head too good for her game rival.

Elm Drive, like the runner-up having only her second lifetime start; is trained by Phil D’Amato and was ridden by Juan Hernandez. The third choice in a field of eight paid out at $6.60 and covered the distance in 1:10 and three-fifths; it was more than 13 lengths back to the favorite Smash Ticket in third. Elm Drive and Eda will likely renew rivalry in next month’s Grade 1 Del Mar Debutante.

Follow us on Social Media for instant Del Mar and Saratoga races updates!