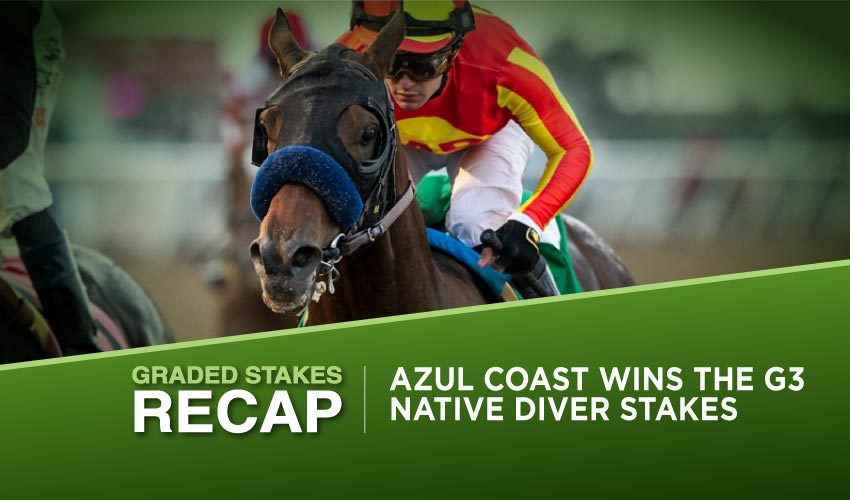 Saturday’s card at the Del Mar racecourse was headlined by the Native Diver Stakes held at the distance of a mile and a furlong where Bob Baffert’s four-year-old Azul Coast finally achieved his premiere victory at the Grade scene. Until now, the once very promising colt won only at the Listed stage but managed to break the duck this time, fending off second Kiss Today Goodbye. Here the Native Diver Stakes Recap.

After Midcourt, the winner of the G3 race from 2019, scratched from the dirt event, six three-year-old and older horses were about to cover the distance of a mile and a furlong with the purse of $100,000 up for grabs. Prior to the Native Diver Stakes, it looked like the race should be mainly about the Bob Baffert trio, which seemed to be the case when the field turned for home, and Baffert’s charges occupied the front, yet it wasn’t that simple in the end. The leader Ax Man (66-10) soon weakened, favourite Eight Rings (2-1) had also nothing left in the tank, so it was their stable-mate Azul Coast (16-5) who surged for the lead and had to hold off finishing Kiss Today Goodbye (13-2).

Piloted by Flavien Prat, Azul Coast was resting throughout the race at the rear of the field, so he finished strongly in the final stretch and managed to bag his very first Grade victory despite being once considered even a Kentucky Derby hope. The four-year-old crossed the wire in 1m 50.55s with half of a length advantage over Kiss Today Goodbye, who spent the race in the midfield; moreover, both he and Azul Coast were turning quite wide both the turns. Still, they left the rest of their rivals behind, including Eight Rings, who galloped in second, but was no match for the duo in the end.

Bal Harbour (159-10) was fourth, the pace-setter, Ax Man, faltered to the fifth position.

Regarding Azul Coast, it should be once more stressed he, indeed, belonged among the promising three-year-olds in 2020 when she scored the Listed El Camino Derby and was pointed to the G1 Santa Anita Derby. Disappointing when running in seventh, he then didn’t fire in the G3 competition, and only in 2021 did he score at least in the Allowance. Still, he had no chance in the G1 Awesome Again Stakes, yet, by winning Saturday’s G3, hopefully, he might be at least a useful Grade performer, especially when running at the Del Mar racecourse Azul Coast obviously likes.

Sign up and get a 10% rebate. Make sure to stay tuned for the latest Horse Racing Odds, Kentucky Derby Future Book and racing entries