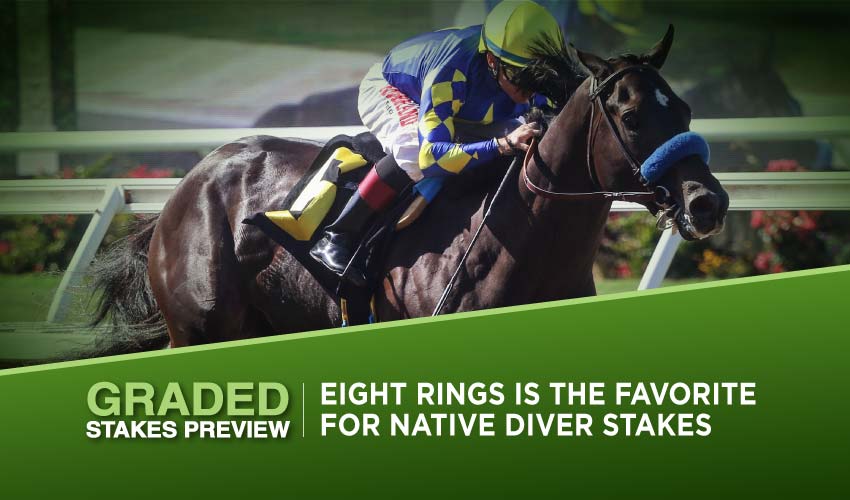 Saturday’s card at the Del Mar Racecourse offers primarily the G3 Native Diver Stakes held at the distance of a mile and a furlong where a duo of Bob Baffert colts will attempt to finally win at the Grade scene. Both Eight Rings and Azul Coast have some underwhelming results under their belts, but in this company, they should fight for the win alongside the Del Mar specialist, six-year-old Midcourt.

The G3 bottom line of Saturday’s meeting at Del Mar is open to three-year-old and older horses, and on the dirt surface, seven colts and geldings will try to snatch most of the purse of $100,000. They’re about to cover the distance of a mile and a furlong, all of them carry the same weight, and even though he’s not a favourite here, six-year-old Midcourt (5-1) deserves to be mentioned as the first one due to his victory in the Native Diver Stakes in 2019. If the John Shirreffs charge scored the race again, he’d become the only horse to it for the second time; still, it’s necessary to rationalize his chances as it’s true Midcourt has been a fantastic servant to the connection, yet he’ll meet some interesting rivals here.

He’s managed to bag also a G2 victory and place in the G1 Awesome Again Stakes last year; however, when attempting to place also in 2021; he finished only eighth. His form is, thus, a bit questionable, but he shouldn’t be dismissed given he’s showed up in the Native Diver Stakes twice and crossed the line in first and second place, respectively. He seems to thrive at Del Mar, so he looks the main threat for the Bob Baffert duo of four-year-olds.

Both are likeable but definitely not unchallengeable as Azul Coast (7-2) was only by one place better in the Awesome Again Stakes than Midcourt, and he’s still waiting for his premiere Grade success. The Super Saver colt hasn’t really fulfilled his potential, bagging only the Listed El Camino Derby in 2020, and whenever faced with more serious competition, he just falls flat.

There’s something about him that might surface some day; however, his stable-mate Eight Rings (5-2) seems more interesting for the Saturday race. Back in 2019, he won the G1 American Pharoah Stakes, yet hasn’t delivered at least a remotely exciting performance until this year’s July when he finished second in the G1 Bing Crosby Stakes. Neither of his subsequent three starts suggested he could be a star, but Eight Rings ticks each box to become a useful Grade horse, and he’s capable of winning this G3 renewal.

Ax Man (13-2), the third Bob Baffert’s chance in the race, might seize a fine place here, which also applies to Kiss Today Goodbye (11-2), trained by Eric Kruljac, who scored the G2 San Antonio Stakes in last year’s December, suggesting his best form might again come at the end of the year.

Our betting pick for the Native Diver Stakes is Eight Rings as his effort at the Breeders’ Cup was solid, and he should fire well in this competition.