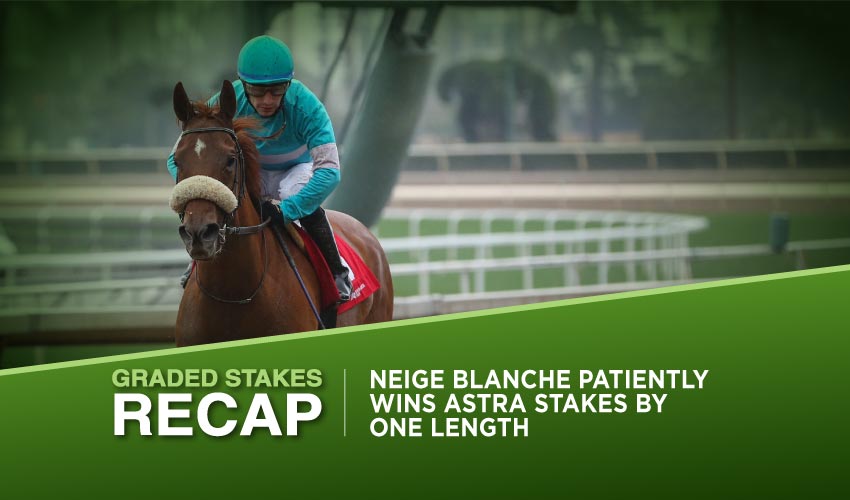 The only Graded stakes over the three-day holiday weekend in the US was the Astra at Santa Anita on Monday, won as expected by the hot favorite Neige Blanche but not without slight alarm, as the mare was caught behind horses at the top of the stretch until a gap appeared for her to make a decisive challenge.

It didn’t look as easy as her prohibitive odds suggested it would be, but in the end Neige Blanche got the job done with something to spare in the Astra at Santa Anita on Monday, setting herself up for a tilt at bigger things further down the line.

The five-year-old mare was the only runner in the field of five with a stakes win to her name, having won at Group 3 level in her native France and twice in Grade 3s after shipping Stateside, and given that the marathon turf division is never notably strong it was no surprise that those credentials led to Neige Blanche being sent away as the 1-5 favourite, despite conceding 4lb to all her rivals.

A steady early gallop was only to be expected, with the outsider of the party Frose taking things easy on the lead, with the result that when the field turned for home for the final time they were all stacked up on top of each other, with Neige Blanche momentarily locked behind a small wall of horses as the pace finally began to pick up.

Disappearing Act took the opportunity to live up to her name when scooting three lengths clear, but as soon as Neige Blanche saw daylight she accelerated in style and ran down Disappearing Act inside the last sixteenth, winning unextended by a length in a time of 2:32 and one-fifth. Scherzo came through for third place, six lengths further away.

“The trip worked out pretty good for her because she likes to run like that,” reported winning jockey Juan Hernandez. “She was happy the whole race. I was just waiting for some space to come through and make her run, because as soon as she finds spaces, you just put her in there and she comes right through like she did today.”

Neige Blanche’s record now stands at four-for-ten in the US and seven-for-16 lifetime, and she will bid to take advantage of the considerable opportunities in the distaff turf division on the west coast through the winter and spring. Trainer Leonard Powell, for whom this was an emotional afternoon following the death of his father David, a very well-regarded bloodstock agent in France, believes that Neige Blanche has the quality to pick up Grade 1 honours this year.

“My father has done a lot for racing in France, and me being here is part of him,” said Powell. “My brothers and stepbrother back in France, we all live on with all that he told us. He was a great man to all and I hope we make him proud.”

Make sure to stay tuned for the latest Horse racing odds, and racing entries. Sign up to get our daily horse content