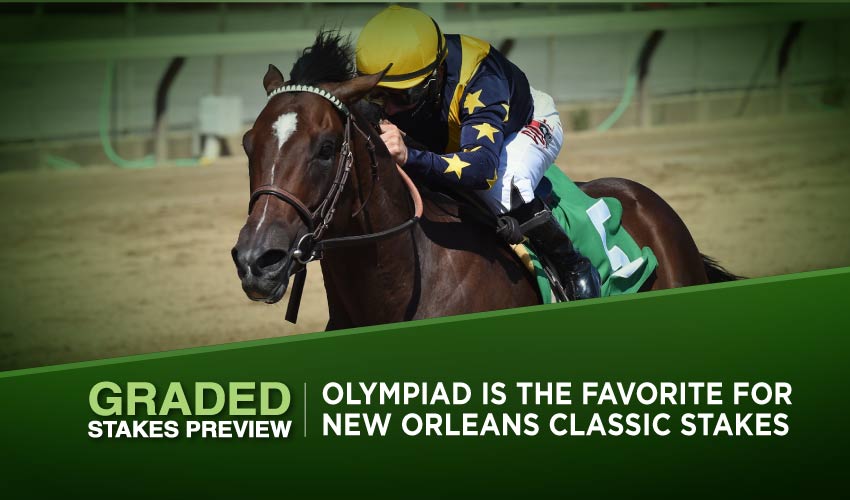 The upcoming cards at the Fair Grounds offer several Graded races; while we’ll cover two of them in this article, both are meant for four-year-old and older horses. At first, they’ll meet on the dirt surface in the G2 New Orleans Classic, won by By My Standards or Palace Malin in the past, where last year’s winner Chief Chess faces five four-year-olds, including progressive Olympiad. Subsequently, the Muniz Memorial Classic Stakes for turf specialists features especially the Chad Brown duo Sacred Life – Devamani.

This G2 race is held on the dirt surface and is open to four-year-old and older horses. The field of six contestants is about to fight for the purse of $500,000 and cover the distance of a mile and a furlong, while the field is quite competitive, given there’s no obvious outsider.

The William Mott trained Olympiad seems to be the leading chance here as the four-year-old struck gold last time out, bagging his very first Graded victory in the G3 Mineshaft Stakes. Prior to that, he finished fourth in the G1 Cigar Mile Handicap and easily scored an Allowance. Olympiad will carry the biggest weight on Saturday, but he’s a progressive specimen who should be classy enough to complete a victorious hattrick. Next to mention is four-year-old Promise Keeper from Todd Pletcher’s lot despite the fact the colt utterly failed in last year’s Tampa Bay Derby.

Still, when pointed among the lower competition, he delivered in an Allowance race at first, and then also smoothly prevailed in the G3 Peter Pan Stakes. Promise Keeper ran slightly below-par in his subsequent outings, including February’s Razorback Handicap.

However, Saturday’s company seems of a lower quality than in the mentioned G3, which is a bit curious, but that’s how it is. Another interesting four-year-old could be Michael Stidham’s Proxy, who collected some points towards the Kentucky Derby 2021 but didn’t run there in the end; moreover, he hadn’t hit the track from April until February. He returned with a fine victory in an Allowance, so he should be in form and still capable of running well among such a company. Proxy is a talented colt and probably the main rival for Olympiad.

As the field comprises five four-year-olds and just one older participant, let’s mention the remaining duo of four-year-old colts – Super Stock and Happy American. While the former is a well-known figure due to his win in the G1 Arkansas Derby, upon which he bagged only two Listed races, the latter has only one Graded experience under his belt when running in fifth in the G3 Mineshaft Stakes.

Six-year-old Chief Chess scored the race in 2021 when bettering some exciting rivals, and even though he doesn’t belong among the victory candidates, at first sight, he was in a similar position last year and still won. He just shouldn’t be discarded here.

Olympiad due to his gutsy G3 victory. We really liked the way Proxy returned to the track as his finish was quite eye-catching back then, but Olympiad is the one to beat here.

The second race we cover in this article is open to four-year-old and older horses who will meet on the turf surface while vying for the purse of $300,000. On the distance of a mile and furlong, Sacred Life is the favorite in the field of nine due to his very decent results throughout his career, comprising even several second places at the G2 scene and also a third place in the G1 Maker’s Mark Mile Stakes in 2021.

Chad Brown’s seven-year-old trainee has scored just one Graded race, the G3 Knickerbocker Stakes, in October, upon which he confirmed his form in the G2 Seabiscuit Stakes, where he took second, still, a victory was expected back then.

He didn’t impress in the G1 Pegasus World Cup Turf either, but in Saturday’s company, his class should be enough to fight for the victory at least. Regarding Chad Brown’s lot, the trainer also relies on eight-year-old veteran Devamani, who bagged the 2020 Knickerbocker Stakes, while during last year, he added a G3 victory to his record.

He didn’t hit the track since June, returned in February, and even though the sixth place in a G3 company wasn’t entirely bad for a comeback, it didn’t really hint how good Devamani could be currently. Last time out, Another Myster struck gold in the G3 John B. Connally Turf Cup Stakes, but it seems that the first-mentioned couple is in a slightly different league; moreover, he’s about to carry more weight than them due to the G3 success in January.

In February, some of Saturday’s rivals met in the G3 Fair Ground Stakes when Cavalry Charge scored the race after he had a peaceful gallop at the front. Still, he won only by a neck, while Santin was charging from the midpack.

He couldn’t get past fourth place, but the Brendan Walsh four-year-old keeps suggesting he could turn into something nice as in his four outings, he won a maiden and an Allowance, upon which he got narrowly bettered in the G1 Hollywood Derby.

He finished second, and despite the fact that he didn’t fulfill the role of a favorite in the Fair Grounds Stakes, Santin seems prime to make amends. Two Emmys were only tenth in the mentioned G3 race; however, he finished second in last year’s edition of the Muniz Memorial Classic Stakes.

Sacred Life, as we know he can handle such a competition, while in the case of Santin, it’s still a bit of a question of how good he can actually be.