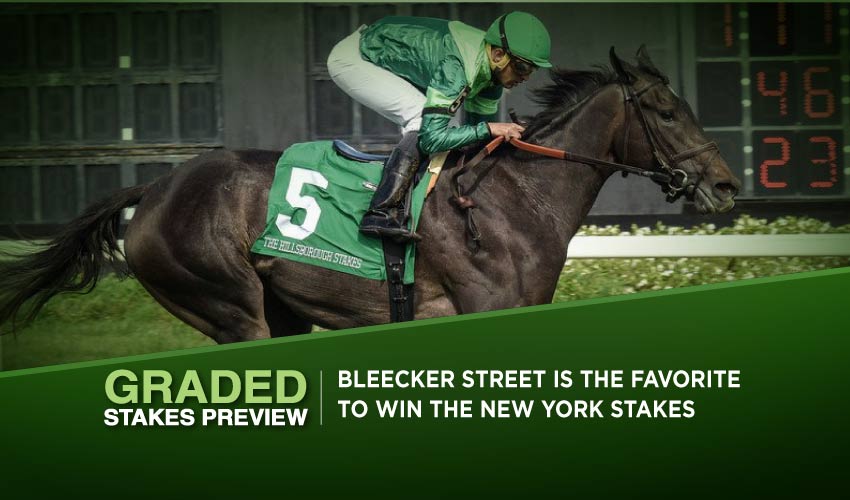 The distaff brigade is center stage at Belmont Park on Friday, with the feature G1 New York Stakes dominated by Chad Brown, who has four of the seven runners and the first three on the morning-line with Rougir, the unbeaten Bleecker Street, and Virginia Joy. Only four go for the G2 Bed O’Roses but there won’t be much between Bella Sofia and Obligatory, while there’s a big field of sprinters in the gate for the ultra-competitive G3 Intercontinental.

He has won the race three times already but Chad Brown really wants to win it again, sending four to the gate – more than half the field – for the valuable New York, the highlight of Friday afternoon at Belmont Park.

Brown has a remarkable harem of turf fillies and mares and splitting them up is hard, hence the block entry. All of them run for owner Peter Brant, giving bettors a headache as to which might be the barn’s preferred contender, and there’s no cure for that headache because three of the four have race-winning credentials.

The morning-line favorite is Rougir, a G1 winner in France last year and impressive on her debut for Brown in the G3 Beaugay here over a mile-sixteenth, drawing off to win by three. She’ll move up from that first run in six months and that Longchamp G1 score came at today’s distance.

Then there’s the unbeaten Bleecker Street, six-for-six and ready for the top level after three wins in Graded stakes, most recently the G3 Modesty at Churchill Downs over a mile-eighth, in which she came with a huge finish to score by a half-length while shaping as though she wanted to stretch out further.

Don’t forget barnmate Virginia Joy, fourth in this race last year (when it was a G2) and primed to do better now after running two-for-two in 2022, last time blitzing the field by more than 14 lengths in the G2 Sheepshead Bay here over a mile and three-eighths, with Lovely Lucky beaten more than 20 lengths into third.

Virginia Joy doesn’t have to lead, as she proved on her previous start in the G3 The Very One when she outdrew Family Way – subsequent winner of the G3 Orchid at Gulfstream Park – in the closing stages to win by a length.

The final member of the Brown quartet is Flighty Lady, zero-for-five in stakes and well beaten in an allowance optional claimer here on her first start of the year. She, at least, looks easy to pass over in this heady company, as does Core Values, third in the G3 Bewitch at Keeneland – Family Way runner-up and needing a lifetime best just to get in the mix.

Chad Brown has a lock on this race, but choosing between his big three isn’t easy. Perhaps ROUGIR, already a G1 winner, can make her proven class tell.

Disappointing in terms of quantity, the Bed O’Roses has all anyone could want quality-wise, with the four runners collectively unbeaten in their last nine races.

The most impactful performance has come from Obligatory, who made her G1 breakthrough in a very hot renewal of the Derby City Distaff at Churchill Downs when coming with a strong stretch run to get the gold medal in the last few jumps. A very progressive filly, she is unbeaten under those twin spires but proved her ability to act here when only just denied in the G1 Acorn 12 months ago.

She spots weight today, as does Bella Sofia, four-for-five at this circuit, who bounced back after a Breeders’ Cup blip when showing plenty of fight to grab the G3 Vagrancy here over six and a half, outgaming Frank’s Rockette by a nose in a thriller. Last August she was an easy winner of the G1 Test at Saratoga over today’s distance with Obligatory a well-beaten fifth, although that filly has improved markedly since.

Glass Ceiling is riding a four-race winning streak and posted a lifetime best last time out when clearing away to win the G3 Distaff at Aqueduct by five lengths, with Easy To Bless a well-beaten last of five on her Graded-stakes debut. This will be tougher but this slow-burner is moving up fast and deserves her chance.

There is plenty of strong recent form here, but OBLIGATORY beat a very deep field to win her first G1 last time and is the choice to extend her streak to four.

A big field for the Intercontinental means a hectic helter-skelter of a sprint and a very open contest, in which a clear run-through will be the most important factor.

Three of these met in the G3 Caress at Saratoga last July, in which Caravel pulled clear for a comfortable win with Robin Sparkles beaten three lengths into third and Flower Point a length and a quarter back in fifth. None of the three has really moved on from that, though, and Flower Point has been going longer with a win in Aqueduct stakes over a mile-sixteenth in November.

Wesley Ward can’t be ignored in speed tests and sends Illegal Smile in search of a hat-trick after two wins in allowance grade at Keeneland over five and a half furlongs, while Tobys Heart is zero-for-five at Graded level but is in the mix after winning stakes at Churchill Downs over five and a half last time.

Another last-time-out stakes winner is Miss J McKay, who ran a career-best over course and distance when drawing three and a quarter lengths clear of Miss Majorette, although she’s been done no favors with the outside post.

No turf race in New York can go off without a Chad Brown runner, and his Nevisian Sunrise cuts back after winning a Keeneland allowance over a mile on her first run of 2022, while Star Devine produced a strong performance on her first start in eight months when runner-up to the high-class Campanelle in stakes at Keeneland in April, with Jouster two and three-quarter lengths behind her in fifth place.

A competitive contest, but the lightly raced STAR DEVINE ran well in defeat last time and will be sharper for her second start following a long layoff.