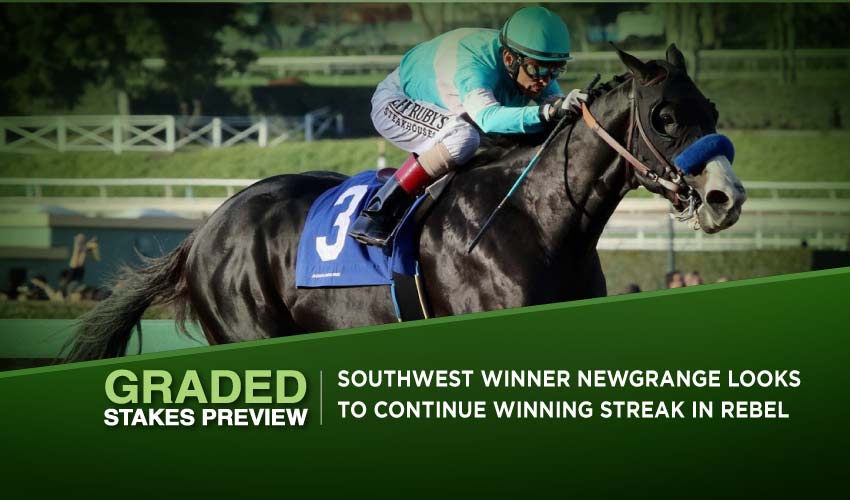 Saturday’s card at the Oaklawn Park offers a couple of Graded races, both meant for three-year-olds aiming either at the Kentucky Derby or the Kentucky Oaks.

At first, fillies will line up in the Honeybee Stakes, upon which colts will run in the 2022 Rebel Stakes, a valuable part of the Road to the Kentucky Derby. The first four finishers will earn points, and even though Newgrange would be a hot candidate to snatch up those sweet 50 points for winning the race, he’s a Bob Baffert’s charge, and Bob Baffert is banned from running a horse in the Churchill Downs.

Although the 2022 Rebel Stakes field is considerably weaker than previous editions, won, for example, by American Pharoah or Omaha Beach, it’d still be closely watched.

The prestigious trial for the Kentucky Derby 2022 is held at the distance of a mile and a half of a furlong on the dirt surface, while the purse of $1,000,000 is up for grabs.

On Saturday, eleven three-year-old colts line up at the Oaklawn Park to earn their points towards the first leg of the American Triple Crown, where Bob Baffert is banned from having a runner, though. So, his trainee Newgrange is a favorite for the Rebel Stakes, yet the colt doesn’t compete for the points, only for the purse. The son of Violence is unbeaten in three of his outings as he won his debut, then scored the G3 Sham Stakes, and the G3 Southwest Stakes in January.

The dark bay doesn’t mind running from the front or sitting close to the pace to subsequently rely on his finish in the final stretch. John Velazquez aboard applied the later tactic last time out when Newgrange bumped into several of his Saturday’s rivals, leaving the best of them, Barber Road, behind by one and a half of a length. Back then, the favorite had to cope with the outside draw, which is not the case this time, and it should go into his stride.

Because the field isn’t much stronger than in the Southwest Stakes, it’s quite logical to assume that Newgrange is about to strike again, even though he carried more weight, e.g., Barber Road.

This colt, trained by John Alexander Ortiz, looks again set to be the favourite’s main challenger as his turn-of-foot in the Southwest Stakes was eye-catching.

The son of Race Day has been a bit unlucky in all of his outings among the black-type, Listed, or Graded company because he’s always been there, running a great race, yet he always came short and had to settle for second.

Still, he’s a hard trying colt, so if he has a good trip on Saturday, he should be close to Newgrange. However, to outright say he’ll better him, that’s not something on our mind as both of the rivals are capable of putting a big fight. Ben Diesel and Kavod ran a good race in the Southwest Stakes, taking third and fourth place, respectively, yet we might prefer fifth Dash Attack to them.

The Kenneth McPeek bound bay won the Smarty Jones Stakes but got unlucky in the Southwest Stakes, which wasn’t that unexpected as he relies on his finish that isn’t always easy to unfold in a huge field of horses. He seems to be a proper colt who just needs some luck to show it on Saturday.

Regarding contestants who chose a different path to the Rebel Stakes, Un Ojo (12-1) deserves mention after finishing second in the Wither Stakes behind impressive Early Voting, while the last duo to discuss here is yet to compete in the Graded company.

Ethereal Road struggled to break his maiden, which he did at the fourth attempt in January, but his turn-of-foot proved fatal for the rest of the field as he came from last to first to better even hot favourite Quick To Blame. He seemed to love his job, overcame blunder at the starting gate, and might even play a significant role in the Rebel Stakes, which could also be applied to Chasing Time trained by Steven Asmussen.

The son of Not This Time has five starts under his belt, including a sovereign victory in an Allowance Optional Claiming where he scored by almost eight lengths. He could be an interesting rival for the more preferred horses if he overcomes the wide draw and settles near the pace.

Our betting pick for the 2022 Rebel Stakes is:

Newgrange, who well displayed his ability in the Southwest Stakes where he didn’t have a peaceful trip, still managed to prevail decisively. From the rest of the field, Barber Road should snatch a place alongside Ethereal Road whose effort last time out was just unbelievable.

The G3 dirt race used awesome Shedaresthedevil in 2020 as a stepping stone towards bigger things, while in 2022, six three-year-old fillies will attempt to emulate her victory here. At the distance of a mile and a half of a furlong, the participants compete for the purse of $300,000, while the leading chance is Wayne Lukas’ Secret Oath (3-2).

The bay absolutely demolished the Listed Martha Washington Stakes field in January. It seems she’s shaped into an outstanding specimen as her last performance wasn’t anything like her fifth place in the G2 Golden Rod Stakes in November. Back then, she was no match for both the victor and second Yuugiri (5-2), who put up a bold front-running effort.

If Secret Oath delivers a performance similar to her most recent one, she should turn the tables on Yuugiri even though her rival looks to be a fine filly, too. Optionality (7-2) easily scored the black-type Trapeze Stakes in December but had no chance against Secret Oath in January.

Still, each of the mentioned fillies seems quite classy, while Free Like A Girl (6-1) shouldn’t be discarded either because she’s bagged four black-type victories as a two-year-old, to which she added another one in February.

Our top pick for the Honeybee Stakes is: Secret Oath because her January victory was just breathtaking.

Follow us on Social Media for 2022 Rebel Stakes updates!