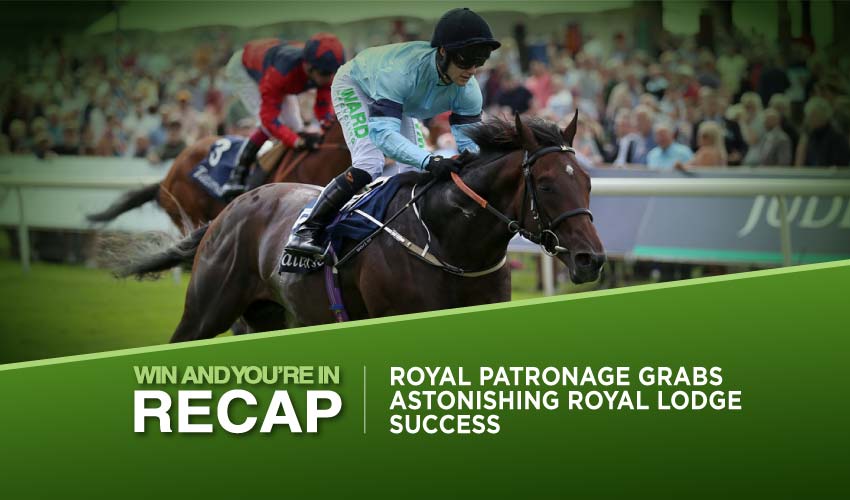 The previous days at the Newmarket Racecourse in the United Kingdom belonged primarily among two-year-old horses who clashed in fourth of the fifth races we are will cover in this article.

On Friday, Hello You surprised her more preferred rivals and scored a G2 victory. On Saturday, her successful endeavor was followed by another underestimated youngster, namely Tenebrism, who scored her G1 win. Perfect Power then added his second G1 success in the Middle Park Stakes, and Royal Patronage was all heart in the Royal Lodge Stakes. The only Grade race meant for three-year-old and older horses we will talk about was won by globetrotter Benbatl.

Among fillies competing for the purse £90,000.00, the G2 turf race resulted in the success of an underestimated David Loughane bay Hello You (7-1). She started the season with Ralph Beckett and managed to place twice at the Grade scene but as she moved away from him, her two next performances were nothing special. Therefore, it was a question of whether she could return to finer runs here, which she did pretty decisively. Rossa Ryan let the filly gallop behind leaders, including Oscula (4-1), while Hello You was literally the only participant whose turn of foot was, indeed, significant. At once, she equaled Oscula and romped forward, unchallenged. Cachet (9-1) closed on her in the end but couldn’t diminish the winner’s advantage much as Hello You triumphed by a length and a half in 1m 23.12s.

It was the first Grade victory for the filly, while the second Cachet also reached her best result here as she’s placed only in the Listed company so far. Reliable Oscula crossed the wire in third with Jumbly (6-1) trying to unfold her finish in the last stage but never managed to join the fight for the win. Both Girl on Film (7-1) and Majestic Glory (9-4) failed to impress, while the latter was excused by her trainer, explaining she didn’t relish the good to firm ground.

The second G2 race of Friday’s card was open to three-year-old and older horses that clashed at a mile distance for the purse of  £115,000 at Newmarket Racecourse. While Benbatl (13-8) became the first horse to win the Joel Stakes for the second time. He succeeded here in 2019, but as a seven-year-old in 2021, he had to face much younger rivals on the turf surface, yet he was simply the best once again.

The globetrotter trained by Saeed bin Suroor has collected victories in Dubai, Caulfield, or even Munich, and being the classy and consistent horse he’s always been, Benbatl commenced this season with a second-place at the G2 scene in August. Upon such a fine performance, he was perceived as the main threat for preferred Master of the Seas (11-8). The Charlie Appleby’s three-year-old charge ran to second place in the 2000 Guineas and was returning to action in the Joel Stakes; still, the hiatus probably made itself known.

Master of the Seas traveled in the midfield, but when asked some questions, it took time before he rallied at the barrier, while it was too late to actually catch Benbatl and brilliantly running Pogo (14-1). The latter set the pace from the start, and the former sat behind him; therefore, Benbatl had enough space to attack the leader, got in front of him, and under Oisin Murphy, the warrior displayed his class once more to win by ¾ of a length. He crossed the line in 1m 34.56s. Five-year-old Pogo seems to be in his best form ever, finishing in the top three at the G2 scene for the second time in a row; moreover, he didn’t have to bother much to hold off Master of the Seas in third and Laneqash (17-2) in fourth.

The first anticipated race of Saturday’s card delivered a thrilling finish as Royal Patronage (7-2) kicked off this G2 turf event for two-year-old colts and geldings and trying to earn most of the purse of £100,000, he set a fast pace.

As the field covered the first half of a mile, joint-favorite Coroebus (85-40) made a move, and piloted by William Buick, he romped to the first place and drew clear of his rivals. Royal Patronage trailed back to second; however, when Jason Hart urged him to return to his prominent position, the Mark Johnston’s trained bay picked it up again. At first, he struggled at the barrier, so the jockey had to point him outside of Coroebus, who still looked like a clear winner, yet the inexperienced colt idled at the front, which posed the right chance for Royal Patronage. The Wootton Bassett bay then charged forward, and demonstrating his courage, he passed the leader by in the last stride, bagging his third victory in a row. The talented colt won by a neck in 1m 38.06s, but Coroebus showed huge potential once again. However, he needs to mature a bit. Still, he is a Grade score in the making.

Unconquerable (33-1) is another green participant who managed to run well as he finished third, leaving joint-favorite Masekela (85-40) in fourth. Both Masekela and fifth Howth (18-1) had some promising performances under their belts; they failed to impress here, though.

The favorite was disappointing also among two-year-old fillies in this G1 turf race over 6 furlongs as the purse of £283,750 attracted Sacred Bridge (13-8), an impressive G3 winner, who didn’t fire at all this time.

In the end, the race was only about two fillies: Flotus (11-1) and Tenebrism (14-1), and while the former had a great start and went for the first place, the latter dwelt and galloped at the rear of the field. Flotus failed to deliver at the Grade scene in the past, yet showed exciting form last time out, which she just confirmed at Newmarket Racecourse. She led the pack with enthusiasm throughout the whole race; moreover, she managed to draw clear of all her rivals, including the much more preferred fillies; however, her path to success was to be crossed by an unexpected challenge. Although Tenebrism was the last to jump out of the gate, she swiftly got into a smooth motion and traveled sweetly under Ryan Moore.

As the other contestants were striving to close on the leader in the final stage, it seemed that Tenebrism had no chance, but then she suddenly switched to another gear, went past all her rivals, and copying the barrier, she swung past Flotus as well. The daughter of star sprinter Caravaggio won by a length in 1m 11.00s, but it certainly didn’t look like she was done. Unbeaten in two starts, there may be big things ahead of this Aidan O’Brien-trained bay.

Flotus also showed great potential, being quite clear of third Sandrine (3-1), who’s maintaining her form since her debut in May. Guilded (10-1), the biggest outsider, grabbed fourth place ahead of consistent Desert Dreamer (14-1). Preferred Sacred Bridge made no impression in the final stage and got home in eighth.

The last G1 turf race of the afternoon was also meant for two-year-olds who competed for the purse of £266,875, while preferred Perfect Power managed to unfold his finish at last and strike gold. Over the distance of 6 furlongs, the Richard Fahey trained bay settled at the rear of the field as Christophe Soumillon relied on the bay’s massive turn of foot he displayed in the Prix Morny last time out.

The already G1 winning colt then had a lot to do in the final stage as he had to get into the right rhythm and find a space for his finish. In the end, the jockey took him outside and suddenly even eight of all 10 participants lined up, all fighting for the win. However, Perfect Power had some more in the tank, dug deep, and romped forward to his second G1 victory. Cementing his position as one of the best two-year-olds of the season 2021, Perfect Power crossed the line in 1m 11.32s, edging second Castle Star (12-1) by a half of a length.

The race’s finish was a tight one as Castle Star was bettered last time out by both Go Bears Go (7-2) and Dr Zempf (9-2), who took the fourth and eighth place this time, respectively. Also, Armor (9-1) switched places with Caturra (12-1) as the former managed to make some room and reach third place at least, while the G2 winner Caturra struggled in the final strides and had to settle for the fifth. Twilight Jet (28-1) was the last to mention who kept the pace with the best until the end, finishing in sixth place.

Follow us on Social Media for instant Newmarket Racecourse news!