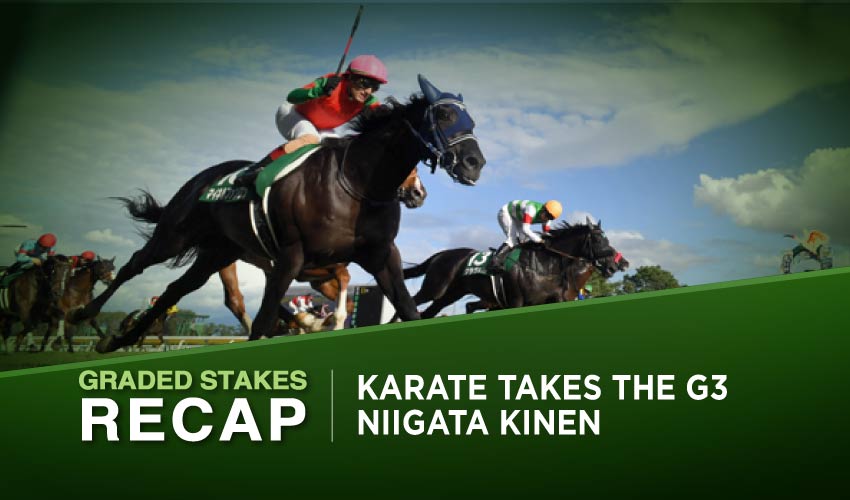 Three G3 turf races took place at the Japanese tracks during the weekend. On Saturday, Dura was the best in a field of two-year-olds in the Sapporo Nisai Stakes, where she recorded her premiere Graded victory. On Saturday, London Plan scored the Kokura Nisai Stakes after displaying a breath-taking finish from last to first, while Karate caught three-year-old and older horses off guard in the Niigata Kinen.

The G3 race for two-year-olds was held over the distance of a mile and a furlong, while the field of fourteen participants competed for the purse of 59,300,000 Yen. On the turf surface, Dura (16-5) started off as a favorite, and under Arata Saito, she had a peaceful trip in the midpack.

She improved her position throughout the race to turn for home with lots of space in front of her, which she superbly used in the final stretch. As Doe Eyes (136-10) seized the lead, Dura challenged, and after a brief fight, the Yasuyuki Takahashi bound bay prevailed by a length. Crossing the wire in 1m 50.00s, Dura triumphed before Doe Eyes, with Diamond Hands (51-10) coming home in third.

The victorious daughter of Duramente came into the race with two outings under her belt. She finished fourth in her debut, coincidentally behind Doe Eyes, upon which she scored a maiden. She was quite respected for the Sapporo Nisai Stakes, and she showed why, as her premiere Graded win suggested, she could be capable of succeeding even among the elite of two-year-olds.

Behind second Doe Eyes, going well, too, finished Diamond Hands, while another preferred colt, Chandeleur (7-2), didn’t draw on his brilliant debut performance at all and had to settle for seventh place.

The second G3 race of the weekend at the Japanese tracks was open to three-year-old and older horses who clashed over the distance of a mile and two furlongs. The purse of 82,700,000 Yen lured in a field of eighteen contestants, including Karate (21-1), who didn’t hit turf the track as one of the favourites, yet should’ve been more respected because he scored the race by one and ¾ of a length.

Piloted by Akira Sugawara, Karate galloped in the pack quite close to the front, and once they turned for home, the six-year-old horse bolted up. The Yasuyuki Tsujino took command and didn’t allow his rivals to get in front of him, crossing the wire in 1m 58.90s. You Can Smile (207-10) delivered a beautiful finish from the rear to secure second place before Feengrotten (13-2).

Karate, the son of To The Glory, scored his first G3 win in 2021 and placed even at the G2 stage; therefore, he was a viable chance in Sunday’s race. In the end, he was able to add another Graded success to his resume as he once again showed how gutsy and diligent he is. After all, he scored despite carrying the biggest weight here.

You Can Smile was another participant who caught the eye because the seven-year-old won this exact race in 2019 and hasn’t won since then, but on Sunday, he just proved to be suited by the Niigata Kinen. The only three-year-old in the field, Feengrotten, ran a solid race in third even though he looked defeated amid the final stretch.

Thirteen two-year-olds met up in this G3 turf race, offering the purse of 59,280,000 Yen. They covered the distance of six furlongs, while London Plan (32-5) was the early trailer here, but Kohei Matsuyama aboard didn’t panic in the slightest.

He only urged his mount to close on the field, upon which the Hiroshi Miyamoto trained colt delivered a powerful finish in the final stretch. He passed by every single one of his rivals to triumph in 1m 8.10s, leaving Ballerina (31-1) in second by ¾ of a length. Sylpheed Reve (50-1) also came up with a turn of foot which was enough to secure her third place.

London Plan belonged among the chancy participants of the Kokura Nisai Stakes; however, nobody has probably expected the son of Greater London to display such a kick from last to first. Performing something like this in a second career start and a second victorious one definitely deserves attention, and the colt should be quite respected in his future outing.

Ballerina and Sylpheed Reve also relied on their finish and secured places thanks to that, while preferred Protoporos (8-5) had to settle for fourth place. Graded and Stakes winners Mikatte Yondeii (11-2) and Cri D’Ame (26-5) showed almost nothing here and didn’t draw on their previous efforts.