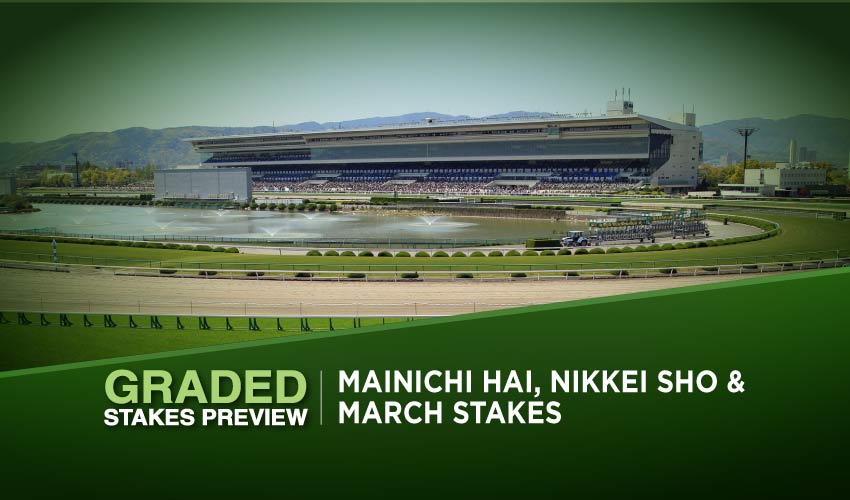 Several exciting Graded races are to be held in Japan this weekend, while Saturday’s card at the Hanshin Racecourse offers the G3 Mainichi Hai for three-year-old colts.

The race saw victories of likes as Shahryar or Blast Onepiece in the past, and in this year’s edition, newbies to the Graded scene look prime to strike gold as both Piece of Eight and Douradores have fine smaller victories under their belts. At the Nakayama Racecourse, exciting stayers, including Classic winner Titleholder, will clash in the G2 Nikkei Sho on Saturday, and on Sunday, older horses aim at the G3 March Stakes.

A consistent duo of performers, Bullbear Iride and Omega Rainbow, will meet, for example, a G1 placed horse Another Truth.

The purse of 76,540,000 Yen attracted a field of ten three-year-old colts who are about to clash at the Hanshin course when covering the distance of a mile and a furlong. This G3 race is held on the turf surface, while it’s the Sakae Kunieda bound colt Command Line who piques interest at first sight, given he showed up in the G1 Hopeful Stakes in December.

He failed to impress back then; however, he aimed at the race after he bagged the G3 Saudi Arabia Royal Cup in October. Command Line suggested he should be a decent colt for Graded races by that performance, so if he forgets the unfortunate outing in the G1 company, he needs to be considered on Saturday. Regarding Graded events, Tendence trained by Kazuya Nakatake hasn’t won a Graded event but snatched up third place in the G2 Tokyo Sports Hai Nisai Stakes in November behind talented Equinox.

Still, he didn’t manage to went on to bag a G3 victory when faced with a chance in January, upon which he scored a Stakes race in February. Therefore, he should be in form, but his class isn’t really certain yet. Besides some participants who have already started among the Graded company without success, there are several colts in the field who are yet to experience a fiercer race, including Riad who won a Newcomer race and then went on to finish second in a Listed race.

Finally, we have some contestants here with victories only at the Stakes stage, namely Piece of Eight who gamely won the Armeria Sho, and then Douradores , scoring the Saintpaulia Sho easily at the Tokyo Racecourse. Both these colts oozed class last time out, and we see huge potential in them, so let’s see how they fire against rivals with some Graded experience under their belts.

Our Mainichi Hai betting pick is:

Piece of Eight because of his most recent victory that was very promising. We really like Douradores, but Piece of Eight looked a bit more mature, which could make a difference at this point.

This 129,260,000 Yen race is open to four-year-old and older horses who will meet at the distance of a mile and four and a half of a furlong. Fifteen participants are about to fight for the win in this G2 turf event in which four-year-old Titleholder could shine.

The Toru Kurita bound colt showed some talent in 2020, and in 2021, he bettered Schnell Meister at the G2 scene and finished second in the Japanese 2000 Guineas. Titleholder proved to be one of the most reliable three-year-olds in 2021 as he was sixth in the Japanese Derby and impressively scored the Japanese St Leger when destroying the competition by his front-running tactic.

Indeed, he had a weaker moment throughout the season, but he concluded it with a good fifth place in the Arima Kinen behind great Efforia. Although Titleholder numerous times showed he is capable of shining basically at any distance from a mile to almost two miles, we feel he’s strongest at the longer ones in particular, so on Saturday, the son of Duramente could bag another Graded victory.

The only issue could be that he hasn’t hit the track since December, unlike one of his main rivals, Asamano Itazura. The four-year-old offspring of Victoire Pisa didn’t enjoy any success in the Classic races of the 2021 season, failed to impress also in the Arima Kinen, but his seasonal highlight came in a race where Titleholder flopped.

Asamano Itazura won the G2 Asahi Hai St.Little Kinen back then, but on other occasions in which he faced Titleholder, he was bettered by him. On Saturday, he could use the fact he’s been out in 2022, though, taking fourth in the G2 American Jockey Club Cup in January. The race was scored by King of Koji, while Boccherini snatched up the third place, but he was already weakening, and Asamano Itazura missed him on the line just by a nose.

Divine Force is another participant to consider as the six-year-old horse has spent most of his career in a smaller race; however, he morphed his final start of the 2021 season into his premiere Graded victory. Back then, the Ryo Terashima trained bay thrived at the extreme distance of two miles and a furlong at the Nakayama racecourse, bagging the G2 Sports Nippon Sho Stayers Stakes in front of another classy horse, Iron Barrows.

By this success, Divine Force hinted he could belong among the stayers’ elite in Japan as his form could be just peaking in 2022, so he might be the main rival for Titleholder.

Five-year-old Heat On Beat has been a reliable charge for Yasuo Tomomichi, consistently collecting wins and places at the Stakes level, but once the trainer sent him to the Graded company in 2021, he was bettered only by Win Kiitos in the G2 Meguro Kinen.

Heat On Beat then took two other places in the G3 races, while Win Kiitos finished second in another G2 but failed to have a say in the G1 events. Both of them should fight for a solid place on Saturday, but it’s difficult to picture them beating the favourite.

Still, the first mentioned could enjoy some progress, which applies to four-year-old colt Wide Emperor who aims at the Graded scene only for the second time. However, he’s young and there could be something about him.

Our Nikkei Sho betting pick is Titleholder, the 2021 winner of the Japanese St Leger, whose class should be enough to strike gold here.

On the dirt surface, sixteen participants will compete for the purse of 72,820,000 Yen when covering the distance of a mile and a furlong. The G3 is, indeed, open to four-year-old and older horses; however, there’s not a single four-year-old in this competitive field, so it’s just basically a clash of older horses and geldings.

Six-year-old Bullbear Iride still hasn’t won a Graded race, but after bagging a Listed in August 2021, he performed quite well at the G3 stage and last time out, he showed up in the G2 Tokai TV Hai Tokai Stakes at the Chukyo Racecourse where he finished third.

After such a performance, he should have a lively chance in Sunday’s race, given it was at the same distance and the Haruki Sugiyama trained horse has been recently a very reliable runner. Six-year-old Omega Rainbow has a similar record as in 2021; he collected three places in the G3 events at distances ranging from six to eight and a half of a furlong.

He commenced the new season with a fifth place in the G3 Negishi Stakes, where we expected more of him; still, he could make amends on Sunday as we believe he won’t mind a slightly longer distance.

Another Truth is an interesting contestant due to his third place in the G1 Champions Cup in December; however, his next two outings weren’t really outstanding.

He should be classy enough to score this as a couple of his rivals, Cadenas and Meisho Hario, competed among the G1 horses, too, but weren’t successful at all. Still, they have always looked ready to win a G3 race, so they shouldn’t be discarded in this competitive field. Eclair Sparkle and Danon Splendor have enjoyed some moments in the spotlight but at the Stakes stage.

Our March Stakes top choice is Bullbear Iride, who is consistent, willing, and basically a Graded victor in the making.

Follow us on Social Media for instant Mainichi Hai updates!