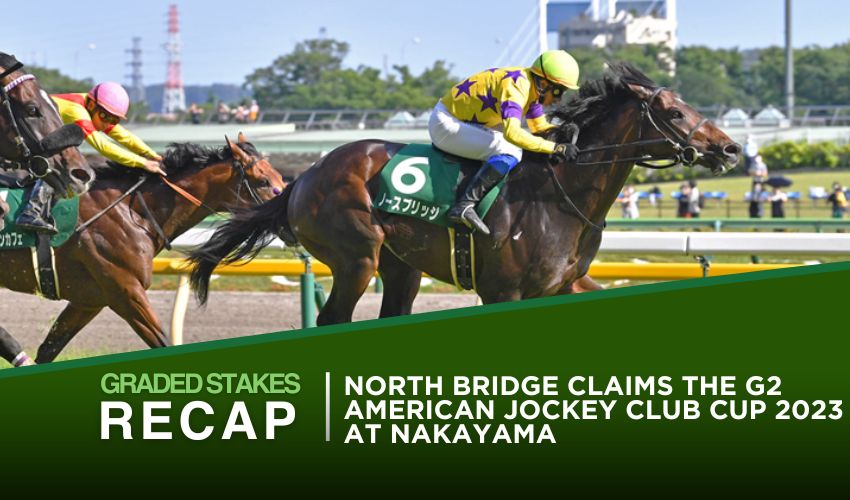 As they broke from the Nakayama gate, it was clear this would be run at a furious pace as Shamrock Hill and Babbitt went to the speed.

Hot favorite Gaia Force had also broken smartly and jockey Christophe Lemaire settled his horse in fifth in the two-lane to get a clear run, while the eventual winner NORTH BRIDGE found a nice stalking position in sixth.

The order changed little as they whizzed down the backstretch, but Shamrock Hill was starting to back out of things as they reached the far turn.

Jockey Iwata was momentarily caught behind the early leader but switched to the two-lane to get a clear run. As they entered the home stretch, Babbitt took over, but he was soon challenged by North Bridge who took it up at the 300-meter mark and widened by two lengths.

Uberleben and Echt had made ground wide and both made efforts to close down the leader, but North Bridge held well for a comfortable three-quarter length victory.

The favorite Gaia Force held well for the fifth spot and should soon be back in the winner’s circle with a stretch out in distance next time giving plenty of upside.

Promised Warrior lands the four-timer with a powerful gate-to-wire performance to take out the Grade 2 Tokai TV Tokai Hai Stakes.

There was drama at the start as Vanyar bobbled badly as the gates opened and unshipped jockey Kiwamu Ogino.

Straight from the off, the eventual winner PROMISED WARRIOR set out his tactics, and it would be catch me if you can for the rest of the field. He was followed into the backstretch by the well-fancied Hayabusa Nadekan and the outsider Auvergne.

The leader was not going at breakneck speed, and jockey Bauyrzhan Murzabayev had his rivals stacked up behind.

The short-priced favorite Hagino Alegrias had settled in a nice stalking spot on the rail and was sixth, about 5 lengths off the speed. As they reached the end of the backstretch, the leader was just a length clear with another 8 lengths covering the next 13 runners who were stacked up waiting to pounce.

As they hit the top of the stretch, the leader injected a sharp burst of speed and quickly widened two lengths clear of Hayabusa Nadekan, but it was here that the favorite started to close strongly.

The riderless Vanyar was also joining in and as they went for the wire, the favorite was impeded slightly by the loose horse, but not enough to affect the result, and this was an excellent tactical ride by the winning jockey to bring up the four-timer for the progressive winner Promised Warrior.

Keep up with Horse Racing Tote and anticipate the latest Pegasus Cup Odds. We offer the World’s major Racetrack Results. Sign-up and get up to a 10% horse rebate. We offer the best horse rebate, in the Business!

Take advantage of our free Horse Betting Guide and become a winner today. We offer a guide for all levels!