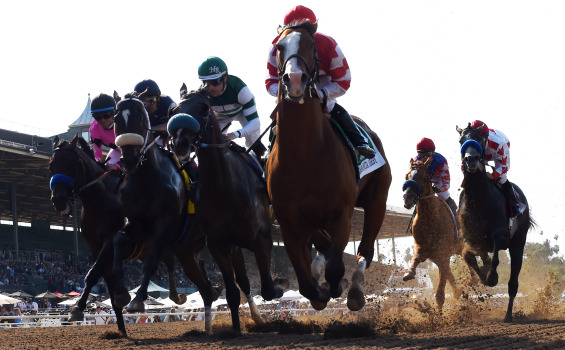 We’re set to see some big weekend graded horse races taking place at tracks like Gulfstream Park and Oaklawn Park. One such event is the Pegasus World Cup series, which attracts some of the best runners in the sport. Let’s take a look at the odds for some of this weekend’s top graded horse races.

The Pegasus turf field is being led by Hall of Fame trainer Todd Pletcher’s Colonel Liam, who is coming in at +350. This will be his first graded stakes outing, with his first career start taking place less than a year ago.

Eclipse Award finalist Irad Ortiz Jr. will have the call as jockey.

The second choice at +450, Eclipse Thoroughbred Partners and Twin Creek Racing Stables’ Largent is coming off a win in the Ft. Lauderdale Stakes (G2T) on Dec. 12 at Gulfstream.

At +800, The Elkstone Group’s Social Paranoia took an allowance optional claimer on Dec. 16 and won the Appleton Stakes (G3T) locally back in March. He will be another big name to watch out for in the field.

This will be a highly competitive race, as four of the 12 entries are one-time grade 1 winners. Those names are Next Shares, Storm the Court, Aquaphobia, and Say the Word.

Another big name to look out for is Will Farish’s homebred 2019 Runhappy Travers Stakes (G1) and Jockey Club Gold Cup (G1) winner Code of Honor. Coming in at +450, he will break from Post 10 for trainer Shug McGaughey.

There are some question marks surrounding runners like Sleepy Eyes Todd, who is coming in at +800. While he is undoubtedly an impressive runner, having won races like the Charles Town Classic (G2) at the Pegasus’ 1 1/8-mile distance in August, he has yet to prove himself at the grade 1 level.

In his most recent start, he took the Mr. Prospector Stakes (G3) at Gulfstream in December.

A solid choice that could pay well at +1000 is Harpers First Ride. He took 10 of 17 career starts and has finished first or second in his last six races, including the Pimlico Special last fall.

Make sure to check Horse Racing Tote for all the latest horse racing news, previews, and results, as well as up to the minute reports from our experts on the Road to the Kentucky Derby. And Follow us on Social Media for Horse Racing Tote instant updates!