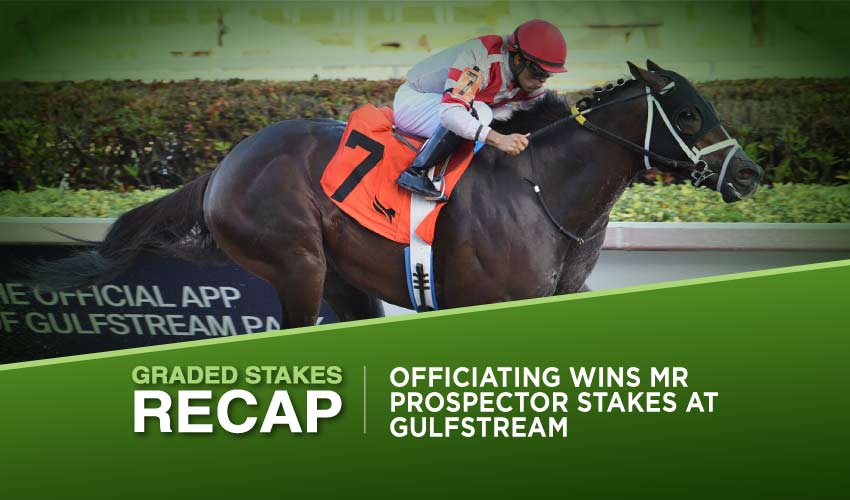 The opening Graded stakes of the Gulfstream Park season sat center stage on Saturday, with the Mr Prospector bringing together a tight field of seven who all had something to prove. At the wire, it was Officiating who proved he could handle a fast main track, the three-year-old seeing off his elders and making his breakthrough at Graded level.

The lack of rain is never a concern on the Miami beaches, but a few blocks inland at Gulfstream Park, the home of Saturday’s feature Mr Prospector, the issue of a dry track was vexing trainer Saffie Joseph. His second-string Officiating, a 7-1 chance, was known to prefer an easy surface, had never won on a fast main track, had won a stakes in the slop over course and distance two starts ago. The underfoot conditions were a concern, as Joseph had outlined to his connections beforehand.

“His fast dirt form hadn’t been good, but he’s been training so strong that I thought we had to give him one more try,” said Joseph. “​​I really pressed on him with faster works and he worked super, as good as any horse could work on the dirt. In the paddock, I said to [owner] Peter [Vegso] ‘He’s going to win or get beat 20 lengths’. Thankfully he handled it well.”

Officiating didn’t get beat 20 lengths. He won, looking perfectly at home on the dry main track as he sat a few lengths off the brisk fractions set by his better-fancied stablemate Wind Of Change, with the favourite Endorsed towards the back of the seven-runner field. The leader pulled them through half a mile before Luis Saez brought Officiating up to challenge three wide as they exited the turn, and at the top of the lane there were four abreast across the track.

Not for long. Officiating put away his closest rivals at the eighth pole and surged clear, opening up a gap that the fast-finishing Endorsed couldn’t close, although he got within three-quarters of a length at the wire. The well-fancied Dennis’ Moment was third, a half-length further back, as the winner stopped the clock in 1:22 and one-fifth.

“I wanted to be in a good spot following the speed,” said Saez, for whom this was the third winner of the day. “When he came to the top of the stretch he gave me that good kick, that good turn of foot, and he fought to win the race. That was exciting.”

This was success at the first attempt in Graded company for Officiating, a three-year-old son of Blame and a half-brother to 2017 champion two-year-old filly Caledonia Road, as he took his lifetime record to three-for-14, all his wins coming at this track during 2021, including a state-bred maiden on turf. He is set to keep going through the winter at Gulfstream, rain or shine, dry track or wet track, with Joseph seemingly more eager to step him up to a mile rather than bring him back in distance.

Sign up and get a 10% rebate. Make sure to stay tuned for the latest Horse Racing odds, racing entries and races results.