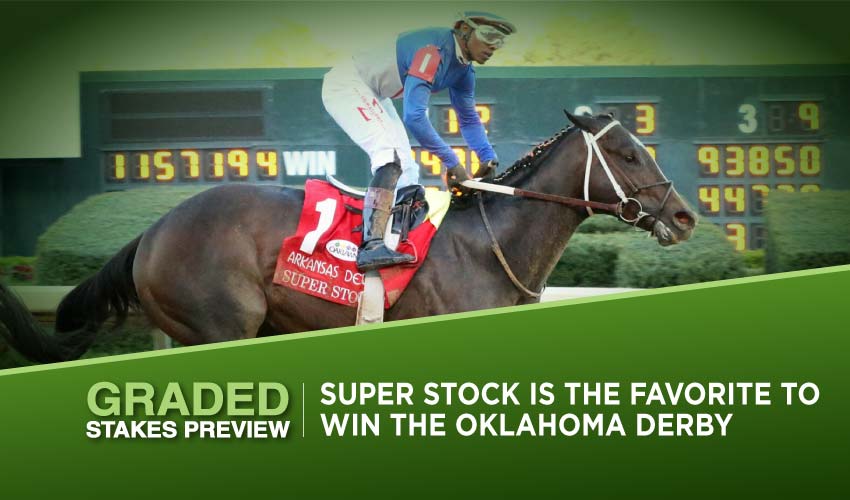 Remington Park in Oklahoma City hosts its biggest day of the year on Sunday, with two G3 Oklahoma Derby and Remington Park Oaks. Big-league trainers Brad Cox and Steve Asmussen are well represented in both contests, and with plenty of second-rank Derby and Oaks form on offer – with even a runner from the Kentucky Derby and Kentucky Oaks on display – the competition will be strong and the winners tricky to find.

There are lots of Derbys around the nation, around the world, and it seems as though Super Stock (7-2) has run in most of them. When he breaks from the gate in the Oklahoma Derby at Remington Park on Sunday it will be his sixth successive start in a race of that label, and he has every chance of winning his third one.

The Steve Asmussen-trained colt even had a go at the Kentucky Derby, although no-one really noticed. He’s more of a horse for the provinces, as he showed when a comfortable winner of the Grade 1 Arkansas Derby at Oaklawn in April. It wasn’t a great Grade 1, but it’s more than anything else in this field has managed.

Trips to Texas and Iowa for more Derbys weren’t so successful, but last time out Super Stock ran his best race since that Oaklawn score when dominating the Ellis Park Derby field at this distance, kicking clear at the top of the stretch and drawing off to win by three and three-quarter lengths. That brings him here at the top of his form, there are no distance concerns, and he doesn’t need any particular pace scenario.

His main rivals in the market are the exacta from the Grade 3 West Virginia Derby at Mountaineer Park at this distance, in which Mr Wireless (3-1) gave 2lb and a length-and-a-quarter beating to Warrant (5-2), who was never in a position to threaten Mr Wireless after he had gone clear on the turn.

These two were also the exacta in the Texas Derby at Lone Star but the other way round, with Warrant too good for Mr Wireless by three-quarters of a length, with Super Stock back in fourth. These three ‘Derby’ horses are evenly matched, and perhaps given that Warrant was coming off a nine-week layoff in that Mountaineer defeat, the Brad Cox-trained colt may be expected to step up for it. Mr Wireless, in between, landed the Grade 3 Indiana Derby, and no firm case can be made for one of the three over the other two.

Flash Of Mischief (8-1) is also a Derby winner, his version being the St Louis Derby, but if we are comparing Derbys it doesn’t quite match up to the front three in the market. Team Merchants (6-1) was not that far behind Medina Spirit at Del Mar last time over a mile, although he fell away in the closing stages and this extra furlong doesn’t look ideal.

The remainder are easy to ignore; Parrot Head (20-1) has been winning claimers on turf, Dial In For Lute (15-1) won an allowance here over a mile and Defeater (12-1) beat the rest but had no answer to Penn Derby hopeful Speaker’s Corner in a Saratoga allowance latest. If Speaker’s Corner lights up Parx on Saturday night then we’ll think again, but this looks best left to the tried-and-tested ‘Derby’ trio.

Betting Prediction The choice for the Oklahoma Derby is not straightforward, but of the three leading contenders we prefer Super Stock based on his fine showing at Ellis Park last time.

The fillies’ equivalent is at first glance equally closely contested, but the form is a little easier to unpick, with Pauline’s Pearl (5-2) deservedly morning-line favourite on the strength of her performance in the Grade 3 Charles Town Oaks last time out.

She outran her odds at the West Virginia track, keeping on gamely from mid-stretch to fill the runner-up spot, and that was a step up from her previous effort in the Grade 3 Iowa Oaks when third behind Army Wife, form that may look pretty good after the Cotillion at Parx on Saturday.

This race is not as strong, and Pauline’s Pearl – already a Grade 3 winner in the Fantasy at Oaklawn in April, and the only graduate from the Kentucky Oaks, in which she was eighth, in this field – is another major contender for trainer Steve Asmussen, who has a big chance with Super Stock in the Oklahoma Derby. Her barnmate My Girl Red (15-1) will find this much harder than when winning an allowance at Lone Star two starts ago.

Lady Mystify (4-1) was an easy gate-to-wire winner at Del Mar in July, but was then beaten a long way in the Grade 3 Torrey Pines at the Californian circuit and may need to be found an easier spot, while Amendment Nineteen (7-2) moves into Graded company for the first time after finishing runner-up in a Saratoga allowance, a decent effort given that the third horse was almost ten lengths adrift.

She has blue-chip connections – trainer Brad Cox, owner Juddmonte Farms – and with only three runs to her name there is little doubt that there is more to come. It would be no surprise to see her leave that allowance form far behind, while the extra furlong here could help her do just that.

Another going places is Lovely Ride (3-1), who sandwiched a dull effort in the Grade 3 Indiana Oaks with two good victories, most recently when wiring the field to win a black-type at Parx, hanging on dourly in the last sixteenth to win by a half-length. If either filly steps up then life could get tough for the better-credentialled Pauline’s Pearl.

Two wins at Prairie Meadows leave Bobbin Tail (10-1) a long way short in this company, and course winner Hailey’s Melody (15-1) is likely to be another pace angle but no more influential than that.

Betting Prediction Two up-and-coming fillies will make it tough for the favourite and our choice is Amendment Nineteen, whose run at Saratoga indicates the potential for much more.