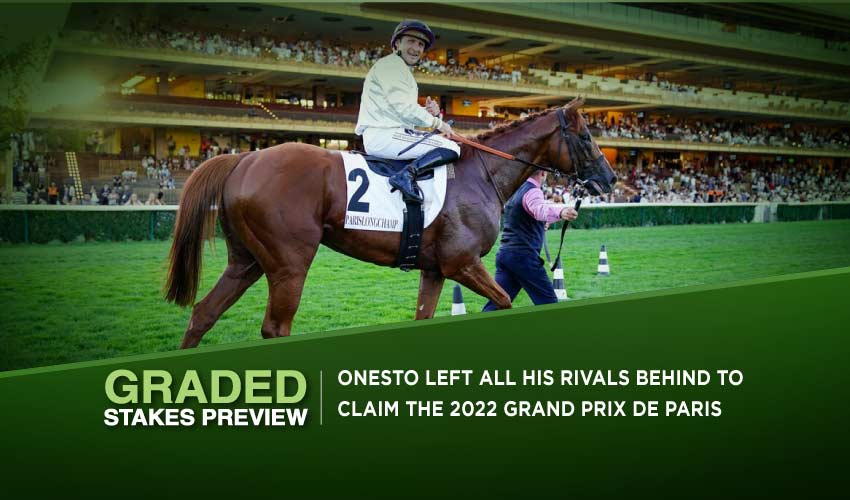 The traditional meeting on the 14th of July in Paris Longchamp Racecourse offered three Graded races, including the 2022 Grand Prix de Paris, where Frankel’s son Onesto bagged the victory and entirely outshined the raiders from the British Isles. Raclette prevailed among three-year-old fillies in the G2 Prix de Mallaret, and Quickthorn made all in the Prix Maurice de Nieuil to add another great result to his record.

In the field of six three-year-old fillies, Raclette (12-5) scored this G2 turf race over a mile and a half. Vying for the purse of €130,000, the Andre Fabre bound filly travelled on the turf surface in second place, then took command in the final stretch, and piloted by Olivier Peslier; the bay dug deep to keep the lead before finishing rivals.

Raclette crossed the wire in 2m 31.40s with a narrow advantage of a head over second Lastotchka (41-5), while third Baiykara (4-5) was third just by a short neck.

Although Raclette entered the season with only eighth place in a Classic trial and then didn’t place even at the Listed level, her form considerably improved in June when the daughter of Frankel delivered in Listed.

Her victory was comfortable back then and suggested that Raclette should be a vital player in the Prix de Mallaret; however, her brave effort exceeded expectation. Of course, she didn’t prevail by far, yet her will to win was respectable as she had to defy two finishing fillies at the same time.

While Lastotchka found room on the inside, preferred Baiykara was flying on the outside. Both of them look like talented runners with bright futures, but this time, Raclette was too good for them.

Although the field of this G1 turf race boasted several exciting three-year-olds from the British Isles, the treasured feat held at the distance of a mile and a half remained at home thanks to Onesto (33-10). The Francois Chappet bound chestnut seized most of the purse of €600,000 after galloping in the last place for the whole race.

In the final stretch, Stephane Pasquier faced the task of finding a room for his mount, which he subsequently managed to do, and once Onesto had free space in front of him, he quickly left his rivals behind, including leading Simca Mille (51-10). When seizing his premiere G1 victory, Onesto crossed the wire in 2m 27.76s by a neck as Simca Mille fought bravely. El Bodegon (39-10) took third.

The victorious son of Frankel is no stranger to strong fields in the season 2022 as he commenced the three-year-old campaign in a Classic trial where he failed to make an impression. However, when pointed to a longer distance, Onesto scored a G2 race at Saint-Cloud, then finished fifth in the French Derby, while he crowned the series of great results on Thursday with a bang in this treasured race.

Still, Simca Mille also deserves some respect as his performance was quite good, too, while third El Bodegon just snatched up a third place thanks to his class. The distance proved to be too much for him, though, while favourite Eldar Eldarov (29-10) didn’t have a single bright moment, was soon beaten and came home in fourth.

This G2 turf race quickly turned into a one-horse-show as Quickthorn (2-1) took command right after the start of this mile and six furlongs-long race and didn’t let anybody pass him by.

Six four-year-old and older horses competed for the purse of €130,000 here, while Tom Marquand set the pace aboard Quickthorn, then urged him to draw clear from his rivals in the final stretch, upon which the favourite scored in 2m 54.83s with the advantage of 1 and ¾ lengths over second Jannah Flower (53-10).

The four-year-old filly delivered an eye-catching finish from the rear of the field to sentence The Good Man (19-10) to third place.

Trained by Hughie Morrison, Quickthorn couldn’t shine in the Graded company in 2021 as scoring in Class 2 was his maximum, but in the 2022 season, his results are very promising. After running in second behind staying stars Trueshan and Princess Zoe at the Listed and G3 stage, the bay son of Nathaniel triumphed in the G3 Henry II Stakes in Sandown and proved to be in great form also on Thursday.

Still, Jannah Flower showed a fine effort when finishing from the last place to catch the second one in front of The Good Man, with the rest of the field being no match for the first three.