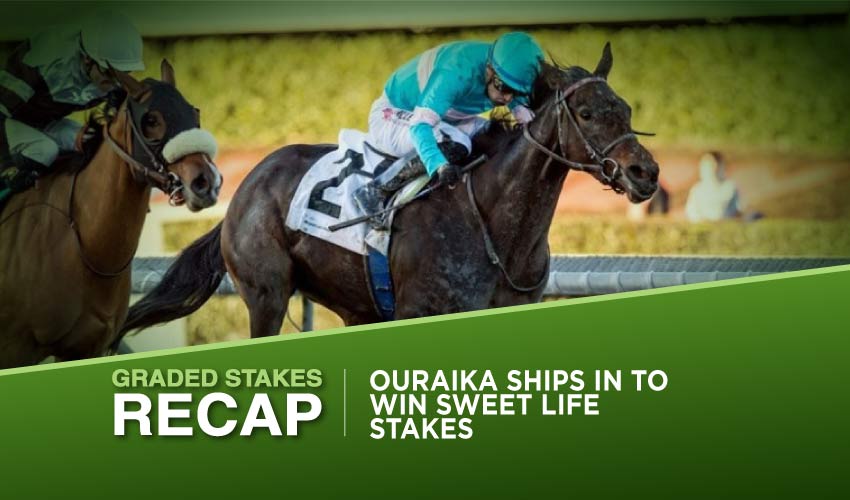 Saturday didn’t favour the favourites throughout the States as both Gulfstream Park and Santa Anita Park saw surprising results in their respective G3 feats. At first, Gear Jockey failed to deliver in the Gulfstream Park Turf Sprint Stakes, allowing Yes I Am Free an easy victory, and then underestimated Ouraika struck gold in the Sweet Life Stakes.

Six-year-old Yes I Am Free (8-1) looked prime to win this G3 turf sprint from the beginning. As the purse of $100,000 attracted a field of seven four-year-old and older horses who clashed at the distance of five furlongs, breaking well and using early speed was crucial here.

The Laura Cazares bound chestnut handled it perfectly, settling second behind leading Warrior’s Pride (48-10), who he passed by in the final turn. Since then, Yes I Am Free stayed unopposed at the front, surging forward to record his premiere G3 success by three and ¼ of a length, causing quite an upset in the Gulfstream Park. Crossing the wire in 56.07s, Yes I Am Free was followed home most closely by a strongly finishing duo Richy (22-1) and Belgrano (76-10) that sentenced Warrior’s Pride to fourth place. The winner was piloted by Emisael Jaramillo.

Five-year-old Gear Jockey (30-100) was a big favourite here as he’s shown such a class he shouldn’t have lost on Saturday, yet it happened most notably to a bad start and the jockey’s subsequent attempts to position his mount close to the leading couple. In the end, Gear Jockey wasted too much energy on that, being then unable to impact the race at all, crossing the wire in fifth. Moreover, he was disadvantaged by the carried weight; still, it usually doesn’t affect results much in sprint races.

The favourites were also denied in this G3 turf event meant for three-year-old fillies, covering the distance of six and half a furlong. With the purse of $100,000 up for grabs, the race attracted some interesting contestants; however, Ouraika (47-10) was considered just a place contender after failing to win an Allowance Optional Claiming, while the chances of promising duo Urban (11-5) – Kitty Katana (19-10) simply looked more appealing.

In the end, Ouraika, trained by Graham Motion, shone here under a brilliant ride delivered by Juan J Hernandez. The daughter of Zelzal galloped at the rear of the main pack, and because the jockey refused to take the filly from the fence and force her to go outside, he had to wait for a spot to open up, which, indeed, happened. Still, Ouraika had to manoeuvre a lot, but the filly was willing to do so, and as soon as there was free space in front of her, the bay charged forward.

Catching her rivals off guard, Ouraika smoothly seized leadership and won her premiere Graded race in 1m 13.98s. On Saturday, Urban gave a good effort, running close to the front to quicken up in the closing stages, finishing second just by a head, while Kitty Katana turned home quite wide and took third.