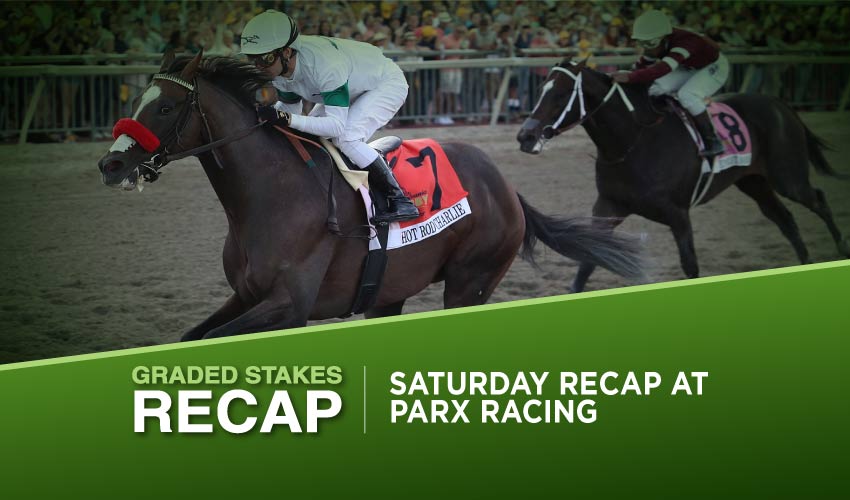 In case you missed last Saturday races, Horse Racing Tote brings you the Parx Racing Recap. Two high-class horses in the shape of Hot Rod Charlie and Clairiere won the Grade 1s, sprint superstar Jackie’s Warrior cleaned up with a dominant display, local boy Magic Michael gave the home crowd something to cheer, and unconsidered 108-1 ‘no-hoper’ Hollywood Talent showed there’s hope for us all with a stunning upset success.

‘Rock star’ Charlie is Number One

Hot Rod Charlie claimed his first Grade 1 when winning the Pennsylvania Derby at Parx Racing on Saturday, a deserved reward for his talent and his consistency but gained – as often with Charlie – with a little controversy attached.

Placed in two Triple Crown races and the Breeders’ Cup Juvenile and disqualified from victory in the Haskell, Hot Rod Charlie ($3.80) had it coming and got it with no little panache, leading at every call under Flavien Prat and keeping on strongly through the stretch to see off old rival Midnight Bourbon by two and a quarter lengths, stopping the clock in 1:48 and three-fifths. Americanrevolution was third, four and a half lengths further back.

Then, more drama. The stewards took a good look at an incident on the turn, where Hot Rod Charlie drifted out into the path of Midnight Bourbon – the pair were one-two practically throughout – who he had fouled in the Haskell. This time Hot Rod Charlie was clear of his pursuer and any interference was marginal, and the result was confirmed despite some sour grapes from Midnight Bourbon’s trainer Steve Asmussen.

“Charlie is a rock star. I’m just a roadie but I am a pumped roadie, that’s for sure,” trainer Doug O’Neill told the BloodHorse. “He has had so many hard-fought races and to not have a Grade 1 on his resume seemed so unfortunate for a horse as good as he is. It’s good to finally get it.”

Hot Rod Charlie, a half-brother to champion sprinter Mitole, now heads for the Breeders’ Cup Classic Classic at Del Mar on November 6, where Midnight Bourbon – who has yet to finish ahead of Charlie in four attempts – will again be in opposition.

It was a day for horses finally breaking their Grade 1 drought, with Clairiere gaining her first success at the top level at her fourth attempt with a comfortable score in the Cotillion.

The daughter of Curlin had finished behind divisional leader Malathaat on all three previous Grade 1 starts, but with that filly absent the way was clear for Clairiere ($7.20), who sat off the steady pace set by Always Carina until moving into contention on the turn. Ricardo Santana brought her five wide into the stretch and drove her to the lead at the eighth pole, whereupon she drew off in good style to win by two and a half lengths from Obligatory, with Army Wife a half-length away third.

“She’s kept herself in great company all year and is getting good when it matters most,” said trainer Steve Asmussen, whose filly covered the distance in 1:44 and two-fifths. “She’s getting faster at the right time.”

Asmussen was referring to the forthcoming Breeders’ Cup Distaff, the next step for Clairiere, who can count on another meeting with her nemesis Malathaat.

So easy for mighty Warrior

It looked like a cakewalk beforehand, and so it came to pass as Jackie’s Warrior blitzed to an easy victory in the Gallant Bob, giving trainer Steve Asmussen another success on the valuable Parx card.

Jackie’s Warrior ($2.10) is almost certainly the best three-year-old sprinter out there, and hardly had to break sweat here. He was in front after a furlong and was never challenged, doing no more than galloping out under a motionless Joel Rosario to win by six and three-quarter lengths from Pickin’ Time, stopping the clock in 1:08 and three-fifths. Easy work; next stop the Breeders’ Cup Sprint.

“He was enjoying what he was doing out there. He goes fast and he goes faster,” said Rosario. “Things are easy when you are on a horse like him. He wasn’t tired at all.”

Horses will make fools of us all. That was the sentiment after the Turf Monster, in which the ten-year-old Hollywood Talent, a 108-1 mega-longshot who had never won a graded stakes, belatedly enjoyed his finest hour.

Proving that there is no such thing as a horse with no chance, the veteran was given a patient ride by Ricardo Santana as Firecrow and Admiral Abe duelled on the lead. Hollywood Talent had plenty to do in the stretch but the leaders were weary and he barrelled past them to win by a length and a quarter in 0:59 and one-half. Beer Can Man closed late for second, a neck ahead of Admiral Abe.

“I am not surprised,” said trainer Juan Vazquez, unique in that respect. “I have been waiting for this race all year. I knew he could win.”

Everyone loves a local hero, and Magic Michael fits that bill perfectly. The four-year-old won his seventh race at Parx and his first graded stakes when getting the job done in the final strides of the Greenwood Cup.

Magic Michael ($11) spent much of the race in last place as Sea Foam set dawdling fractions, and still had six horses in front of him as they turned for home, but jockey Frankie Pennington worked him through the gears and he kept on dourly to cut down Last Samurai and win by a neck, with Sheer Flattery a length and a quarter away third. The time was a leisurely 2:32.

“We are local, and this is a big day for us,” said winning trainer Jamie Ness. “We took a shot, my horse does well here and my jock knows this track real well.”