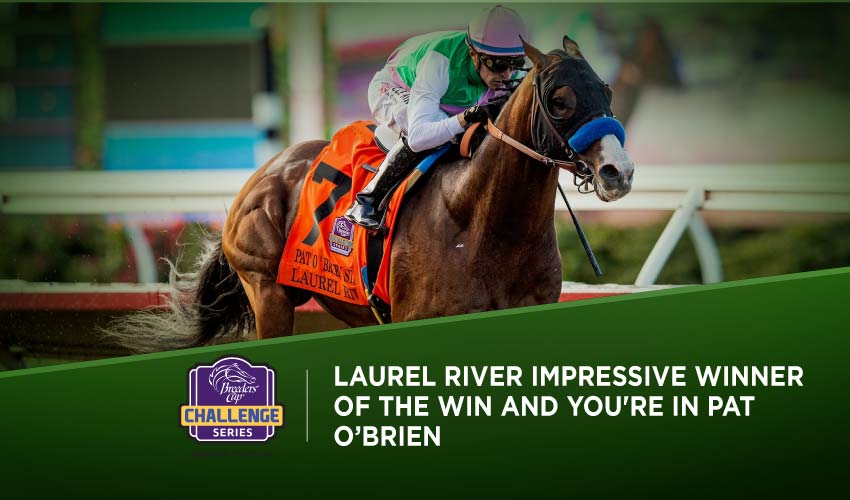 The Californian racing season is in full swing and this weekend’s card at Del Mar was headlined by two races the Pat O’Brien and Rancho Bernardo. With a host of quality horses on display we recap the very best of the action.

Heading into this year’s Pat O’Brien all the attention was on the Bill Mott trained Speaker’s Corner. Skipping other assignments to race in this year’s renewal, he was rightly regarded as the horse to beat.

Looking to cement his class, Mike Smith was positive with Speaker’s Corner positioning him right at the front – dictating the early fractions.

Rounding the final turn, he would lead a tightly packed field and attempted to turn on the jets to burst home.

When Smith asked Speaker’s Corner for more, the response wasn’t forthcoming and it was clear that he was in a bit of trouble.

Sensing that the race was on, Juan Hernandez on board the very unexposed Laurel River made his move, slipping past the inside of his more illustrious rival.

Breezing past at the furlong pole, Hernandez pressed the go button and wouldn’t be caught. Establishing a clear lead, he would ease Laurel River over the finish line, winning by 4 easy lengths. By winning this race he will now take his spot in the Breeders’ Cup Dirt Mile.

Special credit must be given to the second place horse American Theorem who might have finished closer had he not had to chart a wide course throughout.

It’s a case of back to the drawing board for the connections of  Speaker’s Corner who could only finish in  a disappointing 4th.

Only five horses competed in this year’s Rancho Bernardo. Despite there being five runners it was widely expected that the race would come down to the pair of Edgeway and Slammed.

Edgeway was looking to add another graded success to her ever growing resume whereas Slammed was looking for her first graded win.

As the race developed it was clear that the pundits and the bettors had called it right as the two protagonists quickly headed clear of the rest of the field.

It was clear that there wasn’t much to separate them.

As they rounded the final turn the two were matching stride for stride. With neither giving an inch, the two were still inseparable as they entered the final furlong. With both jockeys in full drive, it would come down to who would dig down the deepest.

Urging their mounts on as they hit the final 100 yards, it was Edgeway who just found that bit extra and as the runners hit the finish line she would go onto win by half a length.

With both horses running with huge credit it will be fascinating to see where they both end up next.

Follow us on Social Media for more Del Mar updates!