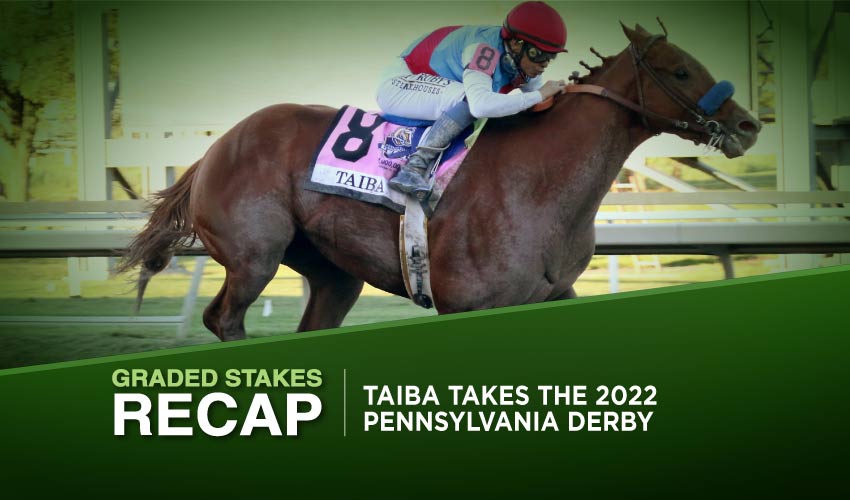 A busy, stakes-heavy afternoon at Parx Racing was lit up by a dominant performance in the marquee event, with Taiba pushing his claims for divisional honors with victory in the G1 Pennsylvania Derby. The signature of the day was gate-to-wire glory, with Society (G1 Cotillion), That’s Right (G3 Turf Monster) and Ridin With Biden (G3 Greenwood Cup) all winning their games of catch-me-if-you-can, while local hero Scaramouche took his record to six-for-seven here when landing the G2 Gallant Bob.

A little clarity came to this divisional championship when Taiba finally put his talent out there for all to see, drawing off for an authoritative victory in the Pennsylvania Derby, the highlight of Saturday’s meet at Parx Racing.

Epicenter still has the call but Taiba is not far behind him now, and the way the 7-5 favorite put three lengths between himself and the consistent G1 runner Zandon indicates there may be more to come. There was also a little sweet revenge involved with Taiba turning the tables on his Haskell Stakes conqueror Cyberknife, who ran a lackluster third, three, and three-quarter lengths further back.

White Abarrio towed the field through decent fractions but Mike Smith always had Taiba within range, and he tipped out the son of Gun Runner four wide on the turn and set him alight.

The response was swift, Taiba surging clear down the center of the track to turn back the minor threat of rail runner Zandon, on the board in another G1 but without the tactical speed to make his ability tell.

Cyberknife, outpaced at a crucial stage, came along late for the ‘show’; White Abarrio faded into fifth. The time was 1:48 and three-fifths.

“He is getting better and better,” said trainer Bob Baffert, winning a record fourth Penn Derby, all since 2014. “He’s powerful, he has speed, he’s a fighter. He ran his race today.”

This was the second G1 score for Taiba, winner of the Santa Anita Derby in April, three-for-five lifetime, and a millionaire with his share of Saturday’s purse. The next stop is likely to be the Breeders’ Cup Classic at Keeneland on November 5, where Flightline, Epicenter, and possibly Life Is Good will be in opposition.

She has been a slow burner but Society finally caught fire in the Cotillion, burning off the opposition with a devastating display of front-running to post her first G1 success.

On a speed-favoring surface, Society was out fast from the outside post and quickly on the lead, and from there on in it was a one-horse race, the 7-1 fourth-choice loose on the lead and never looking likely to be caught. She barrelled home by five and three-quarter lengths, stopping the clock in a tick under 1:43, giving trainer Steve Asmussen a record fifth win in the race.

Kentucky Oaks winner Secret Oath made a powerful run around the turn but to no avail, and that emptied the tank, with longshot track specialist Morning Matcha passing her in the final furlong to take the second spot with two lengths to spare. The favorite Green Up was a distant fourth.

“After three jumps I was in the lead and clear,” said jockey Florent Geroux. “We weren’t going crazy, but she’s just extremely quick. I simply concentrated on keeping her relaxed and there was plenty left in the lane.”

Yet another G1 winner by the prodigious young sire Gun Runner, Society is now five-for-six with a seven-figure bankroll. Her future now contains a shot at the Breeders’ Cup Distaff, in which she is likely to renew rivalry with Secret Oath and divisional leader Nest.

Horses for courses. Scaramouche simply loves it at Parx and took his record there to six-for-seven when signing for his first Graded victory in the Gallant Bob.

The 9-1 sixth-choice was drawn widest of all in the 13-hole but overcame that perceived disadvantage in style under John Velazquez, stalking the flying fractions set by longshot Speaking and taking over when the front-runner emptied out at the eighth pole.

Scaramouche had plenty left and turned back the late thrust of Of A Revolution to win by a half-length, with Runninsonofagun rallying for third, two lengths further back.

The favorite Provocateur made no show in eighth; the time was 1:10 and two-fifths. It was the first Graded-stakes win since 2015 for trainer Guadalupe Preciado, and a joint-record second success in the Gallant Bob.

There’s a first time for everything, and the Turf Monster marked a first Graded win not just for That’s Right but for trainer Michael Moore and jockey Andy Hernandez too.

The three-year-old colt has been transformed by a transfer to turf and never gave his rivals a chance here, breaking on top from his inside post and making the most of the afternoon’s speed bias.

The 5-2 second-choice was four lengths clear at the eighth pole, and although the posse closed in That’s Right had a length and a half in hand at the wire, stopping the clock in 0:57 and three-fifths.
Third-choice Boat’s A Rockin held off longshot Dr Duke by a half-length to claim the second spot, while the favorite Uncle Ernie dropped right out to finish ninth.

The third gate-to-wire score of the afternoon came courtesy of Ridin With Biden, who ran his rivals out of town when landing his first Graded win in the Greenwood Cup.

The Robert Reid-trained gelding, the 8-1 fifth-choice, was allowed his own way on the lead and put the race to bed around the turn, opening up daylight to his pursuers before rolling on under Paco Lopez to win by a length in a tick under 2:33.

Stay tuned for the latest Breeders’ Cup Odds. Check out the World’s major Racetrack Entries, and Horse Racing Results and don’t forget to Sign-up and get up to a 10% horse rebate. We offer the best horse rebate, check the Terms & Conditions here!