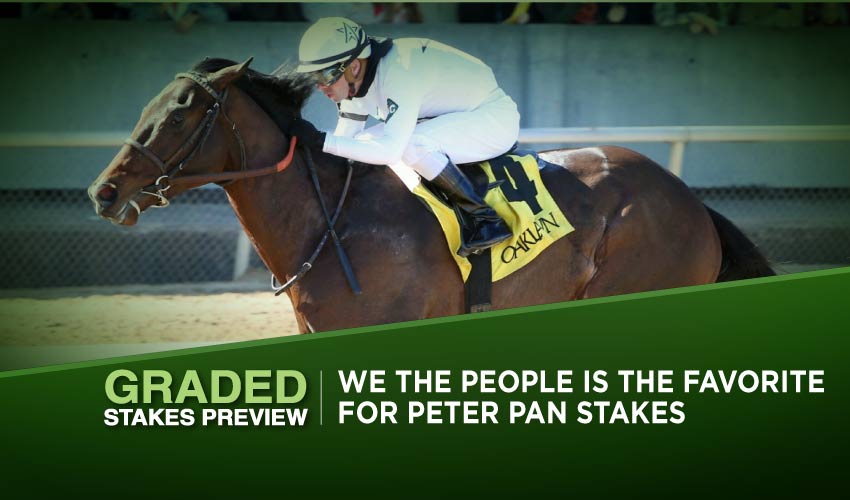 The undercard on Man O’ War day at Belmont Park on Saturday is short on quantity but doesn’t lack for quality, with We The People and Golden Glider setting the standard in the G3 Peter Pan Stakes, Officiating and Chateau renewing rivalry in the G3 Runhappy, and Bella Sofia (G3 Vagrancy) and Rougir (G3 Beaugay) bringing G1-winning form to the table.

Last weekend Chad Brown sent out high-class French import Speak Of The Devil to win a G2 at Churchill Downs. This weekend he tries the same trick with Rougir in the Beaugay, and the market predicts an identical result.

Back home in France, Rougir was a similar type to Speak Of The Devil, and struck at the highest level when winning the G1 Prix de l’Opera at Longchamp over ten furlongs. She may have found the extra yardage beyond her when seventh behind Loves Only You in the Breeders’ Cup Filly & Mare Turf at Del Mar, so the cutback makes sense and her class edge is substantial.

Brown will be eyeing the exacta, as he also runs last year’s Beaugay runner-up Lemista, who hasn’t been seen since running third in the G1 Beverly D at Arlington in August. The long absence is rarely a compromising factor for Brown runners.

Best of the rest may be Plum Ali, who was zero-for-five in Graded company last year but comes here off the back of success in a stakes at Aqueduct last month, and Runaway Rumour, who is three-for-five at Belmont and was runner-up in the G2 Sands Point over a mile-eighth here in October.

Chad Brown has a conveyor belt of ex-European talent for distaff turf races and ROUGIR – a G1 winner in France – is an obvious choice to continue the success of the system.

Peter Pan Stakes is the local prep for the Belmont Stakes (G1), which will be run on June 11.

At one point We The People was a fringe candidate for the Kentucky Derby, and now he gets a chance in the Peter Pan Stakes – the highlight of the undercard at Belmont Park on Saturday – to see whether he can measure up as a Belmont Stakes contender.

His ‘Roses’ aspirations were blown away when he was only seventh in the G1 Arkansas Derby at Oaklawn Park, but his previous success in an allowance optional claimer at the same venue reads well in a race in which only one horse has won a stakes.

That horse is the blinkered first-time Cooke Creek and it was a minor affair at Delaware Park, and his subsequent defeats in the G3 Nashua here and the G3 Withers at Aqueduct have exposed his limitations. Golden Glider has missed the board in three Graded races this year, latterly when fourth behind Zandon in the G1 Blue Grass at Keeneland, but should obviously find this easier, while Electability is unbeaten in two at Aqueduct in 2022, most recently in an allowance optional claimer over a mile, and merits this step up.

Santa Anita maiden winner Set Sail is a long way from home, but he did it well in LA, hauling off by seven and a quarter lengths, and is a major player in an open race.

Defeat in a G1 at the hands of Kentucky Derby third Zandon is no disgrace, and GOLDEN GLIDER can take advantage of this substantial class relief and return to winning ways.

The progress made by Bella Sofia last year gives her a profile that stands out in the short-field Vagrancy – as long as her final start can be ignored.

She stepped up out of minor company to easily win the G1 Test at Saratoga and followed up in the G2 Gallant Bloom over course and distance, and the only blot on her record is fourth place in the Breeders’ Cup Filly & Mare Sprint. She has a six-month layoff to overcome but has reportedly been working lights out.

Stakes-winner Miss Brazil is a likely pace angle after making all in an allowance optional claimer at Aqueduct last month, and she could be taken on by the progressive Kept Waiting, runner-up in the G3 Distaff at Aqueduct over seven furlongs and likely to be suited by this slightly shorter trip.

Two years ago Frank’s Rockette won the G2 Gallant Bloom over course and distance but hasn’t really built on that, and was beaten at odds-on in a six-furlong stakes at Oaklawn Park last month. She’ll be sharper for that first run of the year, while Assertive Style makes her Graded debut here and might need an easier spot.

It’s hard to see anything standing in the way of the progressive BELLA SOFIA, who has a distinct class edge and has already won a G2 over course and distance.

A tightly-knit half-dozen go to the gate for the Runhappy, with the first three home in the G3 Tom Fool at Aqueduct in March in opposition again.

On that occasion Officiating was a decisive winner, clearing away to win by five and a half lengths from Chateau, who in turn had a length and a quarter to spare over Repo Rocks in third. That was a career-best from Officiating, who should be forgiven his defeat in a stakes at Tampa Bay Downs next time as it was off just three weeks’ rest, and he’s now had a sufficient break between races.

Chateau won the Tom Fool and was runner-up in the Runhappy last year, while Repo Rocks has yet to win a stakes, but his romp in an allowance optional claimer over course and distance two weeks ago suggests that he has the ability to do so.

This will be easier for Drafted than the G1 Carter in which he was fifth at Aqueduct last month, but he has only won one of his last 14, while this is deep water for Answer In, who generally works the allowance beat and threw in a real clunker last time. Stakes debutant Mr Phil, a barnmate of Chateau, is not a certain runner and would need to find plenty of improvement if he does take his chance.

The outcome of the Tom Fool is the key to this race, and the easy winner OFFICIATING can come out on top again now that he’s had a decent break since his last start.