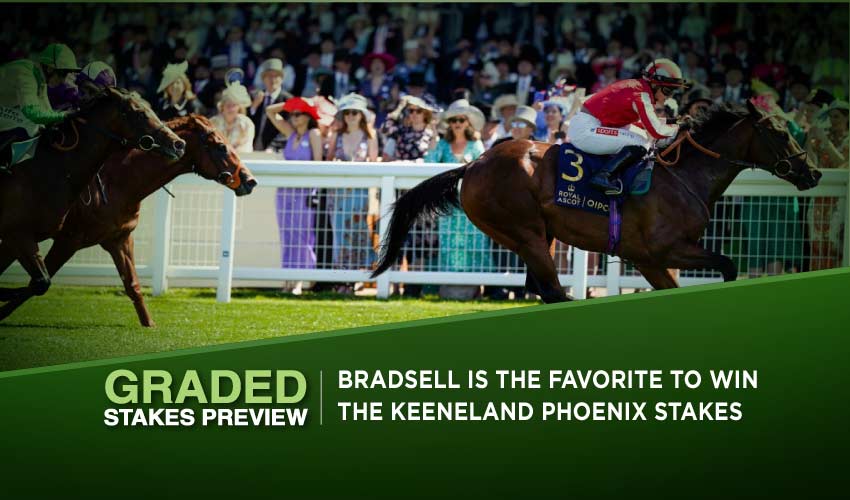 Once again all eyes will be focused on the Curragh this Saturday for a jam-packed day of top racing action. Two races, in particular, should draw plenty of attention, the Group 3 Phoenix Sprint Stakes and Group 1 Keeneland Phoenix Stakes. Here we preview everything you need to know.

At the time of writing, twelve horses are set to take their chance in this year’s Phoenix Sprint Stakes. With a variety of interesting horses on display, this should be one of the races of the day.

Considering his domination of the Irish racing scene, Aidan O’Brien has only won this race once in the last five years. He will be wanting to put that disappointing record right and runs New York City here.

It’s been an up and down season for O’Brien’s charge who has won two of his four races this season. However, he does come into this race with some questionable form following a poor display in the Grade 2 Barberstown Stakes.

The horse who has owned this race in the last few years is Gustavus Weston who has won this race in two of the last three years. Now six, his trainer Joseph Murphy will be hoping that a return to a track he clearly loves will unlock a season-best performance. It’s been a poor season for his charge who has not made the picture in any of his five races this year.

One trainer that has had a miserable record in this race is Kevin Condon. He is looking to set that record straight this season and has three runners in the line-up.

Teresa Mendoza, Quarantine Dreams, and Miss Tucker all have similar profiles. His best chance might lie in Teresa Mendoza.

A winner in Listed company earlier in the year, he backed that performance up with a fourth-place finish in the Group 3 William Hill Summer Stakes. That was his first try in Graded company and the run offered some real promise, he will be hoping for much more here.

The two class horses of the race are a pair of three-year-olds, Go Bears Go and Castle Star.

Go Bears Go is trained in England by David Loughnane and is a serious contender. A winner of the Group 2 Railway Stakes last season, he has run with credit in big Group 1 races. This season has been promising with a Group 3 victory. He is a horse with a big future and will be hoping to cement his class here.

Castle Star heads into the contest with arguably the best form. Another Grade 3 winner, he has hit the crossbar in both Grade 2 and Grade 1 companies. His run in the Juddmonte Middle Park Stakes was a cracker, losing out just on the line. If he can repeat that performance he could be the horse to beat.

Castle Star is a horse that could have a huge future. He was so unlucky not to land a Group 1 prize earlier this year. He should be able to handle this drop-in class in his stride.

Just six horses are lining up to compete for this year’s Phoenix Stakes.

Likely to lead the betting is Blackbeard. A winner of four of his six career starts, he cemented his place as a future star with a dominant win in the Group 2 Darley Prix Robert Papin. He won easily that day and there are high hopes he can take the step up to Group 1 company in his stride.

Little Big Bear has just had four career starts but has started his career with a bang winning his last three starts which included a taking performance in the Group 3 Jebel Ali. Also a winner at this year’s Royal Ascot, he should certainly have a say in proceedings.

Looking to take the Aidan O’Brien pair on will be Apache Outlaw who is trained by Aidan’s son Joseph.

Joseph O’Brien has quickly established himself as one of the premier trainers in the industry and he will be looking to land this race for the first time.

Likely to start as the outsider in the field, it looks like Apache Outlaw has a lot to find and he will have to run a clear career best to stand any chance.

Last year this race was taken by English raider Hugo Palmer, and Archie Watson will be hoping to emulate his countryman this year. In Bradshell he has a live contender.

A winner of his two career starts, he won the Coventry Stakes in a nice fashion and certainly looks a horse going places. This is a huge step in class but he could be a horse capable of anything.

Another English raider comes in the form of Persian Force who is trained by Richard Hannon.  A winner of three of his four career races, he won the Close Brothers July Stakes in dominant fashion. Hannon has spoken positively about his charge and he could play the part of a spoiler here.

Jonny Murtagh won this race three times as a jockey and he will be hoping to repeat the feat as a trainer here. In Shartash, he has a Group 2 winner who can certainly win here.

He beat Blackbird that day and a reaffirmation of that performance could see him in the final reckoning.

This race really could go anywhere and looks to be full of future stars. Persian Force can’t be discounted but this race could come down to the Aidan O’Brien duo Blackbeard and Little Big Bear. Little Big Bear won his Grade 3 in taking fashion and we think he could take the step up in class to Grade 1 level in his stride.