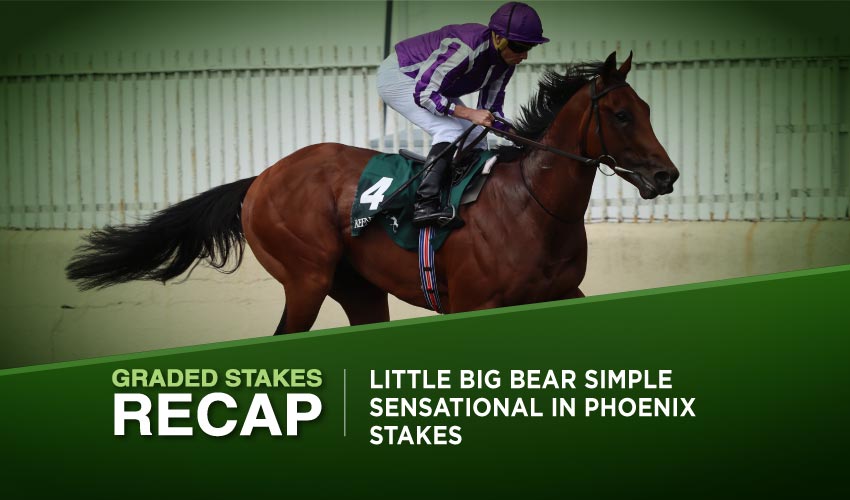 This Saturday at the Curragh saw two races that headlined the racing action across both the UK and Ireland. Here we recap the best of the action from the Group 3 Phoenix Sprint Stakes and Group 1 Phoenix Stakes.

This year’s Rathasker Stud Phoenix Sprint Stakes was rocked by the sudden withdrawal of favorite Castle Star, with the favorite no longer taking his place in the line-up, the race was blown wide open.

With just nine runners left in the field, it was the other classy three-year-old Go Bears Go who started the race as the favorite. A former Grade 2 winner, things haven’t been plain sailing since and following a disappointing showing at this year’s Royal Ascot he certainly had something to prove.

Following the opening of the starting stalls, it was Go Bears Go who broke quickly and it was he who led the horses down to the two-furlong pole. Winding up the fractions gradually, it wasn’t long before Go Bears Go under brilliant jockey Rossa Ryan had all his rivals hard at it.

Ano Syra tried to make headway on the outside, but he always lacked the speed to really threaten.

Sacred Bridge burst out of the pack late, but his charge was too late, and he didn’t have time to reel the long-time leader in.

With another graded win under his belt, David Loughnane, trainer of Go Bears Go is now targeting big races in both France and America before the season ends.

Billed as the two-year-old horse race of the season, this year’s Phoenix Stakes promised to be one of the races of the season. It was widely expected that the Aiden O’Brien-trained Black Beard and Little Big Bear would battle it out for top honors, but Black Beard was declared a non-runner for the race. This left five left going to post.

Dominating almost half of the field were two exciting English raiders, Bradsell and Persian Force. Both are regarded as horses for the future and were expected to give the favorites a real run for their money.

Unfortunately for Bradsell, a slow start put pay to any hopes he had of winning this prestigious race. Giving away several lengths at the start he used far too much petrol at the start of the race to get back in touch with the leaders and could only finish fourth.

Despite many predicting this would be a closely run affair, Little Big Bear announced himself as a horse for the future with a dominating win.

Leading from the off, at the two-furlong pole he found another gear and quickly left his rivals in his wake. Entering the furlong pole full of running, he hit the finish line seven lengths clear of his nearest rivals.

Clearly a superstar of a horse it will be fascinating to see where he ends up next.