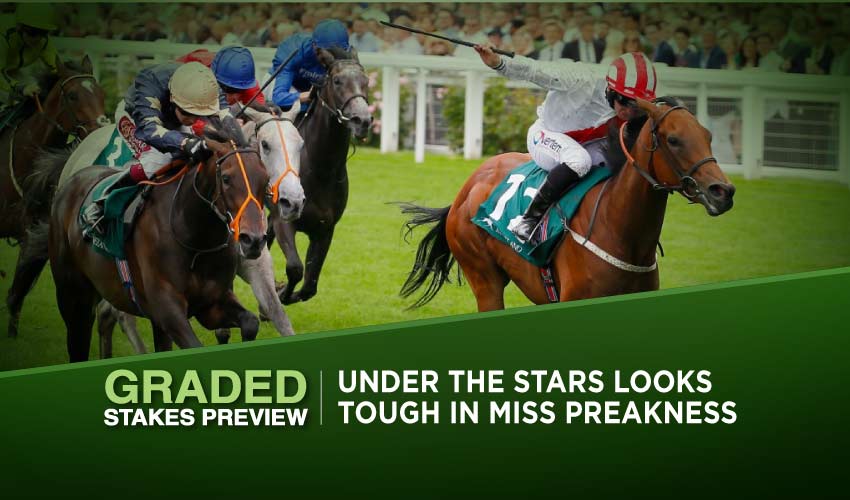 The main event at Pimlico on Friday will be discussed elsewhere, but there is plenty to fire the imagination on the undercard, with the G3 Pimlico Special – featuring First Captain on a retrieval mission – leading the way. Speed is of the essence in the G3 Miss Preakness with Happy Soul and Under The Stars at the forefront, while the G3 Allaire DuPont Distaff is a fascinating contest between a quintet of evenly-matched rivals.

There may be only six runners in the Allaire DuPont Distaff but it’s a hugely competitive contest, with all but one of the hopeful half-dozen holding a major chance.

Two of them met last time out in a mile-eighth stakes at Aqueduct, when experience had the edge over promise as Exotic West, a veteran of 15 races, ran out a game winner with the lightly raced Frost Point four lengths back in third on her stakes debut. It was the culmination of a stellar sequence from Exotic West at the Big A this winter, with three wins from five starts including a blip when she lost her jockey coming out of the gates, and she is ready for the step up into Graded company.

Bill Mott last won this race way back in 1998 with the champion Ajina, and although his Frost Point may not be in the same league as that superstar filly she is a strong contender nevertheless. She was right in the mix at the stretch call but weakened late, and considering the legendary patience shown by both her trainer and owner Godolphin there is every reason to expect continued improvement after just seven starts.

This represents considerable class relief for Super Quick, who was the longshot of the whole field in the G3 Doubledogdare at Keeneland last month but belied those odds with a gutsy effort, stalking the pace before keeping on well for third behind champion Malathaat and high-class Bonny South, beaten only a length and three-quarters. It would be unwise to take that form as gospel, as it remains to be seen whether Super Quick can replicate it in different circumstances, but it is the best on offer here.

It has been 16 months since Into Vanishing last won a race – an allowance optional claimer at Turfway Park – but she has run just four times in the interim, and turned in a fine effort when best of the rest behind champion Letruska in the G3 Royal Delta at Gulfstream Park in February. The effect was slightly spoiled when she could only manage the same position in an allowance optional claimer at Keeneland next time, but the extra sixteenth of a mile today will be to her advantage.

Stakes debutante Lil Kings Princess has run with credit at Oaklawn Park this year, winning a mile-sixteenth allowance and an allowance optional claimer at the same distance before going under by two lengths to G1 winner Maracuja in an identical contest. She brings the speed, she’ll be out there on the front end setting the fractions, and although her main rivals have a class edge she’ll be suited by being able to run her own race.

The longshot Click To Confirm has been placed three times in stakes at Laurel Park – she has never run anywhere else – but has done nothing to suggest she can handle this step up in grade against powerful opposition.

This is a very tight heat with in-form fillies taking on less exposed but promising types, and EXOTIC WEST – unlucky not to be chasing a five-timer – looks ready to bridge the gap to Graded level.

Two fillies who once had Kentucky Oaks ambitions try to reinvent themselves as sprinters in the Miss Preakness, both the big two contenders cutting back substantially in distance.

Wesley Ward’s horses are all about speed, and his Happy Soul was no exception when winning stakes races over five and a half furlongs at Belmont Park last June and over six furlongs at Oaklawn Park in February, when she had three lengths to spare over runner-up Verylittlecents.

She then took a huge rise in class and distance for the G1 Ashland at Keeneland, where she raced prominently before dropping right away to be sixth behind Kentucky Oaks runner-up Nest. It was an experiment that failed, and Happy Soul will be a much happier soul today with class relief back in sprints.

Former Bob Baffert trainee Under The Stars won the G2 Santa Ynez over seven furlongs at Santa Anita on her stakes debut, but was then runner-up in the G3 Santa Ysabel over a mile-sixteenth and a dull fourth in the G2 Santa Anita Oaks at the same distance, providing evidence that speed was more her thing. She is now on her third trainer in as many starts, having joined Sean McCarthy, and reverts to the distance at which she broke her maiden at Los Alamitos.

The two take out most of the pool between them, with Aqueduct six-furlong stakes-winner Lady Scarlet – who had Sweet Solare more than 16 lengths behind in fifth that day – next in line. She’ll appreciate the cutback from seven after trying to go gate-to-wire in the G3 Beaumont at Keeneland before tiring in the closing stages, finishing fourth behind the high-class Matareya.

It’s been seven and a half months since we last saw Saucy Lady T, when she was left toiling in the Belmont dust when fifth behind the future champion juvenile filly Echo Zulu in the G1 Frizette. She had earlier been much closer to the same winner in the seven-furlong + at Saratoga, so the distance could suit although the long layoff is a concern.

Laurel Park maiden winner La Casa D’Oro takes a steep rise in class and is hard to fancy, but Gimmick was impressive when going coast-to-coast in an allowance optional claimer over six furlongs at Oaklawn last month and, although this is much deeper water, could be a draw for exotics players.

HAPPY SOUL had shown blistering speed before failing to cope with a big step up in class and distance last time, and is the choice now back under conditions that will bring out the best in her.

The Pimlico Special is not the race it was in 1938 when Seabiscuit beat War Admiral in their legendary match, nor the race it was when won by Criminal Type, Cigar and Skip Away. Although it remains the pick of the undercard at the Maryland track on Friday there is nothing particularly special about it at all now, which can be seen by the fact that the morning-line favourite for this year’s contest has never even won a stakes.

The horse in question is Vindictive, whose position at the head of the market largely rests on his sole stakes-race performance to date, when third behind Miles D and Speaker’s Corner over a mile-eighth at Aqueduct in November. The runner-up has since won three Graded stakes, notably the G1 Carter, and Vindictive was only three-quarters of a length behind him, and comes here off a competent victory in an allowance optional claimer – also at the Big A – last time out.

Seventh and last in that aforementioned Carter was First Captain, running the worst race of his life. The G3 Dwyer winner needs to bounce back fast but gets first-time blinkers to help and stretches right out from seven furlongs as well, and with just six runs on his record is entitled to find further improvement.

Vindictive’s barnmate Untreated is zero-for-two in Graded stakes and now hooks up again with Forewarned, who got the better of him by a head when they filled out the exacta in a short-field stakes at Aqueduct over a mile-eighth last month. They meet again on the same terms, but the veteran Forewarned has been soundly beaten in the last two runnings of the Pimlico Special – Treasure Trove one place ahead of him 12 months ago – and it would be a surprise if the lightly raced Untreated couldn’t improve past him.

Former Panamanian big-timer Capocostello has fitted in well on two starts in the US, being a staying-on best of the rest behind a wide-margin winner in the G3 Ghostzapper at Gulfstream Park. He’ll need more but there may be more to come and the on-fire Flavien Prat comes in for the mount, so he makes much more appeal than the likes of Mischief Afoot, who hasn’t won for almost exactly a year, and the in-form Excellorator , although that form amounts only to wins in state-bred allowance grade at Laurel Park.

The last five races for Workin On A Dream have all been in stakes company at Laurel, but he hasn’t got his head in front and this is much tougher, as it is for Mohaafeth, also stakes-placed at Laurel and stretching out quite a way today.

This is a weak race for the money, and it might be worth taking a chance that multiple Panamanian G1 winner CAPOCOSTELLO can continue his steady improvement since coming to the US