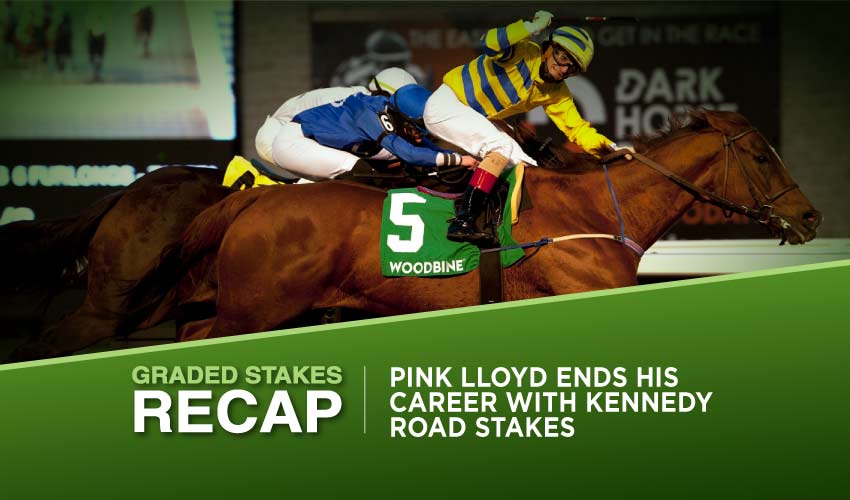 The weekend at Woodbine was dominated by the valedictory triumph of the Canadian superstar Pink Lloyd, who brought down the curtain on a brilliant career in the feature Kennedy Road on Saturday. It was the first of three headline wins for jockey Rafael Hernandez, who combined with trainer Mark Casse on Sunday to win the Mazarine with Mrs Barbara and the Grey with God Of Love.

Farewell to the great Pink Lloyd, and thank you

Like any great entertainer, Pink Lloyd saved the best until last. The old-timer had one more job to do before retirement and he did it to perfection, signing off his magnificent career with victory in the Kennedy Road at Woodbine on Saturday. If only everything in life was as good as Pink Lloyd.

There was pressure, of course. A few days earlier his trainer Robert Tiller had announced that the Kennedy Road would be the nine-year-old gelding’s final race, so it was important to everybody that Pink Lloyd went out on a high. And he did, rising to the occasion like the champion he is, leaving it late, building the excitement, running down his rivals in the last 100 yards to win by half a length, a Hollywood ending for a true racing superstar.

“I think it’s amazing,” said Tiller. “I didn’t think he’d win today. It looked awful tough and the only thing I liked was all the speed in the race, because he loves to run at horses. I was just hoping Rafi [Hernandez] would get room. I said at the head of the lane, ‘You know what? Here he comes’.

“He’s a horse who’s really had a lot of desire and heart. We’re blessed to win this race and it’s a tremendous way to go out. It’s the greatest thrill of my life.”

Add the weights and measures to the rest of the story. Pink Lloyd covered the distance in 1:08 and four-fifths, paid out his legions of supporters at $9.40. Richiesinthehouse beat out Clayton by a neck for the runner-up spot. The favourite Souper Stonehenge was a never-dangerous sixth, but no-one was too concerned about these bits and pieces, for this race was simply all about one horse.

“He can do anything,” said jockey Rafael Hernandez. “He’s the kind of horse you can take back and relax. We had a hole and he was coming, running, always going to give 100 per cent, like all the other times he’s done it.”

All those times. Pink Lloyd’s racing record is a thing of wonder. Entourage Stable’s chestnut son of Old Forester didn’t make his debut until the August of his four-year-old campaign, when he led at every call to win his maiden by a length and a half. That was the first of 38 races, every one at Woodbine, and the first of 29 wins backed up by five seconds and thirds. He’s only been off the board four times in his life, and never finished worse than fifth.

Along the way Pink Lloyd won the Grade 2 Kennedy Road three times, the Grade 3 Vigil four times, the Grade 3 Jacques Cartier four times (twice when it was only a stakes race), and the Grade 3 Bold Venture twice among 26 stakes wins. He has seven Sovereign Awards to his name, including 2017 Horse of the Year and four gongs for champion male sprinter, and there’s likely a couple more to come yet. He’s done it all, won it all, and will now put his feet up at the LongRun Thoroughbred Retirement Society, a happy haven an hour’s drive north of his home at Woodbine.

Some will look at his record, though, and say that Pink Lloyd never left his Woodbine-shaped comfort zone, won no Grade 1s, set no prize-money records, and wonder what all the fuss is about. All right, he’s obviously not the best horse in the world nor the fastest, but there are better ways to measure worth than that.

When Pink Lloyd came back to the winner’s circle for the last time on Saturday afternoon, the crowd rose as one from the cheap seats to the executive suites to give their hero a standing ovation. Everyone knew they were witnessing the best of thoroughbred racing, something rare and beautiful and utterly heartwarming, the true spirit of the sport that’s worth much more than a hatful of Grade 1s or a bank vault of prize-money.

Barbara helps Hernandez to a treble

Rafael Hernandez dominated the Graded stakes action over the weekend, with his score aboard Pink Lloyd the first of a treble continued by Mrs Barbara in the Mazarine.

The Bodemeister filly, trained by Mark Casse and the 9-2 second-favourite, took over from the front-running Chocolateaddiction at the eighth pole and then turned back the late challenge of rail runner and hot favourite Moira to win by half a length, stopping the clock in 1:44 and three-fifths. The longshot Guileful was a length away in third.

Mrs Barbara, fourth in the Grade 1 Natalma before breaking her maiden last time out, is now two-for-six and runs for the Spruce Stable of Woodbine CEO Jim Lawson, who named her after his mother.

Half an hour later, Hernandez completed his Graded-stakes treble and Casse notched a double when God Of Love ran out an impressive winner of the Grey, the colts’ equivalent of the Mazarine.

God Of Love’s task was made easier by the scratch of morning-line favourite The Minkster, who had beaten him in a stakes over course and distance last time, but the 9-2 third-choice made it look quite easy anyway.

Waited with until making quick ground on the turn, God Of Love joined battle six wide through the stretch before hitting the front at the sixteenth pole, then keeping on strongly to beat Ironstone by a length and a half in a time of 1:44 and one-fifth. On Thin Ice was third, another length and a half away.

Sign up and get a 10% rebate. Make sure to stay tuned for the latest Horse Racing Odds, race results and racing entries at Horse Racing Tote.

Follow us on Social Media for instant Pink Lloyd updates!