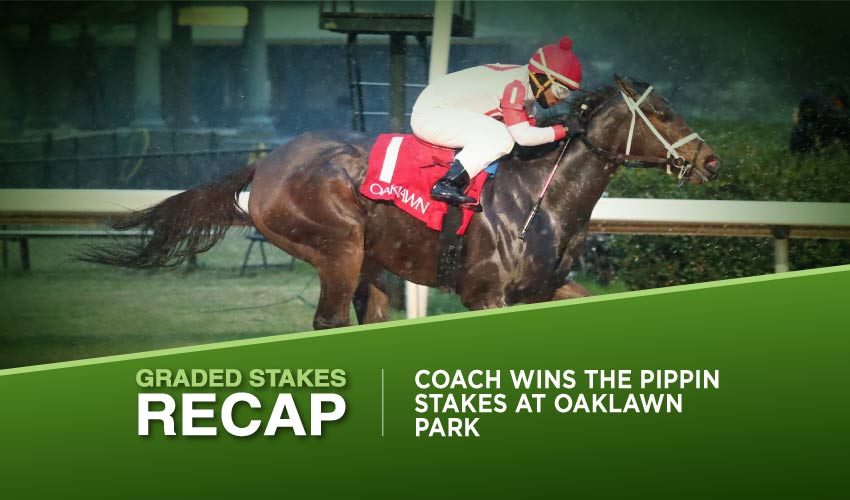 Saturday’s horse racing in the US offered several attractive cards, featuring some Grade races, including the Tropical Turf Stakes held at the Gulfstream Park. However, favourite Largent didn’t show anything remarkable here as Clear Vision cruised for an effortless victory. The Oaklawn Park then saw four-year-old filly Coach fending off Miss Bigly in the Pippin Stakes.

The card at Gulfstream Park offered the G2 turf race open to a four-year-old and older horse who clashed at the distance of a mile. The purse of $100,000 attracted seven participants, including the G1 Pegasus World Cup Turf runner-up Largent (7-10), who didn’t meet expectations here at all.

This year’s Tropical Turf Stakes utterly belonged to Clear Vision (107-10), trained by Matthew O’Connor, who made every single yard of the event. The six-year-old gelding used his early speed and a convenient starting gate to hit the front at the beginning, and saving ground at the fence, he led the field throughout the whole race, even into the final stretch where he left Belgrano (49-1) quickly behind. Winning his very first Graded race in 19 starts, Clear Vision crossed the wire in 1m 35.36s after nobody really threatened him in the closing stage. The son of Artie Schiller was piloted by Julien Leparoux and scored by two lengths in front of Value Proposition (2-1), whose finish was eye-catching yet couldn’t possibly acquire more than the second place ahead weakening Belgrano.

For the first time in his quite promising career, six-year-old Largent didn’t finish in the first two. After a long hiatus, the Todd Pletcher trainee was expected to deliver another fine effort, given he is aimed at the Pegasus World Cup Turf once again; still, he didn’t show anything remarkable on Saturday. He was, of course, urged to close on the leaders in the final stretch, yet his action was sort of cumbersome and stiff, resulting only in fourth place. Once a consistent Grade performer, Phat Man (16-1) didn’t shine here as well, finishing last of all.

The purse of $150,000 attracted a field of seven four-year-old fillies and older mares who covered the distance of a mile in the Pippin Stakes.

On the sloppy dirt surface, favourite Coach (3-5) showed some early speed to settle at the front from the start, and being the one who competed even among the elite of three-year-old fillies in 2021; she expected to cruise for the victory here. Still, it wasn’t as straightforward for the Brad Cox trained daughter of Commissioner as Coach remained leading the pack until the final turn; however, her most serious rival, Miss Bigly (4-5), joined her back then, undertaking the more convenient track at the fence, and looked ready to fight for the victory here.

However, when the contestants arrived at the final stretch, Miss Bigly had nothing more to offer, while Coach enjoyed the moment when she wasn’t leading to catch her breath and powerfully rally forward subsequently. Ricardo Santana jr. sent her back to the first place, upon which Coach easily scored the race in 1:37.58 with the advantage of three lengths to second Miss Bigly. Without threatening the mentioned duo, W W Fitzy (42-5) grabbed third.

Follow us on Social Media for Pippin Stakes updates!