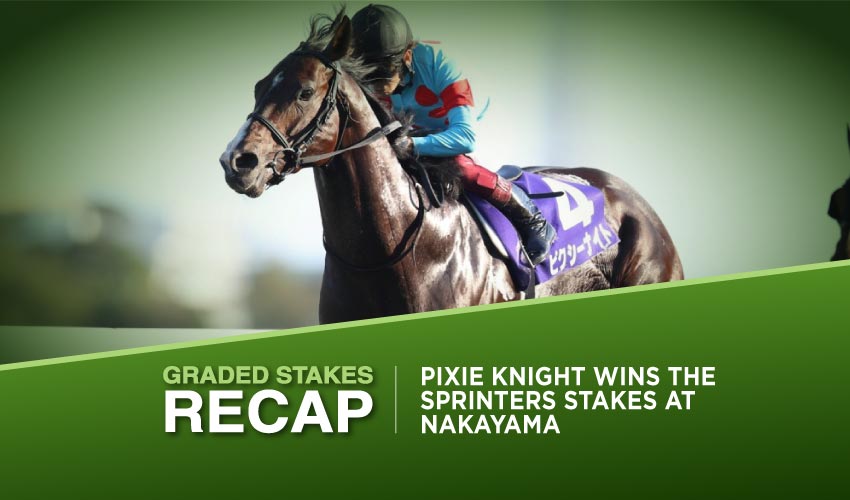 The seventh leg of the Global Sprint Challenge was held at the Nakayama Racecourse, Japan, on Sunday, and even though the preferred horse Danon Smash couldn’t get past the sixth place on his first run since spring, the winner wasn’t a shocking one. Pixie Knight has seemed like a G1 scored in the making, which he justified in the Sprinters Stakes by winning easily over second Resistencia. The eighth part of the series – the VRC Sprint Classic – will be held at the Flemington Racecourse, Australia, in November.

The prestigious sprint held at the distance of 6 furlongs could’ve been the place six-year-old Danon Smash (8-5) would return to winning ways as he was definitely the most successful horse at the G1 level from all the participants. However, most of the purse of 252,860,000 Yen belonged to the connections of one of his rivals – Pixie Knight (43-10). The Hidetaka Otonashi trained bay was the only three-year-old in the field of 16 sprinters. Still, his victory was far from surprising, given he’s been demonstrating his great potential since the beginning of his career, he was a tad unlucky last time out, though, as he failed to win a G2 race just by a neck. Four-year-old Resistencia (12-5) was better back then, while the three mentioned horses were the ones primed to win the Sprinters Stakes, yet the finish wasn’t much of a thrilling one for the winner.

Pixie Knight settled in third, and once the field turned home, Yuichi Fukunaga helped him to make some space, and then urged him forward. The first G1 winner sired by Maurice picked it, cruised to the first place, and easily scored by 2 lengths in 1m 7.10s. By this victory, Pixie Knight creped among the Japanese sprinter elite, but another clash with Resistencia seems quite necessary.

The Takeshi Matsushita bound filly bagged her only G1 victory as a two-year-old, upon which she proved to be a great three-year-old; however, she had to wait for another success until 2021. She scored a G3 victory in February and finished a close second to Danon Smash in the G1 Takamatsunomiya Stakes, so after she won a G2 in front of Pixie Knight last time out, she was raring to add another huge prize to her record. Christophe Lemaire aboard was about to land a hattrick in the Sprinter Stakes, but everything went wrong for him and Resistencia as they got hold up in the final stretch. Before the filly could unfold her finish, Pixie Knight was charging for the victory, so she had to settle for second. Still, she showed a good turn of foot, and she should pose a serious threat not only to Pixie Knight in her next outings.

Shivaji (47-1) denied the odds and ran a huge ran in third, while Miekei Yell (239-10) was fourth and Mozu Superflare (143-10), who lead the pack since the start, finished fifth by a nose. Mentioned Danon Smash lacked the aura of a champion on Sunday and took sixth place, but as it was his first start after a hiatus, he should benefit from the run for his following exploits.

Follow us on Social Media for instant Pixie Knight updates!