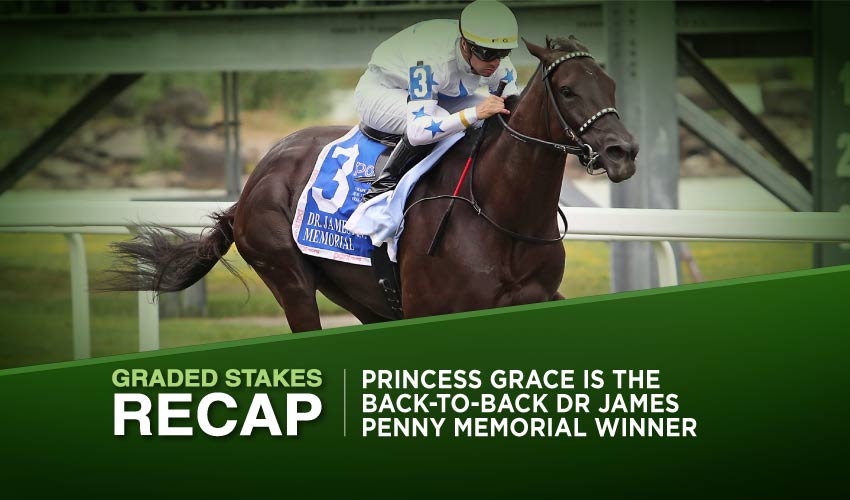 On Tuesday, the Parx Racing offered an interesting feat in the G3 Dr James Penny Memorial Stakes, where Princess Grace successfully attempted to score the turf event for the second time in a row. Piloted by Florent Geroux, the double G2 victress delivered a solid performance and became the very first back-to-back winner of the event when leaving Flirting Bridge behind in second.

The G3 turf event attracted a field of eight three-year-old and older fillies and mares who competed for the purse of $200,000. Covering the distance of a mile and a half of a furlong, Princess Grace (17-10) set the pace after breaking quickly from the gate and under Florent Geroux; she didn’t allow anybody to better her at any stage.

Throughout the whole race, the five-year-old mare was bursting with energy, so when the jockey unleashed her in the final stretch, Princess Grace smoothly gained an advantage over her rivals to score by three lengths in 1m 43.70s. By achieving this race, the Michael Stidham bound bay surpassed the milestone of $1,000,000 earnings. Flirting Bridge (6-4) had to settle for second place, leaving brave Love In The Air (47-10) in third.

The victorious daughter of Karakontie has always boasted lots of talent, while her team left her quite unexposed as up to this date and Princess Grace has hit the track only eleven times. Since 2022, the bay bagged two G2 wins and three triumphs at the G3 stage, including two wins in the Dr James Penny Memorial, as she became a back-to-back winner of the race.

Although her seasonal debut resulted in the worst result of the mare’s career, she bounced back on Tuesday, while her performance was just one of a mare whose class was above the rest of the field.

Still, Princess Grace didn’t start off as a favorite as Flirting Bridge snatched up the role upon her fine Allowance success. She travelled well and tried to close on her rival in the final stretch; however, Princess Grace was just way too distant from her, so Brendan Walsh’s charge had to settle for second.

Nevertheless, she looks like a Graded winner in the making. Love In The Air secured third place after striving to get past the victress in the final turn but failing to do so completely. Runaway Rumour (204-10) ran in fourth in front of fifth Tic Tic Tic Boom (38-1).