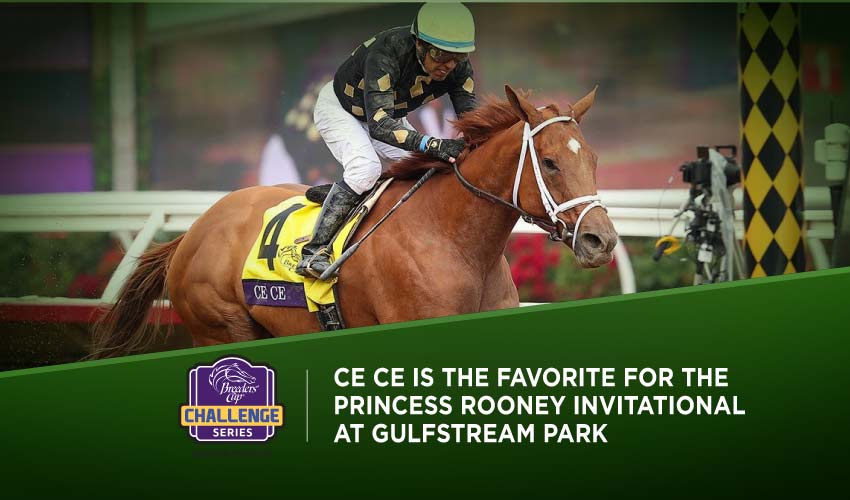 Today there is top racing action at Gulfstream Park which is headlined by the Princess Rooney Invitational and Smile Sprint.

The Princess Rooney takes on added significance as the winner of that race will gain direct entry into the Breeders’ Cup Filly & Mare Sprint – a race Ce Ce won last year and will be hoping to do so again.

At the time of writing six horses are due to head to post for this year’s Princess Rooney Invitational Stakes. The class horse of the race is Ce Ce who won this race last year and went onto win the Filly & Mare Sprint at last year’s Breeders’ Cup. Looking to defend her title,  a win in this race will see her gain entry into the Breeders’ Cup showpiece later this year.

A tactical horse, Ce Ce can be ridden a variety of ways, but jockey Victor Ezpinoza will be hoping to sit off the early pace before making his move as they turn for home.

Sandwiched in between these wins was a defeat in the Grade 1 Apple Blossom, in which Ce Ce lost out to the mightily impressive Letruska. There are no Letruska’s in this field and Ce Ce really should take all of the beating as she gears up for the bigger challenges to come.

Looking to take the prized scalp of Ce Ce will be Spirit Win. Heading into the race off the back of three consecutive wins, Spirit Win will look to dictate off the front and hope there is still gas in the tank when they turn for home. This will represent a huge step up in class, and she will be racing against older horses but at a decent price she could be a nice alternative to the favourite.

Allworthy trained by Saffie Joseph is another who will enter this race at a fairly big price. A frustrating horse to follow, Allworthy seemed to appreciate the drop back in trip on her last run. Given a soft time of things out in front she has more on her plate here, but if the race falls right she is more than capable of providing a shock.

The main danger to Ce Ce could well come in the form of Glass Ceiling. A double Grade 3 winner, she struggled in her last Grade 2 race only being able to finish third of four but she did run into trouble which did impact her ability to finish. Granted a better run of things she could really serve it up to the favourite.

Corey will be a long shot on the day and only once has she raced in graded company. Finishing out of the places on that occasion you have to think she has another tough job on her hands here.

The final horse in the race is Make Mischief who is dropping back in distance and is another taking a step up in class. Trained by the excellent Mark Casse, Make Mischief could be a viable option as she should have the stamina to really compete. A question mark over how much speed she has is right to be asked, but she could be a live contender here.

Ce Ce will be short enough in the betting but should have the class to win this race for the second year in a row. The main challenge and unknown horse in the race is Make Mischief and if she can handle the rise in class and drop in distance she could be the main danger to our selection.

One of the speediest races on the card, six horses will go to post for this year’s edition of the Smile Stakes. It’s an important race as the winner of the Smile will get $30,000 off the entry fee for the Breeders’ Cup Sprint which will be held later in the year.

In a tight looking field the betting is currently led by the Saffie Joseph trained Drain the Clock. A previous Grade 1 winner, this will be Drain the Clock’s first run back in the States following his seventh placed finish in the Golden Shaheen which was run in Dubai.

Looking to get back to winning ways, it’s a bit of an unknown as to how the travelling would have set him back, but Joseph is confident that her charge will be able to bounce back to his best. An easy traveller, he will look to charge out of the gate and dictate the fractions. If Drain the Clock can get an easy time of it out in front, he could be hard to pull back.

Willy Boi will most likely go off as the second favorite and it’s easy to see why – as he has won his last two races by a combined margin of thirteen lengths. Willy Boi has run in this race before and could only finish fourth. He will be desperate to put that record straight here.

Behind the top two in the betting is the wonderfully named Absolute Grit and is one of two runners in the race for trainer Rohan Crichton. Recently claimed for $20,000 following a romp in the Miami Shores, Absolute Grit is taking a big jump in class but knows this track well and could be a danger if Drain the Clock doesn’t show up.

The second Crichton horse is Yes I’m A Beast. A horse used to winning, Yes I’m A Beast has won five of his seven starts but this will be his toughest assignment by far.

Placed behind the top three in the betting is Pudding. This looks a tough spot for Pudding who will have to produce a career best if he is to overturn the tables on Absolute Grit who beat him pretty comfortably last time out in the Miami Shores.

Rounding out the field is Gatsby who was a winner last time out in the Sunshine Sprint. Another horse who is taking a step up in trip, he will need to produce a lifetime best to come out on top here.

With many horses taking a step up in class the smart pick has to be on Drain the Clock. A Grade one winner, he is highly tried and should have too much class for this field.

Follow us on Social Media for Princess Rooney Invitational updates!