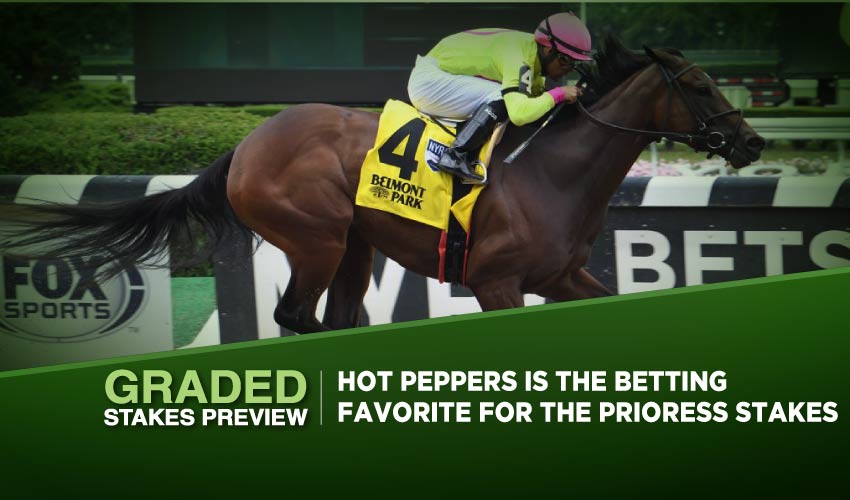 The programme at the Saratoga Race Course continues on Friday with the G2 Prioress Stakes for three-year-old fillies. G1-placed Hot Peppers is set to a drop in the distance and also class and could bag her second Graded triumph here. The field is quite competitive, though, and prone to witness an upset.

The purse of $250,000 attracted a field of ten three-year-old fillies who will cover the distance of six furlongs. On the dirt surface, Hot Peppers will attempt to record her second Graded victory as the Rudy Rodriguez bound filly triumphed in the G3 Victory Ride Stakes in July. Back then, she achieved her fifth win out of eight outings as she didn’t succeed only in her debut, premiere at the black-type scene, and last time out, when she finished second in the G1 Test Stakes at Saratoga.

The daughter of Khozan relies on her quick start, upon which she sets the pace and usually is able to withstand it. Although she was defeated in that G1 event over seven furlongs, she still left preferred Matareya behind. Steven Asmussen sends in Wicked Halo by Gun Runner. The grey filly has eight starts under her belt, too, while she bagged her first Graded victory in 2021 when scoring the G2 Adirondack Stakes.

In 2022, she most notably placed third in the G2 Eight Belles Stakes behind mentioned Matareya, plus she won two black-type races quite easily. She should handle the distance well, but she might actually prefer a slightly longer trip.

Lady Scarlet is another participant to consider, given she triumphed in the G3 Miss Preakness Stakes in May. She’s also scored a black-type over six furlongs, and unlike some of her rivals, this Michael Maker bound bay should really benefit from the trip. Half Is Enough was unbeaten until July, when she delivered a solid effort in the G3 Victory Ride Stakes, getting bettered only by Hot Peppers.

However, her most recent run resulted only in seventh place at the Listed stage; therefore, there are fillies whose resumes might currently look more appealing, including a couple of Allowance victresses. Brad Cox relies on Angitude, a black-type placed bay, while John Terranova II sends in Union Lake.

Although some of her rivals could enjoy the six furlong-trip better, our pick for the Prioress Stakes is Hot Peppers, as she placed at the G1 scene and looks to be in form. Angitude could be the second best.

Follow us on Social Media for more Prioress Stakes updates!