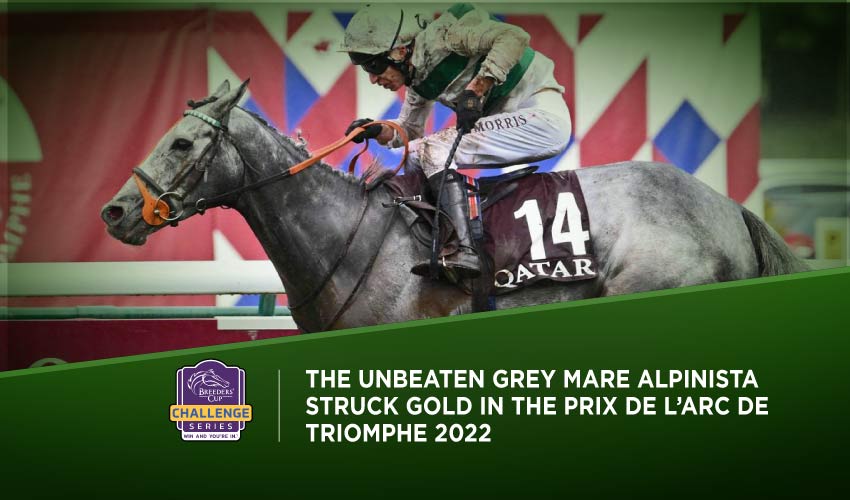 The first race of the anticipated card was open to two-year-olds who clashed over the distance of seven furlongs. The purse of €400,000 lured in eight colts; however, the very soft ground persuaded Aidan O’Brien to scratch his favorite The Antarctic, so only seven participants headed into this G1 turf race, where Belbek (177-10) caused an upset.

The Andre Fabre bound colt travelled in the pack, and his jockey, Mickael Barzalona, waited patiently until the final two furlongs. Then, he took the colt outside, urged him to close on the already leading Gamestop (12-1), and Belbek willingly rallied. He had to fight for the win but in the end, he scored the race in 1m 22.98s, leaving Gamestop in second by a neck. Breizh Sky (19-5) was third, again only by a neck.

The victorious son of Showcasing caught the attention in spring as Belbek won his second start, upon which he achieved his premiere Graded win in a G3 over six furlongs. However, he wasn’t able to draw on that performance in his following couple of Graded outings, therefore, he belonged almost among the outsiders here.

He was thriving on the very soft ground, though, and once he was asked for more, he delivered enthusiastically. Belbek, who earned a free entry for the Breeders’ Cup Juvenile Turf, bettered Gamestop, who might’ve hit the front too early as his finish was brilliant, yet he was a bit weakening in the closing stages, while third Breizh Sky also came very close to him. Without The Antarctic, Shartash (2-1), a G2 winner, took the role of a favourite, yet his finish came too late to threaten the first trio and he had to settle for fourth place.

Two-year-old fillies lined up for this G1 turf race over a mile and vied for the purse of €400,000. The twelve of them had to face the very soft ground, while Blue Rose Cen (47-10) smoothly handled it the best. The Christopher Head bound bay always galloped close to the front, and once Aurelien Lemaitre sent her to the gap at the fence, she immediately picked up.

In the final stretch, Blue Rose Cen displayed such a breath-taking turn-of-foot that none of her rivals could match her, so the bay only extended her lead to the final five lengths. The daughter of Churchill scored the race 1m 40.45s, well ahead of second Gan Teorainn (50-1) and third Never Ending Story (67-10).

Blue Rose Cen entered the Prix Marcel Boussac with five starts under her belt. Breaking her maiden at the second attempt, she went on to win easily another smaller race before placing second in a Listed. Subsequently, she delivered among the G3 competition and therefore belonged among chancy fillies on Sunday; however, probably nobody expected Blue Rose Cen to totally destroy the competition and earn a berth in the Breeders’ Cup Juvenile Fillies Turf so effortlessly.

Behind the French participant, Gan Teorainn took second place also thanks to being pointed into the gap at the fence. The Jim Bolger trained filly wasn’t able to place at the G1 and G2 in Ireland as she gave her best when finishing second in the G3 Weld Park Stakes. Still, on Sunday, she was surprisingly good and denied second place Never Ending Story.

The Aidan O’Brien filly settled in midfield and was a bit unlucky in the final stretch as she couldn’t find a gap to rally forward. Still, she definitely gave a better effort than the preferred rivals, including favorite Kelina (21-10), who was last of all.

The purse of €5,000,000 attracted a full field of 20 three-year-old and older horses who clashed over the distance of a mile and a half. The richest European turf race lured in some exciting participants, including Classic winners and stars from Japan and Germany; however, it was British raider Alpinista (33-10) who handled the very soft ground and persistent rain the best.

The Mark Prescott bound five-year-old travelled in fifth, and once the field hit the final stretch, Luke Morris aboard was only showing his mount the way and didn’t move until Vadeni (78-10) came closer. As soon as he urged Alpinista to keep the lead, the grey mare did so, and subsequently resisted not only Vadeni but also Torquator Tasso (81-10), finishing on the outside. Alpinista won by half a length in 2m 35.71s, leaving Vadeni in second and last year’s victor Torquator Tasso in third.

The United Kingdom bred Alpinista is the first Frankel’s offspring to score the Prix de l’Arc de Triomphe; still, Hurricane Lane was quite close in 2021. With her Sunday victory, the grey mare is unbeaten in the last two seasons, and her journey is quite a fairy tale one. She commenced the past season as a Listed winner, then she bagged a G2 in Haydock, upon which she made herself at home in Germany, where she prevailed in three G1s.

In 2022, she transferred her outstanding form to France as she scored the G1 Grand Prix de Saint-Cloud, and she also shined in the United Kingdom with her great performance in the G1 Yorkshire Oaks. On Sunday, she crowned her brilliant career, and even though she also earned a berth in the Breeders’ Cup Turf, her trainer expects Alpinista to opt for the Japan Cup instead of the US.

Three-year-old Vadeni delivered a heroic effort in the Arc as the Jean-Claude Rouget bound bay definitely isn’t a fan of the very soft ground. Still, his class and determination helped him to overcome the peril as he galloped in the midfield and rallied forward in the final stretch. He was closing on Alpinista with every stride; however, the victorious mare simply dug deep and denied Vadeni a triumph.

The son of Churchill has enjoyed a great season regardless of this defeat, given he won the G1 Grand Prix du Jockey Club and the G1 Coral-Eclipse. Moreover, he affirmed to be suited even to longer distances on Sunday. The last year’s winner Torquator Tasso once again finished from the rear of the field. Although the Marcel Weiss five-year-old didn’t repeat his victory, he gave a solid effort when flying home to snatch up third place after a season that didn’t unfold into his favour.

Al Hakeem (20-1) always galloped close to the front and kept fourth place in the final stretch, while the only other horse showing a decent turn-of-foot, was six-year-old Grand Glory (54-1), who finished late to take fifth place.

The Irish Derby victor Westover (10-1) came home in sixth, former favourite Luxembourg (49-10) was seventh, and the most anticipated Japanese participant, the front-runner Titleholder (9-1), weakened in the final part of the race and had to settle for eleventh place.

This G1 turf race had its hot favourite in Nashwa (6-4), who looked ready to bag another big one here. The purse of €500,000 lured in sixteen three-year-old and older fillies and mares who covered the distance of a mile and a quarter, which should’ve suited Nashwa, and it almost did. Hollie Doyle aboard allowed the filly to get into a nice rhythm after the start, upon which the bay seized the top and set the pace.

In the final stretch, she remained at the front, kept resisting her rivals, and she seemed capable of maintaining a lead until the very end, however, Place Du Carrousel (41-1) was suddenly looming large on the outside. Nashwa couldn’t even react to her finish and was defeated by ¾ of a length. Place du Carrousel crossed the wire in 2m 12.64s, shortly followed by Nashwa and third Above the Curve (19-5).

Andre Fabre celebrated his second big one on Sunday thanks to Place Du Carrousel, who entered the Prix de l’Opera as one of the outsiders. The Lope de Vega filly has displayed some solid talent since her 2021 debut, while in the ongoing season, she bagged a small race, then succeeded at the G3 stage, and finished second in the G1 Prix Saint-Alary behind Above The Curve. Place Du Carrousel utterly failed to make a good impression in the G1 Prix de Diane, though, where she was tenth, losing to many of her Sunday’s rivals.

Still, she simply loved the very soft ground, and recorded her premiere G1 victory here, bettering brilliantly going favourite for the first time and getting a free entry for the Breeders’ Cup Fillies & Mare Turf. The John & Thady Gosden Nashwa triumphed in the G1 Nassau Stakes last time out and affirmed her form also on Sunday, with Above The Curve delivering her standard when finishing in third.

After 44 years, The Platinum Queen (7-5) was the first two-year-old to score this G1 turf race over five furlongs. This €350,000 event is open to two-year-old and older horses, and currently, only two juniors have scored it – Sigy in 1978 and the mentioned filly in 2022.

The Platinum Queen quickly jumped out of the gate, settled in front, and under Hollie Doyle, she didn’t allow any of her rivals to pass her by. From the beginning, she was determined to prevail and dug deep to keep finishing opponents at bay, which she did in 58.65s. The Richard Fahey trained junior won by a short neck in front of brilliantly going outsider White Lavender (30-1), with Coeur de Pierre (6-1) taking third.

The Platinum Queen is a real two-year-old star. The daughter of Cotai Glory has recorded seven starts and even though the premiere attempt at the Graded stage didn’t go well, she soon enough drew on her fine debut victory and triumphed in a novice race, and then Class 2 at Goodwood. Subsequently, The Platinum Queen faced the elite of three-year-old and older sprinters in the G1 Nunthorpe Stakes, where she gave a brave effort and finished second behind Highfield Princess.

Before heading to France, she achieved second place at the G2 level, and on Sunday, she was writing the history. White Lavender and Coeur de Pierre ran great races; however, this year’s edition of the Prix de l’Abbaye was only about the two-year-old heroine – The Platinum Queen.

Ten three-year-old and older horses hit the seven furlongs-long distance of this G1 turf race, offering the purse of €350,000 and a berth in the Breeders’ Cup Mile. Although he has never shined among the elite, Kinross (17-10) seemed to be in such a form he was preferred to score his premiere G1 victory on Sunday, and he did so impressively.

The five-year-old gelding travelled close to the front and Frankie Dettori waited patiently until the final two furlongs to unleash his mount. Once he asked Kinross questions, the Ralph Beckett bound bay rallied forward on the outside and comfortably seized the front. He crossed the wire in 1m 24.40s, winning the race by two lengths before Malavath (16-1) and Entscheiden (35-1).

Of seven G1 attempts, Kinross’s best result was fourth place in last year’s Prix de la Foret. However, the son of Kingman added two G2 victories to his resume during this season and given his form looked rock-solid, his team had high hopes also for this year’s tilt at the Prix de la Foret.

Finally, Kinross broke his duck among the elite and bagged the race impressively as none of his rivals could close on him dangerously. Second Malavath was utterly no match to him, while Japanese Entscheiden gave a surprisingly great effort by taking third place.