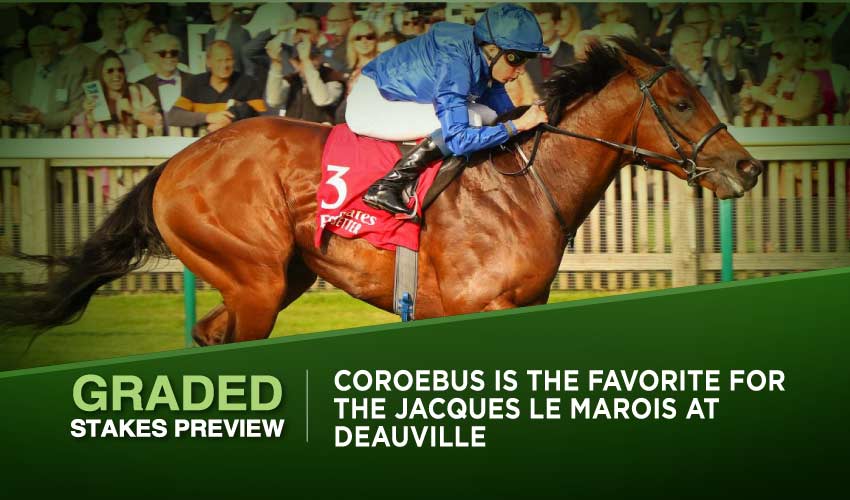 Two treasured Graded races are to be held in France during the following days, while the G1 Jacques le Marois headlines Sunday’s card at Deauville. The winner of the British 2000 Guineas Coroebus will face a brilliant filly Inspiral and some solid older horses, for example, Order of Australia. On Monday, the Deauville Race Course will witness the G2 Prix Guillaume d’Ornano with several interesting three-year-olds.

The pinnacle of Sunday’s card is open to three-year-old and older horses; however, it looks that the three-year-olds are way stronger here and should seize most of the purse of €1,000,000. On the turf surface, Coroebus is the favourite as he excels at the distance of a mile.

The son of Dubawi showed lots of talent in 2021, upon which he commenced the new season with a bang in the 2000 Guineas for Charlie Appleby and Godolphin. Although he faced serious traffic trouble in the G1 St James’s Palace Stakes at the Royal Ascot, he managed to prevail by a head, affirming not only to be an outstanding colt but also to be very gutsy and determined to win.

On Sunday, he might need this trait as his rivals boast high class, too. Especially John and Thady Gosden bound Inspiral, who concluded her junior campaign unbeaten, scoring also the G1 Fillies’ Mile. Due to a setback, she returned to the tracks in the middle of June to bag the G1 Coronation Stakes easily; however, her subsequent outing resulted in her very first defeat.

Back then, Inspiral didn’t look as fresh as usual and had to settle for second place in the G1 Falmouth Stakes. It is quite possible that the race came too soon after her seasonal premiere, and therefore, she’s expected to succeed in the rematch with Prosperous Voyage who bettered her in the Falmouth Stakes by one and ¾ of a length.

The Ralph Beckett trained bay was a reliable two-year-old, also securing second place in the Fillies Stakes, while she started the season of 2022 with second place in a Classic trial. She failed to keep up with the best in the 1000 Guineas, but last time out, she was just superb and needed to be considered once again.

Regarding three-year-olds, Light Infantry is the last to mention due to his solid second place in the G1 Prix Jean Prat, where he lost only to Tenebrism, who subsequently confirmed regaining her form when finishing second in the G1 Prix Rothschild.

In other words, Light Infantry is a G3 winner with a strong chance to place in the Prix Jacques le Marois. In terms of older participants, Order of Australia took third place here in 2021, and when the race suits him, he’s capable of catching preferred rivals off guard. Still, State of Rest looks more appealing thanks to his G1 Prince of Wales’s Stakes victory, which was his fourth out of his recent five G1 outings.

Coroebus, who should be well rested after his Royal Ascot triumph; still, he’s seriously putting his class on the line here. Both Inspiral and State of Rest could be threats to him, though.

Six three-year-olds will line up in this G2 turf race over a mile and a quarter. On Monday, the contestants will vie for the purse of €400,000, while the field comprises one British raider – Missed the Cut.

The George Boughey bound bay has four outings under the belt and three of them victorious. The son of Quality Road finished fourth in his debut but then destroyed the competition of a novice race, easily bagged another one and last time out, Missed the Cut stormed home in the Class 2 handicap in Ascot.

Despite carrying one of the biggest weights, the colts showed off his ability once again, while on Sunday, he could achieve his premiere Graded win as scoring at the Royal Ascot resonates quite strongly.

In terms of the locals, three of them could actually be better than the British colt. Junko won two smaller races when facing very decent horses at the beginning of the season but then was gelded and the road for the Classic glory closed for him.

Therefore, he aimed at the G3 Prix Noailles at Longchamp, where he prevailed narrowly, upon which the Andre Fabre trained bay finished third in the G2 Prix Eugene Adam over a mile and a quarter. Back then, the son of Intello was defeated by smart My Prospero and held off his Vagalame, who might prefer a slightly shorter distance. Still, the Carlos Laffon-Parias trained colt is respected due to his fifth place in the G1 Prix du Jockey Club.

Al Hakeem completes the trio of smart performers here as upon winning a small race at Chantilly, Jean-Claude Rouget’s trainee gave a superb effort at the Listed stage in May. Over the distance of a mile and a quarter, Al Hakeem bagged the win impressively by fourth lengths and was a viable chance for the G1 Prix du Jockey Club, where he settled for fourth place, not far away from fifth Vagalame.

True Testament has shown some talent, too, as he took second place at the G3 level behind a Classic runner-up El Bodegon, upon which he succeeded in two smaller races. He might be good enough to play a role here, unlike Haurun, who isn’t expected to impact the race much.

Missed the Cut, who should continue his progress here even though he faces some smart opponents.

Odds will be updated soon