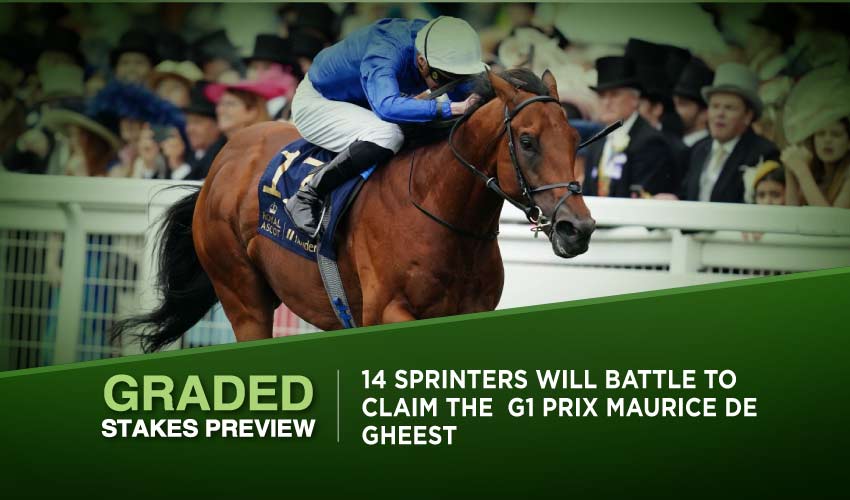 Two treasured races are about to be held in Europe on Sunday. At first, three-year-old and older sprinters aim at Deauville, France, to clash in the G1 Prix Maurice de Gheest. Godolphin bound Naval Crown will attempt to record another G1 victory in 2022, as after taking the Platinum Jubilee Stakes at the Royal Ascot, he’s the favorite to strike gold here, as well.

Australian star Artorious might be against it, though. The Düsseldorf Race Course then offers the G1 German Oaks for three-year-old fillies where the locals are about to face the Aidan O’Brien trained Toy, second in the Irish Oaks last time out.

The prestigious turf feat open to three-year-old and older horses is run at the distance of six and a half furlongs while offering the purse of €380,000. In the field of fourteen sprinters, Naval Crown is one of the victory candidates. The four-year-old colt looked interesting as a two-year-old, and even though he bagged only a Listed win in 2021, Naval Crown placed at the G3 level and earned some money among the absolute elite.

The son of Dubawi commenced the new season in Dubai as the Charlie Appleby bound bay scored his first G2 victory in Al Fahidi Fort, upon which he ran in fourth in the G1 Al Quoz Sprint. His return to British soil resulted in a tight success in the G1 Platinum Jubilee Stakes, into which he started off as an outsider but was more considered for the G1 July Cup Stakes.

Back then, he ran in second and affirmed his position among the very best sprinters in the United Kingdom. Naval Crown recorded his most recent outings on the firmer ground, which isn’t something to be expected in France, but he should be capable of handling even softer surfaces. Minzaal was perceived as a lively chance in the Platinum Jubilee Stakes, but he failed to impress back then. Still, he gave a solid effort in the G3 Hackwood Stakes last time out and he’s usually a consistent performer trained by Owen Burrows that needs to be respected here.

Regarding other than British raiders, Artorius represents Australia as he bravely did both in the Platinum Jubilee Stakes and July Cup Stakes. The four-year-old bay travelled to the UK with a G1 victory under his belt and an aura of a smart sprinter.

He was quick to show off his ability as he bagged third places in the mentioned events, yet it’s possible he’s about to hit the softest ground he’s ever run on. Still, Artorius could also be a victory candidate. Perfect Power is another British guest whose results don’t hint he’s not the most consistent horse around, but he’s quite a talented one.

The Richard Fahey bound bay won two G1s as a two-year-old and started the new season with a bang in a Classic trial, upon which he failed to handle the trip of a mile in the 1000 Guineas. Subsequently, Perfect Power thrived in the G1 Commonwealth Cup among sprinters but couldn’t draw on that performance in the G1 July Cup Stakes, finishing only seventh. The field might’ve been too fierce for him, a three-year-old, and we’re curious how he’ll fare on Sunday.

The competitive field comprises other interesting runners who might catch the more preferred runner off the guard, for example, mare Highland Princess. Amilcar could be the best of the locals.

Naval Crown, who’s been consistent, is classy, and shouldn’t be stopped even by the typical French softer ground.

Fourteen three-year-old fillies will line up for this G1 held over the distance of a mile and three furlongs. On the turf surface, Toy is currently the leading chance to strike gold in the €500,000 event as the brilliantly bred chestnut has recently finished second in the Irish Oaks.

The Aidan O’Brien filly broke her maiden at the third attempt in 2022, and in a great fashion so, upon which she couldn’t keep up with her rivals both in the French 1000 Guineas and French Oaks. Last time out, she showed affinity toward longer distances as her effort in the Irish Oaks in Curragh was great, getting bettered only by Magical Lagoon.

That happened three weeks ago, which could be long enough rest before going for another Classic tilt; however, she’ll face some less exposed fillies who might use their freshness to leave the Irish raider behind.

Nachtrose looks to be the strongest of the locals, as after bagging her debut, she emulated her mother’s victory in the G2 Oaks d’Italia at the San Siro Race Course. The Peter Schiergen bound filly seized the front right away, and under Bauyrzhan Murzabayev, the chestnut set the pace and didn’t allow any of her rivals to pass her by at any given moment.

In the final stretch, she smoothly drew clear to record a Classic triumph by three lengths. The talented filly should be definitely considered for the German Oaks, but the same applies to Wagnis. Markus Klug sends in five contestants, with Wagnis giving the impression of the best of them thanks to her impressive win in the G3 Diana Trial over a mile and quarter.

Her subsequent 11th place in the German Derby didn’t boost confidence in her, though, as some of her Sunday rivals bettered her back then, especially Mylady who was tenth, indeed, yet only three and ½ length behind the victor.

Regarding Markus Klug’s trainees, Well Disposed and Mountaha finished first and second in another Classic trial in July, suggesting they could be in fine forms ahead of the Oaks. Moreover, Well Disposed is a half-sister to two German Derby winners – Windstoss and Weltstar.

Nachtrose, a half-sister to G1 victress and a trainee of the German legend, Peter Schiergen. She’s classy, gets the distance, and should also be well rested.