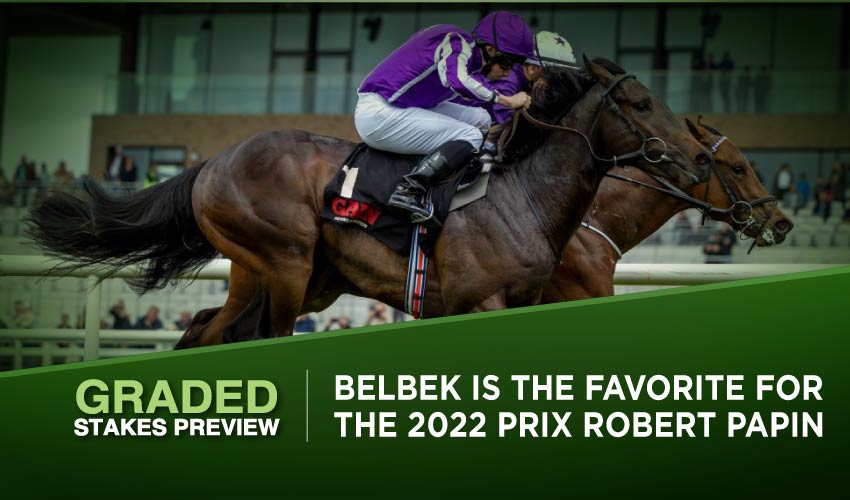 On Sunday, a trio of Graded races is held at the French racecourse in Chantilly. Two-year-olds head into the G2 Prix Robert Papin, where Blackbeard attempts to score a G2 victory on the third try, while three-year-old fillies will line up for the G3 Prix Chloe. In the end, three-year-old and older horses will show up in the G3 Prix Messidor.

This G2 turf race is open to two-year-old colts and fillies who will cover the distance of six furlongs here. The purse of €130,000 attracted a field of six participants, including Blackbeard trained by Aidan O’Brien.

The son of No Nay Never has already five starts under his belt as after bagging his maiden, Blackbeard also succeeded at the Listed and G3 stage, where he showed off a brilliant turn of foot. Something similar was expected of him in the G2 Coventry Stakes, yet he managed to grab only fourth place, upon which he was given another chance to score in a G2 as he rallied in the closing stages of the Railway Stakes; however, one of his rivals bettered him once more.

Therefore, Blackbeard still waits for his second Graded victory and even though he actually could snatch it up on Sunday, a couple of defeats somewhat impacted his credibility. The Antarctic is another Ireland bound raider here but doesn’t seem appealing much as last time out; he was third in a Listed at Tipperary.

The locals rely especially on Belbek trained by Andre Fabre. The son of Showcasing broke his maiden at his second attempt and then delivered in a G3 race over six furlongs. Back then, it took some time before the colt made a move; still, he had plenty to offer and definitely looked ready for a fiercer competition alongside Lova, who got defeated by Belbek by a length and a half.

Bottle of Bubbles has already bagged a G3 race, too, when succeeding in Italy after she ran in second at the Listed level, where Vicious Harry achieved the same place in June. In that event, the Spanish raider bettered even Bottle of Bubbles.

Blackbeard despite his recent couple of losses. If he shows the turn of foot he is capable of; robust Belbek might find him too quick.

Six contestants line up also for this G3 turf race where three-year-old fillies vie for the purse of €80,000. They will cover the distance of a mile and a furlong, while there are three participants with some Classic experience under their belts.

The Yann Barberot bound Daisy Maisy looks to be the most exciting filly here, given last time out, she finished sixth in the French Oaks – the G1 Prix de Diana. As a two-year-old, she suggested some talent which she affirmed when finishing second in a Classic trial in April, upon which she showed up in the French 1000 Guineas.

Its quality was a bit questionable except for the second Cachet; still, Daisy Maisy was fifth and more or less lived up to her standard in the Oaks. The distance should suit her, and her class should be enough to record a G3 without a doubt. Tariyana is the second contestant who ran in a Classic race as the chestnut finished second in a Listed and then was eighth in the French Oaks.

The field quality was too much for her at this stage as, indeed, the Francis-Henri Graffard filly has hit the track three times; however, when looking at her pedigree, she should be fine with the distance, and there is a certain class about her.

Sippinsoda tried her luck in the G1 Prix Saint-Alary, but in a field of six fillies, she managed only fourth place and given her previous best was winning a small race, she doesn’t look appealing in the Prix Chloe.

The same applies to maiden winners Bumble Bee and Mascaret; still, the latter is a Godolphin bound filly trained by Andre Fabre, and therefore, she might spring some surprise. The last to mention is Indian Wish, who ran fifth in the G2 Prix de Sandringham among eight participants and, being a Listed scorer, she could snatch up a good place.

Daisy Maisy, who has boasted the most class of the fillies and scoring a G3 shouldn’t be a tough task for her.

The last Graded race of the card lured in a field of seven three-year-old and older horses who will cover the distance of a mile. In this G3 turf race, Wally looks like the leading chance to earn most of the purse of €80,000 as his most recent effort piqued some interest.

The Jean-Claude Rouget trained grey recorded two G3 victories in 2021 and also added a G2 triumph in Italy, while in the ongoing season, the five-year-old gelding ran in fifth in a Listed race and then showed up in the G1 Prix d’Ispahan.

Back then, he travelled in the rear and thanks to his finish, the son of Siyouni grabbed second place behind victorious Dreamloper, who then flopped in the G1 Pretty Polly Stakes. Still, such a performance was respectable, and on Sunday, Wally could add a third G3 victory to his record.

Basically, there is just one participant whose class seems to be similar to Wally’s – Longvillers. The four-year-old colt trained by Yann Barberot concluded the season 2021 with third place in a Listed, while in May 2022, he finished second at the same level at Longchamp.

Last time out, he took sixth place in a Listed race, yet lost by a smaller margin to the victor than Wally, who also bumped into him and is at the Listed stage. Still, he’d prefer softer ground.

Sky Power was seventh behind Longvillers back then and looks slightly more appealing here than Axdavali or once G1 placed Millebosc.

The field also comprises two Spanish raiders, Robadallo and Simply Striking. The latter delivered three respectable performances in 2022, both in Spain and France. The six-year-old gelding could actually be the one threatening Wally the most here as he’s in form and is quite consistent.

Wally due to his fine performance at the G1 stage, which could suggest he’s ready to score another G3 race. Simply Striking looks like a viable placing option.