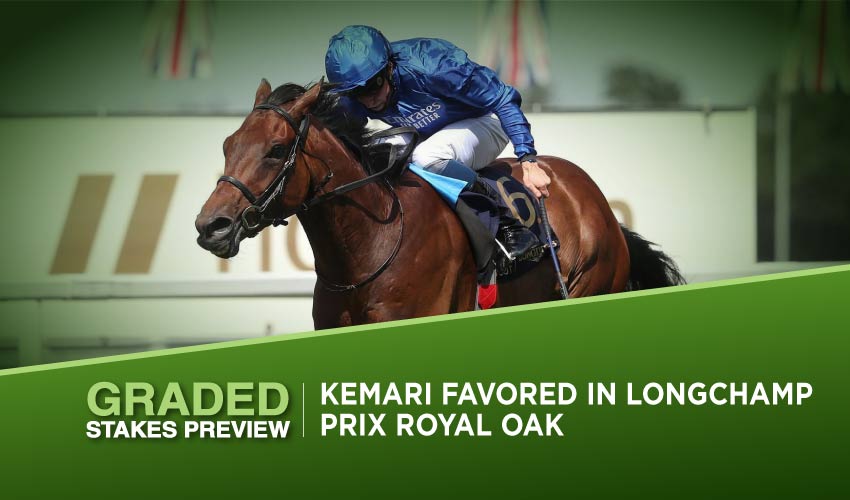 The end of the European flat season is the time for super stayers to clash once again at the highest level as Longchamp provides them with a perfect opportunity in the Prix Royal Oak. The last year’s winner, Subjectivist, is still on the sidelines, while other big names are absent as well, and therefore, the race is very open and seems to award one of the consistent stayers their first G1 win.

The Prix Royal Oak is the pinnacle of Sunday’s card; however, some interesting action is about to happen also at Saint-Cloud on Saturday; in other words, two G1 races attracted exciting fields of two-year-olds.

The first of two races for two-year-old horses is held at the distance of a mile, while €250.000 is up for grabs. The turf surface is supposed to reach good to soft, on which 7 participants will attempt winning the G1 event, while Angel Bleu (17-10) has already scored at the highest level.

The Ralph Beckett bound colt bagged three victories at the beginning of his career, but then his premiere at the Grade scene didn’t go according to the plan. Still, he showed fine effort in a Listed race and proved to be a talented junior by winning the G2 Vintage Stakes over 7 furlongs.

Angel Blue also suggested he needs soft ground to be at his best, which played to his cards once again at Longchamp – the son of Dark Angel fought well to score the G1 Prix Jean-Luc Lagardere on the heavy ground. For the very first time, Angel Bleu is about to try the mile distance, so even though he’s hugely respected, Ancient Rome (17-10) looks stunning for Saturday’s race, too.

The Andre Fabre’s charge didn’t hesitate when winning races on surfaces ranging from firm to heavy, including a G3 victory at Longchamp. Back then, he scored at the distance of a mile and was shortened then to attempt the G1 Prix Jean-Luc Lagardere, where he was finishing late to grab third place.

His performance wasn’t disappointing in the slightest, given he used everything he could to close the gap between him and the front. Therefore, Ancient Rome is considered the one to relish a bit longer trip; moreover, he doesn’t care much about the ground he’s running on.

The race also attracted a couple of fillies, while Oscula (11-1) has been a very decent junior for her connections. Trained by George Boughey, she’s run nine times, won a G3 over 7 furlongs, took two third places at the G2 level, and last time out, she finished third in the G1 Prix Marcel Boussac behind Zellie.

She isn’t expected to better the mentioned colts, but she could earn some money once again. The second filly is Purpleplay (9-1) trained by Cedric Rossi who pointed the progressive bay towards quite a rich race called Haras de Bouquetot – Criterium Arqana over a mile. Purpleplay won it easily by four lengths, and she might be even good enough to have a say in Saturday’s event. Aidan O’Brien relies on G3 winner Glounthaune (5-1), sixth in the G1 Dewhurst Stakes, and G3 fourth Aikhal (9-1).

Our Horse Racing Pick for the Criterium International is: Ancient Rome as he’s classy, performs on any ground, and should benefit from the mile distance.

The longest G1 race for two-year-olds in France attracted a field of 9 juniors who are about to compete for the purse of € 250.000 at the distance of a mile and a quarter. On the turf surface, three Grade winners will hit the track in this race as all El Bodegon (13-2), Dreamflight (5-1), and Goldspur (2-1) have scored at the G3 level.

The former is trained by James Ferguson and have run mainly at the softer ground, winning two of his four starts, including the G3 Prix de Conde at Chantilly in September. Back then, he attempted the distance of a mile and a furlong for the first time and scored easily when taking command in the final stretch after he spent the race in second place. Still, he looked quite green, unlike Godolphin’s Goldspur.

Not only does Charlie Appleby’s two-year-olds have great form in 2021, but also the bay possess a remarkable portion of determination with which he fought for his G3 victory at Newmarket. Showing the way from the start, Goldspur was outrun by some of his rivals in later on, but he found some more in the tank, battled heartily, and scored a win by a head in the end.

Such a tough outing could’ve left a mark on him, but as it was said, it’s not a reasonable thing to underestimate Appleby’s juniors in 2021. Unconquerable (4-1) trained by Joseph O’Brien was the one bettered by Goldspur at the distance of a mile and a quarter, however, he only proved to belong among the classy youngsters who always tries hard in the finish. He’s yet to win a Grade race, but he’s placed three times in a row in strong competitions. If the ground goes softer, it won’t play to his cards, though.

The last G3 winner to mention is Dreamflight, who prevailed on the soft ground in October, but even though he’s in the mix, some less experienced participants might spring a surprise. Dillian (25-1) is the lowest-rated contestant, yet his only victory came at Saturday’s distance and was very easy, while Stone Age (11-1) should display his class when the ground remains good to soft. He’s finished second in the G2 Champion Juvenile Stakes, after all.

Our Horse Betting Pick for the Criterium Saint-Cloud is: Goldspur, who has successfully covered the distance, and the ground changes shouldn’t affect him.

The peak of Sunday’s card at Longchamp offers the purse of €350.000 to super stayers who are about to clash at the distance of a mile and seven and half of a furlong. On a very soft turf ground, among three-year-old and older horses, Charlie Appleby’s charge should be taken into consideration once again as three-year-old Kemari (9-2) struck as an exciting stayer during his spring campaign.

The bay gelding was pointed at the G2 Queen Vase over a mile and 6 furlongs, where Kemari showed an eye-catching turn of foot, thanks to which he scored his first Grade victory. Most notably, he did so in front of Wordsworth; he used to be perceived as one of the leading chances for the St. Leger. After a certain break, Kemari disappointed in the G2 Great Voltigeur Stakes.

Still, last time out, his effort at Lonchamp was respectable when taking close second place, handling even the longer distance very well. Kemari simply seems to be a talented, super stayer in the making; moreover, he’s demonstrated he doesn’t mind heavy ground.

Still, there’s another exciting three-year-old in the field named Scope (13-2) who finished sixth in the St Leger and at the beginning of October, he demolished a competition of the mile and 6 furlong-long Listed. Overall, his result seems very promising regarding his attempt at such trips, so also Scope is one to consider here.

Although the pair of three-year-old carries less weight than the older participant, five-year-old Skazino (5-1) has had a great season so far, providing his trainer Cedric Rossi with two G2 triumphs among super stayers. The chestnut gelding also showed up at the Prix de l’Arc de Triomphe meeting where he ran in the Prix du Cadran over four miles, while Skazino sort of delivered what was expected of him – finished fourth behind likes of Trueshan and Stradivarius.

He’s not as good as them, but Sunday’s competition shouldn’t be much of a problem for the talented horse. He’s definitely in the mix together with Valia (5-1), who he met twice this year, and their class seems to be more or less equal.

In October, four-year-old Valia took third place in the G1 Prix de Royellieu and is another participant whose victory wouldn’t spring any surprise. In fact, neither of the mentioned horses would, including five-year-old Search For a Song (4-1) who wasn’t at her best when attempting the third win in a row in the G1 Irish St Leger. However, she destroyed the competition in the G3 race over two miles, which happened only two weeks after the flop. There’s still might be something about her, but she’s always looked comfortable on firmer grounds.

The last duo to mention consists of former star stayer Call The Wind (11-1) and Glycon (9-1), who scored G3 and G2 victories in his previous two starts, and being a five-year-old, he’s about to tackle G1 company for the first time. He’s interesting but needs to prove he has the class to have a say in Sunday’s race.

Our Horse racing prediction for Prix Royal-Oak is: Skazino due to his fine effort in the Prix du Cadran and Cedric Rossi’s stable form.

Get a Daily Rebate and make sure to stay tuned for the latest racing odds, and racing entries.