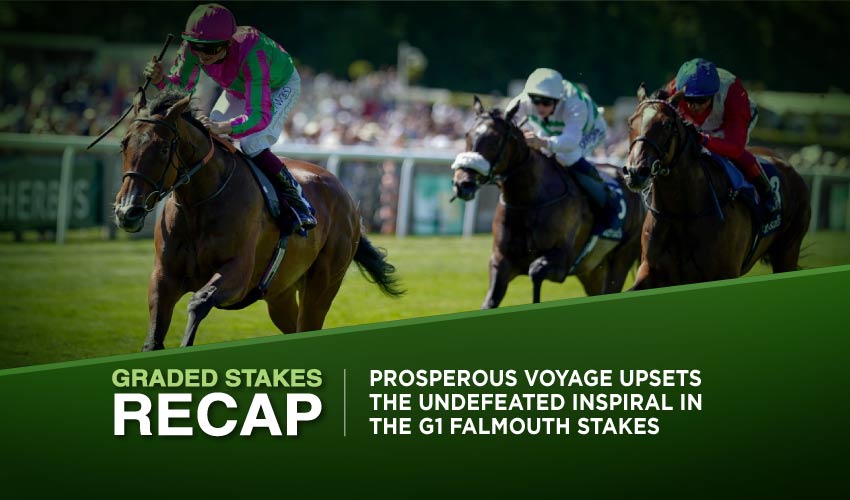 Strange things can happen between gate and wire and they certainly happened in the feature G1 Falmouth at Newmarket on Friday, when 1-7 shot Inspiral meekly gave up her unbeaten record behind upset winner Prosperous Voyage. There was another surprise – although not on that earth-shattering level – when Mawj led all the way to win the G2 Duchess of Cambridge.

One of the biggest upsets in a Group race for more than 30 years left Newmarket stunned on Friday, as 1-7 favourite Inspiral was outrun by 16-1 poke Prosperous Voyage in the Falmouth, the highlight of the afternoon.

Royal Ascot heroine Inspiral, hitherto unbeaten in six including two G1s, was never travelling particularly sweetly, and although she put her head in front at the quarter-pole it was a short-lived effort. She floundered, and was easily run down inside the final furlong by rallying early leader Prosperous Voyage, who won going away under Rob Hornby by a length and three-quarters. Sandrine was third, a length further back; the time was a tick over 1:36.

Inspiral is the joint-shortest-odds horse to be beaten in a Group race in Britain and Ireland since 1988, when the Racing Post’s records began. The world record in a G1 belongs to Hong Kong superstar Golden Sixty, who was beaten at 1-100 at Sha Tin in January.

“She ran flat,” said trainer John Gosden. “The ground was plenty quick for her, but we’ll freshen her up, give her a break, and go again.”

Inspiral’s shock defeat detracted a little from the achievement of Prosperous Voyage, who was making her breakthrough at the top level after two near-misses. This was her first success since she lost her maiden tag, but she had hit the board four times at Group level since then and wasn’t winning out of turn.

“It’s a horse race and anything can happen,” said trainer Ralph Beckett [pronounced Rafe]. “The key to her is a straight track. She ran her race today, and that’s all that matters.”

Prosperous Voyage will now be aimed at the G1 Sun Chariot, over a straight mile on Newmarket’s spring/autumn track, on October 1.

The 4-1 third-choice broke on top under Ray Dawson and was never headed, turning back the sustained challenge of the favourite Lezoo in the last half-furlong to score by a half-length, stopping the clock in 1:11. Queen Olly was a length and three-quarters further back in third.

Mawj drifted left under Dawson’s drive and pushed Lezoo left too, but the stewards considered that the interference had not affected the outcome, allowing the result to stand and suspending Dawson for three days.

It was a welcome big-race win for Godolphin trainer Saeed bin Suroor, whose fortunes have waned in the last few years following decades of top-level success. He will point Mawj at the six-furlong G1 Cheveley Park, on the other track at Newmarket, on September 24.

Follow us on Social Media for Prosperous Voyage updates!