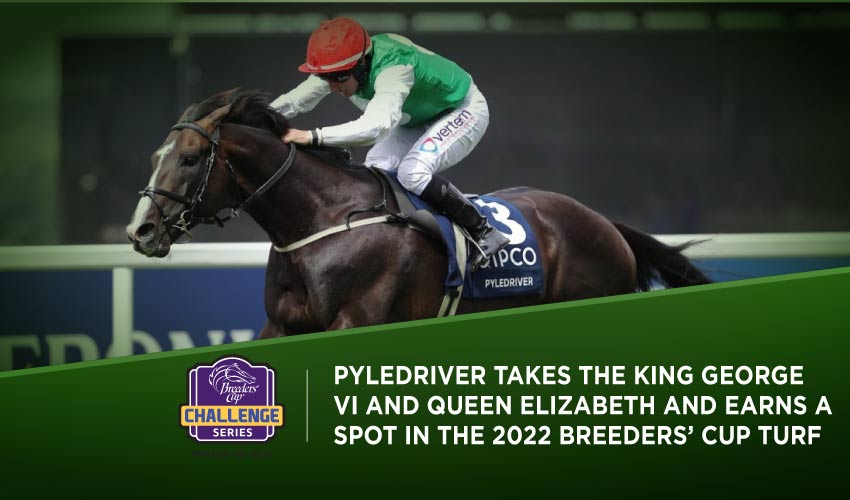 On Saturday, one of the pinnacles of the summer part of the British Flat season was held at the Ascot Race Course – the mile and a-half-long King George IV And Queen Elizabeth Qipco Stakes. The biggest outsider, Pyledriver, caught his rivals off guard here and continued his fairy-tale of a horse nobody wanted as a yearling. Lezoo then succeeded in the G3 Keeneland Stakes, and Jumbly prevailed in the G3 Valiant Stakes.

Two-year-old fillies clashed in this G3 turf race, offering the purse of £60,000, and after covering the distance of six furlongs, favorite Lezoo (6-5) scored her premiere Graded victory. She was a bit slow into the stride, but under Frankie Dettori, she quickly got into a satisfactory position from which she attacked in the closing stages. The Ralph Beckett bound bay displayed the best turn of foot here and bagged the race in 1m 14.07s, with Kinta (7-1) being a decent rival to her, always trying to get closer, but in the end, she had to settle for second place a length behind the victress. Breege (12-1) flew by the field to snatch up third place.

Lezoo looks like a promising two-year-old as out of four stars, she collected three wins and a second place in the G2 Duchess of Cambridge Stakes. Thanks to that performance, the daughter of Zoustar was preferred for the Keeneland Stakes, where she didn’t disappoint, bettering Kinta easily.

The G3 turf race lured in a field of nine three-year-old fillies who clashed over the distance of a mile. Vying for the purse of £80,000, Novemba (6-1) seized the front initially and remained first until the final stretch, where Oscula (4-1) successfully challenged her, yet she was denied the victory right at the wire by Jumbly (100-30). The Harry & Roger Charlton trained bay traveled in the rear of the field, but Hollie Doyle aboard managed to find some room to move her mount forward, and subsequently, Jumbly passed by all her rivals to catch Oscula by a nose. Scoring the race in 1m 42.32s, Jumbly prevailed in front of second Oscula and third Novemba.

The victorious daughter of Gleneagles scored in Listed as a two-year-old and entered the new season with second place in a Classic trial; however, she then failed to impact both European 1000 Guineas she ran in. On Saturday, she enjoyed the drop in the class and quite benefited from Hollie Doyle’s patient ride when achieving her premiere Graded success. Oscula focused on Listed races in the ongoing season yet showed she’s still capable of delivering great efforts at the G3 stage. Novemba didn’t run a bad race for Germany as well, unlike favorite Zanbaq (7-4), who faced some room issues. Subsequently, she couldn’t quicken up enough and had to settle for fifth place, being defeated also by the biggest outsider, fourth Serenading (100-1).

The treasured G1 turf race had its favorites in three-year-olds who should’ve been better than the older participants; however, the couple utterly failed in this £1,250,000 feat as Pyledriver (18-1) defied the odds and scored over the distance of a mile and a half. Piloted by PJ McDonald, the handsome five-year-old commenced the race at the front but gradually lost the lead, then settled and saved up some energy for the final stretch, where he bolted up beautifully. The William Muir and Chris Grassick bound bay took command and drew clear from the rivals, and despite Torquator Tasso’s (16-1) charge, Pyledriver managed to stay on top quite easily. Crossing the wire in 2m 29.49s, he caused an upset as the son of Harbour Watch was the biggest outsider who scored the race in front of the second biggest outsider, Torquator Tasso, with Mishriff (5-2) running in third.

The rather cheaply bought Pyledriver has always been a smart horse as in 2020, he achieved two G2 triumphs, and last season, he prevailed in the G1 Coronation Cup; moreover, he earned some money during his travels to Hong Kong and Dubai. Last time out, he finished second in the Coronation Cup, but when looking at Saturday’s card, he just wasn’t expected to fight for the win by most. Pyledriver proved them wrong, though, and succeeded by 2 and ¾ over Germany-bound Torquator Tasso, the Prix de l’Arc de Triomphe winner.

Mishriff came home in third after a slow start, with Broome (18-1) running in fourth. The couple of three-year-olds were too keen as Westover (13-8) set the pace but weakened in the final stretch to finish fifth, bettering only lacklustre Emily Upjohn (3-1).