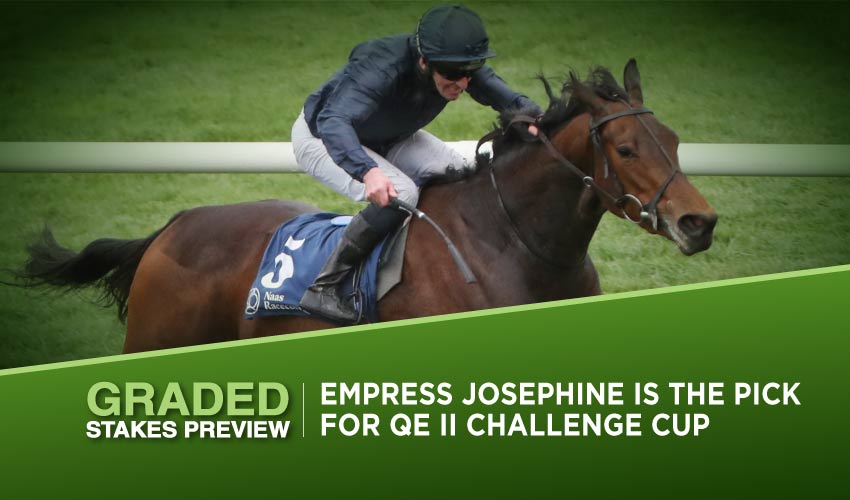 The spotlight falls brightly on Keeneland this weekend, where the return home of the speedy Campanelle in Friday’s feature takes second billing to a stellar contest for the QE II Challenge Cup on Saturday. This Grade 1 brings together high-class fillies from the US, Britain and Ireland, notably Shantisara and Empress Josephine, turning it into a spicy appetiser for the Breeders’ Cup in three weeks’ time.

The Breeders’ Cup is three weeks away, but the QE II Challenge Cup – not only the feature race at Keeneland on Saturday but the highlight of the weekend nationwide – wouldn’t look out of place at Del Mar next month, such is its quality and competitive nature, with the added piquancy of the home team taking on challengers from Britain and Ireland.

The in-form Chad Brown, always a factor on turf, takes two shots at the target with both Shantisara and Technical Analysis coming here looking for a three-timer. Shantisara (7-2) stepped up to a mile and three-eighths to win the Jockey Club Oaks at Belmont Park last time, her best performance since emigrating Stateside from France.

She won the Grade 3 Pucker Up at Arlington over this distance on her previous start, and will likely sit behind the pace set by barnmate Technical Analysis (4-1), who wired the field to win the Grade 2 Lake George at Saratoga in August. That was her second Graded win at the Spa this summer and a performance at least the equal, if not better, than Shantisara’s Belmont score.

The inexperienced and unbeaten Lady Speightspeare (8-1) will also be a pace factor judging by her all-the-way allowance win at Woodbine, her first outing for 12 months after winning the Grade 1 Natalma, also at the Toronto track, the venue for all her three starts.

Brad Cox steps Burning Ambition (6-1) into the big league, as she bids to take her winning streak to five following a seven-length strike in a stakes race at Indiana Grand. She needs to move up a mile from that but is definitely going the right way, a statement that also applies to Flippant (15-1), who chases a four-timer after a strong performance to win a stakes at Colonial Downs last time, and hat-trick-seeking Queen Goddess (30-1), who leaves Del Mar for the first time after wins in maiden and allowance company.

Del Mar Oaks runner-up Closing Remarks (8-1) brings Grade 1 form to the table, but that performance was a big step up on her previous level – she has never won a Graded stakes, and only won one minor stakes – and it remains to be seen whether she can confirm that status in this much deeper contest.

The transatlantic contingent is led by Empress Josephine (3-1), who has stuck around Stateside after filling third spot in the Grade 1 First Lady here a week ago. That marked a return to her earlier top-level form in Ireland, where she won the Group 1 Irish 1,000 Guineas over a mile in the mud in May, and the way Empress Josephine finished off her race strongly last week, nearest at the wire and beaten only a length in total, suggests that the extra furlong here could prove ideal. The addition of first-time blinkers may be a masterstroke.

She is preferred to her compatriot Nicest (10-1), whose exceptional pedigree and previous race record indicate that this substantial drop in distance is unlikely to bring out the best in her.

British contender Cloudy Dawn (15-1) steps up in both grade and distance after turning in a battling display to win the Group 3 Prix de Lieurey at Deauville in August, her first success at Group level. The runner-up there has won since, and top trainer William Haggas is not one to waste time and energy sending her here unless he reckoned she had a live chance. Any easing in the ground would be to her advantage.

Betting Prediction for Queen Elizabeth II Challenge Cup: and the choice is EMPRESS JOSEPHINE, who can build on her fine effort at this track last weekend.

A European influence also comes to bear on Friday’s feature, the Franklin County, in which Campanelle (7-2) returns from a sojourn overseas to pick up the thread at home.

Wesley Ward’s flying filly has run more often in Europe (four) than she has in the US (two), and a repeat of her performance at Royal Ascot in the Group 1 Commonwealth Cup, which she was awarded on disqualification after a narrow defeat, would leave these rivals chasing shadows. However, she ran a shocker in a Group 1 at Deauville in August, finishing last of 12, which slightly tempers confidence in her chance here.

She faces sturdy opposition in the shape of the first three home in the Grade 3 Mint Ladies Sprint at Kentucky Downs last month, in which In Good Spirits (9-2) beat Catch A Bid (5-1) by two lengths with Lagertha (20-1) a half-length away third, with Violenza (30-1) in sixth and Yes It’s Ginger (6-1) in ninth.

That was arguably a lifetime best for In Good Spirits and if Campanelle is not on her A-game she will pose a big threat, as will Yes It’s Ginger, whose two stakes wins before her Kentucky Downs eclipse – many horses are not suited to that track – give her good credentials in this company, notably her defeat of Elle Z (8-1) in the second of those victories.

Change Of Control (4-1) was fourth in this race 12 months ago and beat In Good Spirits comfortably when landing a stakes over course and distance in April. She was in the wrong race when last in the Grade 1 Woodbine Mile latest, but should give a good account now back sprinting.

Dual stakes winner Lead Guitar (10-1) was runner-up in a Saratoga stakes at this distance on her most recent start, just her second of 2021, and may be a play for exotics bettors.

Betting pick for the Franklin County: CAMPANELLE who – if her poor recent run at Group 1 level in France can be forgiven – is a confident selection down in grade.

Join us at JazzSports and make sure to stay tuned for the latest horse racing odds and racing entries. Take a look at our Horse Racing Guide.