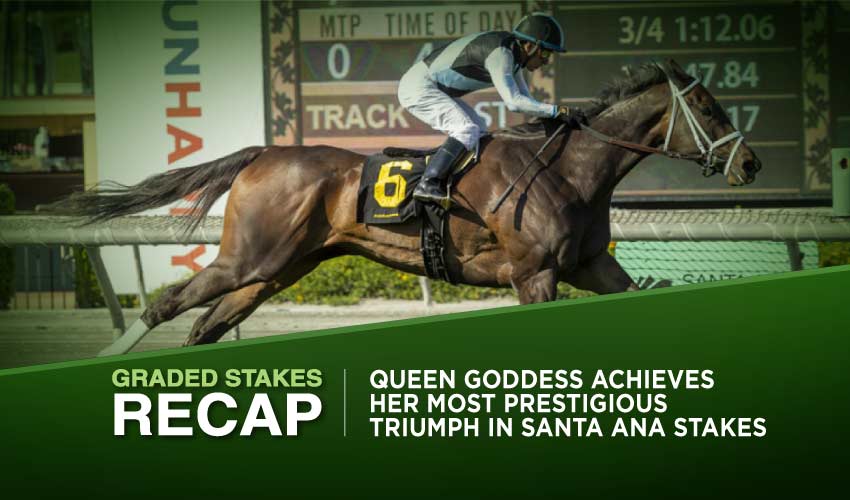 On Saturday, four-year-old fillies and older mares met up in the G3 Santa Ana Stakes at the Santa Anita Racecourse. Going to Vegas attempted her second triumph in the race on the turf surface, but Queen Goddess was strongly against and won under a great ride delivered by Victor Espinoza, reminding everybody of the fact she is actually the G1 winner and should always be taken seriously.

The G3 turf race was held at the distance of a mile and two furlongs where Going to Vegas (2-1) was expected to repeat her last year’s victory and become a back-to-back winner in this $125,000 event.

In the field of eight four-year-old fillies and older mares, the favourite settled in the midpack, from where she rallied forward in the final stretch, but she bumped into quite an unexpected challenge from Queen Goddess. Victor Espinoza just prepared his mount, four-year-old Queen Goddess (73-10), a superb trip.

The victress of the G1 American Oaks galloped in second place, and once the leader was weakening, Queen Goddess swung to the front, kept her distance from the rest of the field, and struck gold in 1m 59.72s by 1 and ½ of a length. Preferred Going to Vegas managed to hold on to second place at the fence but just by a nose from Neige Blanche (74-10), flying on the outside.

The victorious four-year-old filly has achieved her most prestigious triumph in the mentioned American Oaks, but as she finished only fifth in her 2022 debut, she was sort of underestimated for Saturday’s race. Victor Espinoza helped her a lot on her journey towards winning the Santa Ana Stakes, but the daughter of Empire Maker definitely displayed she’s still capable of winning Graded events.

A fierce fight for the second place unfolded behind the Michael W. McCarthy bound filly as Going to Vegas used the inside track to charge forward and was clinging to the second position. At the same time, Neige Blanche once again showed off her brilliant turn-of-foot and she worked hard on the outside to close on her rivals in time.

Although she didn’t catch second Going to Vegas by a nose, she again performed well and proved to belong among such a company. In the tight finish, Closing Remarks (14-5) had to settle for fourth place in front of the fifth Keyflower (89-10). The remaining trio of participants was no match for the mentioned quintet.

Follow us on Social Media for Santa Ana Stakes updates!